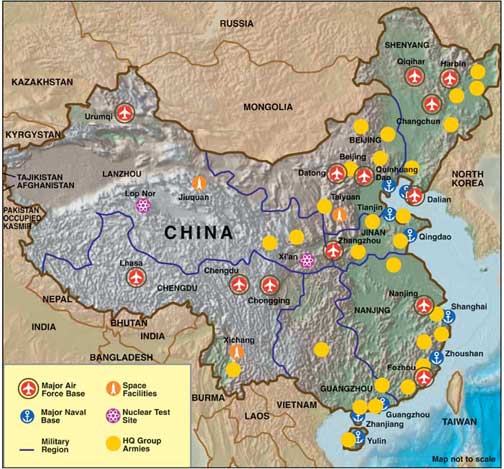 Ideally, the Chinese believe that the east-wind should prevail over the west-wind. However, despite their imperial calculations of the past, they lag behind the West, particularly America, by many decades. Hence, they want the east-wind to at least prevail over the other east-wind, i.e., India, to ensure their dominance over Asia. Beijing’s cleverly raising the hackles on its fabricated dispute in Arunachal Pradesh to an alarming level, is the preparatory groundwork for imposing such a conflict on India. A sinking Pakistan will team up with China to teach India “the final lesson”.

The Chinese leadership wants to rally its population behind the communist rule. As it is, Beijing is already rattled, with its proxy Pakistan, now literally embroiled in a civil war, losing its sheen against India. Above all, it is worried over the growing alliance of India with the United States and the West, because the alliance has the potential to create a technologically superior counterpoise.

Keeping in view the imminent threat posed by China, the quickest way to swing out of pacifism to a state of assertion is by injecting military thinking in the Civil Administration to build the sinews.

All these three concerns of the Chinese communists are best addressed by waging a war against pacifist India to achieve multiple strategic objectives. But India, otherwise the biggest challenge to the supremacy of China in Asia, is least prepared on ground to face the Chinese threat.

How will India repel the Chinese game plan? Will Indian leadership be able to take the heat of war? Have they laid the groundwork adequately to defend India? Is the Indian military equipped to face the two-front war by Beijing and Islamabad? Is the Indian Civil Administration geared to meet the internal security challenges that the external actors will sponsor simultaneously through their doctrine of unrestricted warfare?

The answers is an unequivocal ‘NO’. Pacifist India is not ready by a long shot either on the internal or the external front.

It is said that long time back, a king with an excellent military machine at his disposal could not stomach the violence involved in winning wars. So he renounced war in victory. This led to the rise of the pacifist philosophies. The state either refused to defend itself or neglected the instruments that could defend it.

Any ‘extreme’ is dangerous, as it tends to create imbalance in statecraft.

We saw that in the unjust unilateral aggression in Iraq. It diminished the American aura and recessed the economy. China’s despotic regime is another extreme, scared to permit political dissent. This will fuel an explosion worse than the Tiananmen Square. Despite the use of disproportionate force and the demographic invasion of Tibet, Beijing’s hold remains tenuous. Pakistan’s over-aggressive agenda in the name of jihad haunts it now to the point of fragmentation of the State.

Similarly, India’s pacifism is the other extreme. 26/11s will occur on a regular basis as it infects policy-making. Such extreme postures on either side invariably generate wars. Armed with an aggressive Wahabi philosophy, Pakistan, in cohort with China, wants to destabilize a pacifist India. India’s instruments of state steeped in pacifism are unable to rise to its defence.

In the past sixty years, the deep-rooted pacifism contributed to the Civil Administration, ceding control of forty per cent of the Union’s territory to the Maoists and ten percent to the insurgents, effecting a shrinking influence internally, as well in the ‘near abroad’.

India must rapidly shift out from its defeatist posture of pacifism to deter China. New Delhi’s stance should modify, not to aggression, but to a firm assertion in statecraft. The state must also exclusively retain the capability of intervention by use of force internally as well as externally. If it permits the non-state actors to develop this capability in competition, then the state will whither away. On the contrary, the state machinery should ensure a fast-paced development in the Red Corridor even it if has to hold Maoists hostage at gunpoint. The state’s firm and just intervention will dissolve the Maoist movement.

Keeping in view the imminent threat posed by China, the quickest way to swing out of pacifism to a state of assertion is by injecting military thinking in the Civil Administration to build the sinews. That will enormously increase the deliverables on ground – from Lalgarh to Tawang.

Illusion of “China’s Attack on India Before 2012″

The 2000 km border between China and India has been a notable absence from press headlines in the years since then-Indian PM Vajpayee’s 2003 visit to Beijing. Tensions, however, have risen again as India announced last month a plan to deploy two additional army divisions and two air force squadrons of Su-30 Fighter Unit, some 60,000 soldiers in total, in a disputed border area in the southern part of Tibet, which India claims as its state of Arunachal Pradesh.

Adding fuel to the flames is an article by Bharat Verma, editor of Indian Defense Review, predicting that China will attack India before 2012, leaving only three years to Indian government for preparation.

According to Mr. Verma, “growing unrest in China” due in part to economic downturn will leave the Chinese government looking for something to “divert the attention of its own people from ‘unprecedented’ internal dissent, growing unemployment and financial problems.” China will also want to strike India before the latter becomes powerful, which is the reason for the 2012 “deadline.” India, with its growing affiliation with the West, is yet weak under China’s fire.

But a “China’s attack” is not going to happen, and one wonders at the basis for Mr. Verma’s thinking. First, although it is true that China’s macro-economy has taken a hit from the global financial crisis, the extent of the damage is under control. Recent statistics shows China’s economy grew 7.1% in the first half of 2009, while its foreign exchange reserve has exceeded $2 trillion. China’s stimulus plan has been effective and given people confidence. China will survive the global downturn as well or better than the rest of the world’s economies.

…there is one scenario where there is possibility for war: an aggressive Indian policy toward China, a “New Forward Policy,” may aggravate border disputes and push China to use force — despite Chinas appeal, as far as possible, for peaceful solutions.
The answers lie mainly on the Indian side. Given Chinas relatively small military garrison in Tibet, Indians 60,000 additional soldiers may largely break the balance.

And even if China’s economy was really all that bad, would the government try to distract “unrest” by taking military actions against India? Mr Verma’s reasoning rests on a lack of documentation. Looking into the past 60 years, China has no record of launching a war to divert public attention from anything. Moreover, while Mr. Verma supposes the Chinese Communist Party has no cards to play other than “invading India,” the Party, widely experienced in dealing with domestic disputes, will hardly in only three years have run out of all options facing potential social instability. Moreover, even if Chinese leaders considered such an option, they would certainly be aware that an external war would severely jeopardize domestic affairs.

Other reasons the author mentions in the article are also vague. The Western powers would not take kindly to a Chinese conflict with India, leaving China rightfully reluctant to use force in any case other than extreme provocation. US forces well deployed in Afghanistan and Pakistan could check any China’s military action in South Asia. And then there is also the nuclear problem: there has never been a war between two nuclear equipped nations, and both sides would have to be extremely cautious in decision-making, giving more room for less violent solutions.

Further, it is important to realize there is no reason for China to launch a war, against India in particular. Economic development, rather than military achievement, has long been the consensus of value among China’s core leaders and citizens. Despite occasional calls to “Reoccupy South Tibet (occupied Chinese territory),” China’s decision-making is always cautious. It is not possible to see a Chinese “incursion” into India, even into Tawang, an Indian-occupied Buddhist holy land over which China argues a resolute sovereignty.

Last but not least, China’s strategy, even during the 1962 border war with India, has been mainly oriented towards the east, where Taiwan is its core interest, while the recent Xinjiang unrest highlights China’s growing anti-terrorist tasks in the northwest – both issues are more important than the southwest border. If China were to be involved in a war within the next three years, as unlikely as that seems, the adversary would hardly be India. The best option, the sole option, open for the Chinese government is to negotiate around the disputed territory.

However, there is one scenario where there is possibility for war: an aggressive Indian policy toward China, a “New Forward Policy,” may aggravate border disputes and push China to use force – despite China’s appeal, as far as possible, for peaceful solutions.

Consider the 1959-1962 conflict, the only recorded war between China and India in the long history of their civilizations. After some slight friction with China in 1959, the Indian army implemented aggressive action known as its Forward Policy. The Chinese Army made a limited but successful counterattack in 1962.

Now, it seems “back to the future”. Mr. Verma asserts another war will happen before 2012, a half century after the last, regrettable one. India has started to deploy more troops in the border area, similar to its Forward Policy 50 years ago. Is Mr. Verma’s China-bashing merely a justification for more troops deployed along the border? Will India’s “New Forward Policy”, as the old one did 50 years ago, trigger a “2012 war?”

The answers lie mainly on the Indian side. Given China’s relatively small military garrison in Tibet, Indian’s 60,000 additional soldiers may largely break the balance. If India is as “pacific” as Mr. Verma says, and is sincere in its border negotiation, China-India friendship will remain. After all, China shares a long and mostly friendly cultural exchange with India as well as other neighbors. Now China is seeking deeper cooperation, wider coordination, and better consensus with India, especially in the global recession, and peace is a precondition for doing so. China wants to say, “We are on the same side,” as the Indian Ambassador did in a recent interview in China. Thus, “China will attack India before 2012″ is a provocative and inflammatory illusion.

(Chen Xiaochen serves as a journalist of editorial and comments in China Business News.)