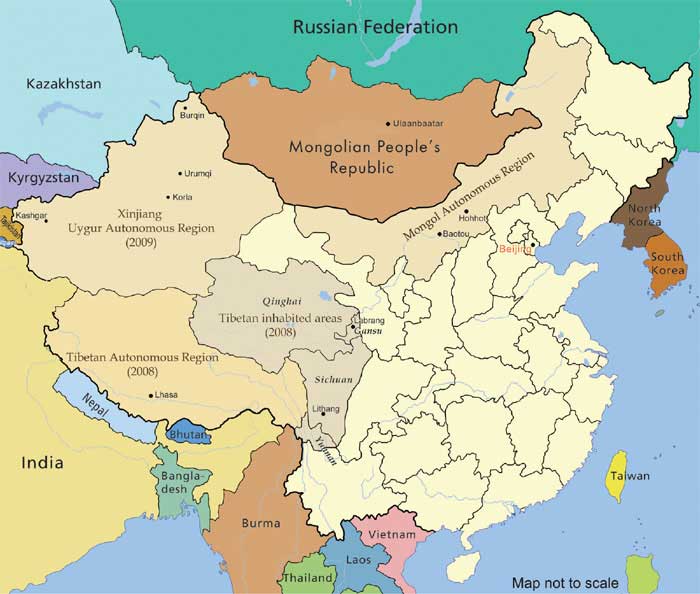 China will launch an attack on India before 2012.

There are multiple reasons for a desperate Beijing to teach India the final lesson, thereby ensuring Chinese supremacy in Asia in this century. The recession that shut the Chinese exports shop is creating an unprecedented internal social unrest. In turn, the vice-like grip of the communists over the society stands severely threatened.

Unemployment is on the rise. The unofficial estimate stands at a whopping fourteen percent. Worldwide recession has put thirty million people out of jobs. Economic slowdown is depleting the foreign exchange reserves. Foreign investors are slowly shifting out. To create a domestic market, the massive dole of loans to individuals is turning out to be a nightmare. There appears to be a flight of capital in billions of dollars in the shape of diamond and gold bought in Hong Kong and shipped out towards end 2008.

…the most attractive option is to attack a soft target like India and forcibly occupy its territory in the Northeast.

The fear of losing control over the Chinese masses is forcing the communists to compulsorily install filtering software on new computers on sale to crush dissent on the Internet, even though it is impossible to censor in entirety the flow of information as witnessed recently in Tibet, Xinjiang and Iran.

The external picture appears to be equally dismal. The unfolding Obama strategy seems to be scoring goals for democracy and freedom without firing a single shot. While Bush unwittingly united and arrayed against himself Islamic countries and radical Islam worldwide, Obama has put radical Islam in disarray by lowering the intra-societal temperature vis-à-vis America and the Muslim world. He deftly hints at democracy in his talk without directly threatening any group or country and the youth picks it up from there – as in Iran. With more and more Chinese citizens beginning to demand political freedom, the future of the communists is also becoming uncertain. The technological means available in the 21st century to spread democracy is definitely not conducive for the totalitarian regime in Beijing.

India’s chaotic but successful democracy is an eyesore for the authoritarian regime in Beijing. Unlike India, China is handicapped as it lacks the soft power – an essential ingredient to spread influence. This further adds fuel to the fire.

In addition, the growing irrelevance of Pakistan, their right hand that operates against India on their behest, is increasing the Chinese nervousness. Obama’s AF-PAK policy is primarily a PAK-AF policy. It has intelligently set the thief to catch the thief. The stated withdrawal from Iraq by America now allows it to concentrate its military surplus on the single front to successfully execute the mission. This surplus, in combination with other democratic forces, enables America to look deep into resource rich Central Asia, besides containing China’s expansionist ambitions. 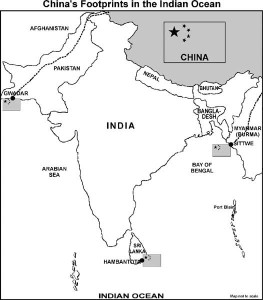 Chinese footprint in the Indian Ocean

To offset this adverse scenario, while overtly pretending to side with the West, the Chinese covertly ordered their other proxy, North Korea, to test underground nuclear explosions and carry out trials of missiles that threaten Japan and South Korea. The Chinese anxiety is understandable. Under Bush’s declared policy of being ‘a strategic competitor’ alongside the ‘axis of evil’, they shared a large strategic maneuverability with others of similar hues. However, Obama policies wisely deny such a luxury by reclaiming more and more international strategic space ceded by the previous administration.

The communists in China, therefore, need a military victory to unite the disillusioned citizenry behind them. This will assist in marketing the psychological perception that the 21st century belongs to China and assert their deep belief in the superiority of the Chinese race. To retain the communist party’s hold on power, it is essential to divert attention from the brewing internal dissent. In an autocratic system normally the only recipe to unite the citizenry is by mannpulating their nationalistic feelings. The easy method for Beijing to heighten the feeling of patriotism and forging national unity is to design a war with an adversary. They believe that this will help them to midwife the Chinese century. That is the end game rooted in the abiding conviction of the communists that the Chinese race is far superior to Nazi Germany and is destined to “Lord over the Earth”.

At present, there is no overall cost benefit ratio in integrating Taiwan by force with the mainland, since under the new dispensation in Taipei, the island is ‘behaving’ itself. Also, the American presence around the region is too strong for comfort. There is also the factor of Japan to be reckoned. Though Beijing is increasing its naval presence in the South China Sea to coerce into submission those opposing its claim on the Sprately Islands, at this point of time in history it will be unwise for recession-hit China to move against the Western interests, including Japan. Therefore, the most attractive option is to attack a soft target like India and forcibly occupy its territory in the Northeast.