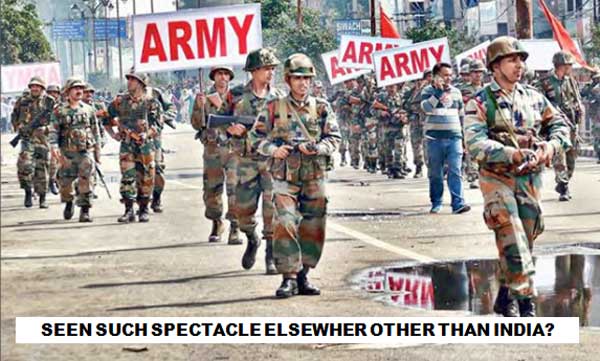 Recent media reports indicate that the Army has decided to do away with differences in the attires of officers above the rank of Colonel. The move is being hailed to usher in uniformity in uniforms, All Brigadier-rank officers and above are to wear the same beret, cap, shoulder badge, lanyard and belt; unlike the practice till now wherein depending on the regiment or corps that an officer belongs to, the colour of the beret, lanyard, colour of the belt and the badge on it are different.

The Army has a total of 42,913 officers, starting from the rank of a Lieutenant to the Chief of Army Staff having the rank of General. On commissioning, every officer is assigned a regiment or corps which has its own distinctive uniform and regimental or corps badge. For every officer, or for that matter every soldier, his/her uniform is a matter of immense pride. In proffering choices to opt for particular regiment or corps, uniform is an important factor for cadets undergoing training for becoming officers. For example, it is the lure of the maroon beret that invariably is the reason why cadets opt for the Parachute Regiment.

Currently, all rifle regiments like the Rajputana Rifles and Gorkha Rifles wear black-coloured badges of rank on their shoulders and buttons. The colour is silver for the Assam Regiment and brass for regiments like the Parachute Regiment and the Jammu and Kashmir Light Infantry (JAK LI). The colour of the beret also varies, for example, it is navy blue for the Corps of Engineers and green for the Gorkha Rifles.

Similarly all regiments/corps have different lanyards. Newspaper reports have quoted a senior Army officer, without naming him, in saying, “We have taken the decision to do away with differences in the uniform of officers from the rank of a Brigadier. The uniforms show your links with the regiment, arm or service that you belong to. But all of them are Indian Army officers, so there should be no difference. There should be no affiliation to the lanyard or the regiment.”

Newspaper reports further elaborate that the change for uniformity in uniform for Brigadier-level and above officers, to begin with, will commence with the dress that officers wear in the mess; mess dress, which is also different in winter and summer.

The Army has already received three types of samples of mess dress and a final decision on it is to be taken soon. This being mentioned as the “first step”, apparently the overall uniform change is to follow. Why the change in mess dress, why not change all uniforms of Brigadier and above officers together has not been elaborated.

Incidentally, the discussion on having the same width for cummerbund worn with mess dress by Army officers went on in the past without resolution for lack of consensus.

As a norm, plenty thought, time and effort is invested before any kind of change is affected in an organization.  Any change, even miniscule in nature, must accrue corresponding benefit to the organization, without which the change is of no use. In this backdrop, there is need to examine what positive difference will change of uniform of Brigs and above make, what will be the advantages and how will the Army benefit, given that different uniforms will continue for Colonel and below rank officers who form bulk of the officer corps.

The decision to bring uniformity in the dress of Brigadiers and above is aimed at stopping them from giving preference to their own regiment. But how will this play out when formation commanders will continue to have ADCs, MAs, MS from their units/regiments, and consequently continue to give preference to their units/regiments in matters within their powers?

The above is more so because of the mindsets of Chiefs percolating down, leaving much to desire; postings, promotions, honours and awards, ACRs etc are affected by preferences that run top to down. Even dropping a hint to look after so and so serves the purpose – which at times even travels down from word of mouth. One Chief used to openly say you tell me whom to promote. But by no means does this encompass ‘all’ Brigadier-level officers and above; there are many who remain very fair.

There have been extreme cases as well; a decade plus back, a Chief was dealing directly with the MS (X) keeping the ailing Military Secretary aside, and board results were sent home before being sent to MoD. Of course promotion boards many a time are also sent back by MoD for ‘additions’.

The change of uniform, as contemplated above, is unlikely to benefit the Army in any manner though it would sound good to government of the day and the public ignorant of matters military. The requirement is not to change the uniform but the mindset starting from the Army Chief downwards. It is this change that the Chiefs must imbibe and ensure through the Army.

The current change in uniform would be akin to renaming Army HQ as Integrated HQ of MoD (Army) with no integration worth the name. On the contrary, the change being affected may create a different class amongst the officer corps; Colonels and below and Brigadiers and above, which may even lead to different dining arrangements in mess functions in times to come.

An officer from the Parachute Regiment today receives an award from the President of India proudly wearing his maroon beret. With change of dress, he will lose that privilege if he is Brigadier-rank or above. It is a different matter that preference has even brushed specialization under the carpet already. For example, many Chiefs have indulged in posting non-Special Forces officers in the Additional Directorate General (Special Forces) of Military Operations Directorate at Army HQ, often from regiment of the Chief himself; only to enable the favoured officer earn the stamp of having served in Military Operations. Incidentally, the current Additional Director General (Special Forces) is from the Gorkha Rifles.

There may also be bright ideas in the pipeline to put the entire Army in one uniform; like the Navy, Air Force and Central Armed Police Forces (CAPF). This too would be retrograde. There is no need for copying uniformity of uniforms of China’s PLA. Officers wearing own regimental uniforms is good for morale of the Regiment; and consequently boosting the regimental bond for fighting units – a major factor in battle that should not be lost sight of. It does not mean that Brigadiers and above cannot be fair in dealing with their command/subordinates. But as mentioned above, this has to be practiced Chief downwards.

Additionally, Colonel of the Regiment (COR) has an important function and responsibility. There is talk of abolishing that appointment too; another example of making a change just for the sake of change. But can you have the COR wearing a different uniform?  Rather than changing uniforms of one-star officers and above, could the Chief prevail upon the government to forbid CAPF copying Army uniforms – which no other country permits? Are we comfortable with the spectacle of our columns carrying placard saying ‘ARMY’ when deployed for flag march in Haryana in face of the Jat agitation in March 2017?

The Prime Minister mentioning that despite different military uniforms we must work towards integration, may or may not have led to this decision of the Army. However, obsessed with uniforms, are changes warranted to make the organization and personnel more productive, financially  better off and socially adaptable; are we losing sight of higher and long term vision to take care of core interests of all ranks of the Army, restoring their erstwhile status of being the cream of the society?

3 thoughts on “Uniformity in Uniform”