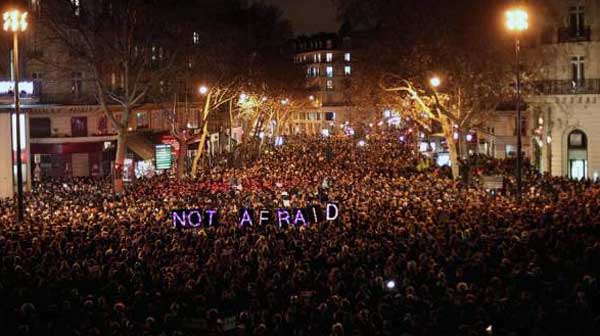 “Tout Est Pardonné” (All is Forgiven) – Charlie Hebdo issue no 1178

7th January 2015 was not just like everyday day for France. Around 11.30 AM (CET), gunshots were heard within the calm air in Paris. At 10 AM, Rue Nicolas-Appert, Chérif and Saïd Kouachi forced their way inside the headquarters of satirical magazine Charlie Hebdo. By the time they fled, they had already killed 11 people, including the magazine’s editor-in-chief, Stéphane Charbonnier. Shortly after their spree, they killed Ahmed Merabet, a Muslim police officer.

These attacks were planned to take “revenge in the name” of Mohammed, whose cartoons have been featured many times in Charlie Hebdo.

The day had not yet ended in France. On the same day elsewhere in Paris, Amedy Coulibaly shot a jogger in the nearby park. Although the jogger was incapacitated but breathing, the next day Coulibaly shot and killed a municipal police officer. On January 9th, Coulibaly entered a supermarket in Paris. He killed four people and took several people hostage.

As the day fell, both Coulibaly and the Kouachi brothers were killed during an intense fighting with armed police personnel’s. They left 17 people dead and 22 injured. These were one of the deadliest attacks on France since 1961, shocking the global nations.

All the three assailants were linked to terrorist organizations. A video was found with Coulibaly in which he pledged allegiance to the Islamic State of Syria and the Levant (ISIL). Many European nations including France have joined the international coalition which began striking ISIL militants. However, Al Qaeda’s Arabian Peninsula wing took responsibility for the attacks.

These attacks were planned to take “revenge in the name” of Mohammed, whose cartoons have been featured many times in Charlie Hebdo. Charlie Hebdo was infamous for its offensive materials, which were designed to mock many political figures and religions. The newspaper head office has been previously molotoved, and many of its comics have faced law suits and protests.

To understand the root cause, we need to dig deep. So what it is that drives these men insane? What makes them pick weapons on their shoulders and blood on their hands? Who tells them to take innocent lives? Well, the answer is simple, the root cause is radicalisation.

Coulibaly attack was an act of revenge against the coalition actions on ISIL. The international coalition has carried out numerous airstrikes, killing thousands of ISIL fighters. Additionally, many EU nations have equipped Kurds with sophisticated arms and ammunition that has strengthen the fight against ISIL fighters.

To understand the root cause, we need to dig deep. So what it is that drives these men insane? What makes them pick weapons on their shoulders and blood on their hands? Who tells them to take innocent lives? Well, the answer is simple, the root cause is radicalisation. What makes people, born in other nations, live their whole life in western nations and join ISIL? “There is a growing feeling in Europe”, echoed by former UK Prime Minister David Cameron, “and multiculturalism is to blame”, he said. Internal governance policies such as secularism are viewed as a way out of liberalism, but it also activate left, more violent groups and radicalise them. Even after long, generations that have arrived in EU nations feel morally “detached” from their own ideology and general culture.

Terrorism will always find a way to EU, even if member nations and their coalition eliminate ISIL. This brings our focus on prevention, stopping attacks before it claims more innocent lives in EU. To prevent a terrorist attack, we first need to focus on two main areas:

1. Preventing radicals from entering EU and

2. Preventing attacks well before they are carried out.

As thousands have left their homes to take part in the Syrian conflict, their nations were left, entangled with ISIL. The problem is quite large; however the problem intensifies when these fighters return from their “jihad”. After receiving combat trainings, extensive trainings in explosives and a radicalised mindset, these “jihadist veterans” find a way back to their home. Look at Kouachi, for example, he learned how to fight in Yemen. Though he was monitored by the French police, but by January 2015, French law enforcement agencies stopped considering him and his brother “prominent threats”.

…not every “potential terrorist” in EU has ties with terrorist organizations abroad. Connections tend to appear over internet, where people expose themselves knowingly or unknowingly to hate filled messages and ideology.

Some might therefore suggest that the EU take a more controlling stance on border security, to minimize the ability of radicalized fighters to return to the EU. The free movement of citizens within the EU is one of the EU’s “fundamental rights,”12 guaranteed by the Schengen agreement.

Instances like these make EU nations vulnerable from within. Another issue that makes law enforcement tasks even more difficult is the “Schengen agreement” which prohibits tracking foreigners coming to EU nations, giving a chance to escape especially for “person of interests”; even if a citizen is identified, it is difficult to keep a track on him as inter agencies coordination takes a lot of time to respond especially when there is jurisdiction issues. I have seen (during my time in EU) law enforcement agencies don’t go along with each other over international cases.

However, not every “potential terrorist” in EU has ties with terrorist organizations abroad. Connections tend to appear over internet, where people expose themselves knowingly or unknowingly to hate filled messages and ideology. Shocked by the Paris Shootings, UK Prime Minister David Cameroon had an extensive meeting with law enforcement agencies and discussed his plans to give extensive power on internet monitoring. Days after incident, President François Hollande called internet service providers to shut down anti Semitic websites when a survey reported that these anti Semitic websites attracted more youths than networking websites like Facebook.

Preventing an attack is just a “first step” of a larger picture. The objective will be complete when “root” cause of the issue is eliminated which will prevent EU residents from being radicalised.

No matter how much modernise you do to your border security, it will never be enough. Terrorists will always find a way to enter EU, thus making law enforcement agencies and their intelligence reports critical before an attack. Barely a week after Charlie Hebdo attack, Belgian officials were able to identify and raid a terror cell. Two suspects were killed and a terror threat was averted before it could be implemented. Intelligence reports here proved to be vital.18 though this is normally the mandate of national police forces to handle; the EU may play a role in facilitating communication between various member states. The Belgian terror cell was partially identified due to the arrest of an arms dealer linked to terrorist Coulibaly, although similar connections were found between other suspect terrorists. Just as extremism is a multinational issue, so too must be the EU’s response.

Preventing an attack is just a “first step” of a larger picture. The objective will be complete when “root” cause of the issue is eliminated which will prevent EU residents from being radicalised. Although in this segment assimilation is not required, EU and the governance is weak too, thus it is their responsibility to ensure EU residents feel “equal”. Civic integration as clearly failed, but a successful policy is a key to eliminate “radicalisation”, therefore terrorism.

To properly address radicalization, focus must be placed not only on immigrants or citizens prone to radicalization but the factors that push them there. Perhaps the most important of these are racism and xenophobia. In a self-perpetuating cycle, these terrorist attacks can lead to islamophobia, which causes further alienation of Muslims within a country. Political parties such as the UK Independence Party or the French National Front pose anti immigrant policies that may increase the chances immigrants veer towards radicalization.

With ISIL gaining recognition even as the international coalition against it grows in strength, the threat of terrorism will not be diminished without decisive and intelligent action.

In the name of civil liberties, increasing security is not an option. I think strengthening border security and creating a passenger name records database, will assist a lot of EU member nations. Although this proposal was blocked in the European parliament as many considered it violation of “individual privacy and UN Rights”. Although it was just one proposal, there are many that have been rejected previously. It is important to understand that you cannot protect and defend a nation reciting “human rights para from the UN charter”; strengthening internal security will defend you from jihadist forces.

The Charlie Hebdo attack will remain on the mind of France and the entire EU for years to come. With ISIL gaining recognition even as the international coalition against it grows in strength, the threat of terrorism will not be diminished without decisive and intelligent action. However, the threat of terrorism must not distract decision makers from the EU’s core values. No matter what happens, it is clear that “tout est pardonné” (All is Forgiven) is not quite true; the EU will never be able to continue in the same way, as it would after January 7th.