UN can only address terror, not proxy war 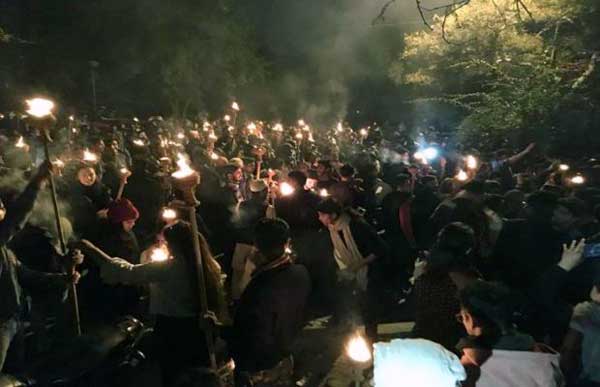 The fire of proxy war ignited by Pakistan had to be extinguished. The difficulty was in determining the method. Pakistan was absolutely convinced that such is the fear of its nuclear weapons on India, and such is its strategic partnership with China that India has no option but to bear Pathankot and Pulwama. With the passage of time, Pakistan’s proxy war was getting increasingly audacious and the Pak proxies within India had accordingly underestimated their own country in defeating Pakistan’s proxy war.

It is for this reason that Mehbooba Mufti had the gumption of wielding Pakistan’s tongue and Abdullah – father-son duo, inflicted India with anti-national statements. They threatened to set India on fire, if Article-370 or Article-35A or both were to be removed.

Pakistan and its proxies reckoned that following Pulwama – the current dispensation would be destroyed as the majority community will be convinced that the present leadership is all bluster and actually has no answer to proxy wars. In turn, it will bolster the anti-national agenda and activities of a segment of the minority community.

26/11 was invited before 2009 elections to discredit the majority community as terrorist, and to balance ‘Jihadi Terror’and so called ‘Hindu Terror’. ‘Pulwama’ was invited before 2019 elections to discredit the country’s leadership and demoralize the majority community. Proxy war in India had reached a stage, when it was difficult to discern as to where Pak sponsored proxy war ended and politics began. Both became inextricably intertwined.

Balakot put paid to their plans of ensuring the return of the present dispensation through the jihadist-Maoist route, with the help of their benefactors Pakistan and China respectively.

If we had not done ‘Balakot’, the country would have been grievously damaged, in the sense that Pakistan’s influence over Indian democracy would have crossed the danger mark. The proxies of Pakistan and China are in disarray after Balakot. They are struggling to find direction. Most of them poured into Begusarai in support of ‘tukre-tukre’ poster boy in desperation. They are still deciding on their future course. Balakot put paid to their plans of ensuring the return of the present dispensation through the jihadist-Maoist route, with the help of their benefactors Pakistan and China respectively.

Balakot not only took the wind out of jihadis, it also dealt a massive blow to the Maoists. It may be underscored that the jihadi-Maoist partnership was painstakingly and assiduously forged by the benefactors of the proxies of Pakistan and China. It is then the ‘tukre-tukre’ forces came into being.

The UN sanctions on Masood Azhar and the Chinese inability to stave off the resolution made the ‘trukre-tukre’ forces despondent. They could never imagine that Pakistan’s all weather friend, China, could be brow-beaten diplomatically by the powers that be at India’s behest.

While Balakot demonstrated India’s new resolve and mood in counter proxy war, it had the effect of shrinking China’s diplomatic maneuver space. Balakot surely is not the first and last counter proxy war strike against the jihadis in Pakistan. Sooner or later, following such strikes, China had to take position on Pak sponsored jihadi tanzims.

Love for JeMjihadis and hate for Uighur militants was becoming unsustainable for China. Support for JeM and restrictions on Uighur Muslims could not be reconciled. Support for Masood Azhar and restrictions on beards, burqas and namaz in Xinjiang was duplicitous, difficult to defend internationally. There is every danger of the embrace of jihadi fire in Pakistan and China. Masood Azhar definitely would not have sat in China’s lap indefinitely. The loyalty of global jihadi organizations like the JeM is opportunistic and fluid. The JeM invited Indian strike in Balakot, which is at the edge of Gilgit-Baltistan, the infant segment of CPEC. This must have surely weighed on China.

In the UN Resolution, there was not even a mention of Pulwama. The major case against Masood Azhar was his links with Al Qaeda. This was a realty the Chinese had to accept. Further the jihadi massacre in Sri Lanka wherein 253 people were killed and more than 500 injured, cast the exigency and emergency of the UN Resolution. There was no scope for China to wriggle out this time.

When India became proactive with Balakot, Pakistan became reactive, and China inactive, since it was floundering for response. The international community responded favourably because the message was very clear that India would pursue the Balakot pattern in counter-proxy war, with or without the international community. This is the way the world works and this is the reward for being proactive.

The sanctions on Masood Azhar have not only impacted Pakistan and China, but their constituencies in India as well. For now, their backs are broken. This includes the Kashmiri jihadis, comprising Mehbooba Abdullahas and separatists. There would definitely be a rethinking in these constituencies about the wisdom of adopting and opting for the parentage of Pakistan and China. It should now be clear to this constituency that while they are being consumed by the jihadi fire, China marches ahead economically nonchalant.

The day may arrive, when jihadi Islam may have to fight its decisive war against China.

It was Naeem Akhtar, Mehbooba’s PWD minister, who in an interview had said that the principal factor in Kashmir was China and JeM is its adopted child. India needs to be mindful of this, as recently a lot of Chinese literature seized in the Kashmir Valley indicate in that direction.

The JeM was Pak military’s strategic arm; therefore the Chinese till now ensured that it does not come under any harm internationally. For China in fact, JeM was an imperative to keep India destabilize so that the Indian state does not raise the issue of CPEC passing through disputed territory in POK, beyond a certain decibel level. There was also a deal that Pakistan will not allow the issue of treatment of Uighur Muslims in China to be discussed in the OIC and in turn China will support Pakistan on the issue of JeM at the UN.

The intended message was that despite the UN sanctions on Masood Azhar, the Maoists and the Jihadists are neither down nor out.

While we have addressed the jihadi facets of the ‘tukre-tukre’ forces, its Maoist component remains unaddressed. This component is not amenable to a Balakot strike or the UN. The two facets have fed on each other. Following the withdrawal of Soviet forces from Afghanistan in end of 80s, the global jihadis were invited by the Kashmiri leadership within the Valley. The global jihadi threat became so overwhelming for the security planners that they were totally inattentive to the spread of Maoism in the country. The irony was that Maoism a variant of Communism, was the ideology that was defeated in the battlefields of Afghanistan. The concert between the two in the Indian context cannot be missed.

…the tukre-tukre forces, a combination of jihadi and Maoist facets, within the country need to be ruthlessly crushed.

The recent killing of a BJP MLA in Chhattisgarh, BhimaMandvi; the assassination of Congressmen, Mahendra Karma and VC Shukla, in the Darba massacre in 2013; the poll boycott call of Maoists in Malkangiri in Odisa and in Gadchiroli in Maharashtra is a direct challenge to the Indian democracy. The ‘Tukre-Tukre’ forces want to derail democracy as precursor to splintering their motherland.

For the integrity of India, it is therefore not enough to address the jihadi facet of proxy war, the Maoist facet which has sustained an environment of terror in the red-corridor for so many years now also needs to be destroyed. Even more importantly, the tukre-tukre forces, a combination of jihadi and Maoist facets, within the country need to be ruthlessly crushed. This force, more than armed cadres, comprises white collar terrorists, i.e. lawyers, professors, activists, so-called intellectuals, so-called artists etc.