Further, such a large influx of outsiders also affected the economy of Assam and created chronic problems of unemployment and under-employment. Ecology too was affected. The Bangladeshis and Nepalese  settled in the prohibited lands near the forests, disturbing the ecological balance. Besides, the indigenous people have become a minority in a number of places thereby changing demography and social structure. These changes gave rise to resentment and frustration among the  indigenous people.

Shrinking landmass and continuous influx of outsiders affected social and political life in Assam. The indigenous people of Assam felt that they may be reduced to a minority and thus lose their say in the governance of Assam.

The official response to these concerns of the people was indifferent and mute. The ‘Immigration Expulsion Act’ of 1950 was not implemented and in 1957 it was repealed. The ‘Passport Act’ of 1951 was also not put into effect. Truly speaking, the immigrants were serving as ‘vote banks’ of some political masters and as such the post-independence election arithmetic of some political parties encouraged this.

In fact, the foreigner’s issue has been misunderstood. Deliberately or otherwise, some vested interests have interpreted it as a movement to drive out non-Assamese Indians. The reality is exactly the opposite. The demands of the movement had been only to drive out Bangladesh and Nepalese. The movement leaders had spelt out that the issue of citizenship of foreigner could be decided on the basis of National Register of Citizen of 1931 or the Voters List of 1952. But this point has been deliberately ignored by concerned authorities. Such colossal neglect and indifference was bound to agitate the public mind.

In March 1979, a by-election was to be held in the Mangaldoi constituency of Darrang district. When the voter’s list was updated, out of six lakh names, objections were raised against 70,000 names, allegedly foreigners. On the direction of the Chief Election Commissioner, a tribunal was set up, which declared 45,000 as foreigners. The magnitude of the presence of foreigners in one constituency at such a large scale shocked the people of Assam.

This gave birth to the Assam agitation, which was spearheaded by “All Assam Gana Sangram Parishad” (AAGSP), formed on 27 August 1979. AAGSP was essentially a political mouthpiece of All Assam Students Union (AASU). It soon spread its tentacles all over Assam, particularly in the Brahmaputra Valley. This led to a series of statewide demonstrations, blockades and agitations which disturbed normal life in Assam.  It ended with the signing of the Assam Accord in 1985.

At about the time when AASU launched the political movement on foreigners’ issue, some student leaders did not see any wisdom in these political movements. Four of them, i.e. Rajiv Raj Kanwar alias Arbindo Raj Khowa, Anup Chetia Golap alias Barua, Samiram Gohain Alias Pardeep Gogoi and Paresh Barua (not really a student leader but a railway employee thrown out of service for forgery and fraud) met at Rangghar near Sibsagar on 07 April 1979 and floated an organization called “United Liberation Front of Assam” or ULFA. Today, only Arbindo Raj Khowa and Paresh Barua are with the organization. The other two have surrendered or have been arrested. The aim of this organization was to liberate Assam and the people of the state from the so-called machinations of Indian colonial rule. They decided to do so by an armed uprising. Thus the seeds of militancy in Assam were sown. 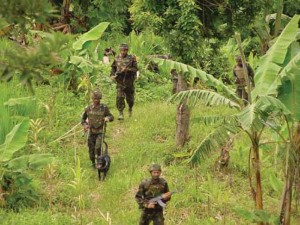 Discontentment of the indigenous people of Assam about the foreigner’s issue in general and the movement launched by AASU, in particular, provided valuable opportunity to ULFA to spread its wings. The AASU movement had paralyzed the state administration and brought all political activities to a standstill. In 1977, like the rest of India, Congress had been thrown out of power and it had only eight members in the state legislature. The non-Congress government could not last long. On 12 December 1979, President’s Rule was imposed in Assam to check the lawlessness created by the AASU movement. However, when the President’s Rule was withdrawn in 1980, some 43 legislatures defected to Congress and its government was installed with Mrs Anwara Taimur as the Chief Minister.

This further alienated the people and it became a plank for the ASSU and AAGSP to expose the machinations of the central government at Delhi.  Thus, Assam agitation on foreigners’ issue turned violent, which gave a fillip to the ULFA cause. By the time Assam Accord was signed in August 1985, ULFA had become a household name in 15 districts of upper and lower Assam.

Strategic short-sightedness and lack of comprehension of the problem at the national level allowed ULFA to consolidate its position through the decade of the ‘eighties’.  And its ‘Godzilla’ like rise was only realized in November 1990 when ‘Operation Bajrang’ was launched by the Army.

It was only then it became evident that ULFA was not only a very well-knit organization but it possessed a very sharp and intelligent leadership, along with a large crop of trained and committed activists.  Besides, the organization had amassed huge funds at its disposal through coercion and extortions, which were used to pay for the training of its activists and acquiring sophisticated weapons.

Nature of ULFA Militancy and its Strategy

Very often, the nature of ULFA militancy has been misunderstood because of the passivity of activists in the wake of ‘Operation Bajrang’ and ‘Operation Rhino’.  In certain quarters a view prevails that ULFA militants were not as aggressive and violent as the militants of Punjab, J&K and Nagaland.

Geography and social stratagem of Assam disallow ULFA from pursuing a strategy of high voltage militancy.  This has always been the basic consideration for it to adopt a posture of controlled confrontation with the security forces so as to tire them out in a prolonged game of hide and seek.

This is a misplaced view.  The nature and type of ULFA militancy has to be seen in view of long drawn strategy of ULFA leadership and assessments of its strengths and weaknesses.  It must be noted that ULFA leadership never wanted to be so foolhardy as to openly challenge the security forces, as did perhaps the militant’s leader of Punjab, J&K and Nagaland, and wipe itself out in the bargain.  It is to the credit of its sharp intelligence and visionary intellect that ULFA leadership has been able to save itself twice from a total collapse under the weight of two well launched Army Operations, i.e. ‘Operation Bajrang’ and ‘Operation Rhino’.  Each time it salvaged itself with great cunning and shrewd strategy.  In fact ‘Operation Rhino’ had almost wiped it out, but then it acted in most clever manner to get the Army off its back.

Therefore ULFA militancy needs to be examined in its unfathomed capacity to survive and sustain itself against all odds unlike a foolhardy organization of militants elsewhere who commit ‘Hara-kiri’ when they involve themselves in direct confrontation with security forces. Lessons of history of successful insurgencies are very clear.  Che Gauvera, an authority on conducting successful insurgency in Cuba, talks about seven sins of insurgents.  And vanity, according to him, is the most serious sin.  More often than not, insurgency fails because of the vanity of its leadership. This is a trait that the ULFA leadership in 90-92 did not suffer from. It is this aspect of ULFA militancy which needs to be seriously attended.

To dismiss it as an organization of city bred youth, fond of soft living, incapable of leading hard-rugged life and  lacking in physical courage would only tantamount to serve the aim and purpose of the ULFA leadership.  It has been my experience that whatever they may lack in physical prowess and physical courage they more than make it up by their sharp intellect, mental agility and fox-like shrewdness.

Undoubtedly the ULFA has been successful in waging a protracted war.  The cornerstone of ULFA strategy had been to ’save-itself-today-to-fight-it-big-another-day’. And it had successfully executed this strategy every time it learnt its lessons and got reorganized and regrouped into a more vibrant and  flexible organization.  Having lied low for four years since May 1992, it again began to exert itself in June 1996.  As one gleans through news items in the news papers, it is becoming evident that ULFA has modified its strategy from total passivity to controlled aggression. This is a sure indication of a violent phase of militancy in Assam. But given the intellect and the intelligence its leadership has, it will not be foolhardy to engage itself in a total military confrontation with the Army.  Should it do so, it will meet the same fate as the Punjab and J&K militants.

One thought on “ULFA’s niche war”