ULFA The Hindu Mercenaries of Jihadis

In 13 different incidents reported since January 5, 2007 from the districts of Tinsukia, Dibrugarh, Sivasagar and Dhemaji, the United Liberation Front of Asom (ULFA) is reported to have mowed down in cold blood about 60 poor workers from Bihar who had gone to Assam to earn their living as milk vendors, workers in brick-kilns etc. These workers–all Hindi speakers–were allegedly separated from Assamese speaking workers living in the same area and were shot dead at point blank range with hand-held weapons.

This is not the first time that the ULFA had indulged in such brutal tactics to intimidate people from other parts of India living in Assam and force them to leave. It had done so in 2000 and 2003 mowing down about 150 Hindi-speaking poor workers from Bihar and Uttar Pradesh.

Since the ULFA resumed its acts of terrorism in September last year after the collapse of the peace talks, it had stepped up its use of improvised explosive devices (IEDs). The media in other parts of India failed to highlight the fact”¦

The leaders of the ULFA are all Hindus, but speaking the Assamese language. It often tends to be forgotten that in the 1980s they started their movement mainly to drive out the millions of illegal Muslim migrants from Bangladesh. As they became dependent on the intelligence agencies of Bangladesh and Pakistan for money, training, arms and sanctuaries, these agencies intelligently manipulated them to give up their campaign against the illegal Muslim migrants from Bangladesh and turn it instead against the Hindus from other parts of India, who had settled down in Assam in order to earn their living. Many of the Hindu leaders of the ULFA, who enjoy the hospitality of the Bangladeshi intelligence in Bangladeshi territory, have reportedly Muslim mistresses provided to them by the Bangladeshi intelligence.

They have now become pure Hindu mercenaries, who are letting themselves be used by the intelligence agencies of two Muslim countries, who are India’s ill-wishers—Bangladesh and Pakistan— in order to fulfill their agenda of making Hindus kill Hindus for no other reason than that they speak different languages and come from different parts of India. The extent to which they have come under the influence of the Bangladeshi intelligence would be evident from the fact that while they target Hindus from other parts of India, force them to pay taxes and kill them, they never target the Bengali-speaking Muslims from Bangladesh.

In an editorial on November 9, 2006 the “Sentinel”, a daily newspaper published from Guwahati, wrote as follows while commenting on the targeting of Hindi-speaking civilians from other parts of India living and working in Assam: “ Striking terror in the hearts of Hindi-speaking people of Asom is precisely what the jihadi elements of Bangladesh and the ISI (Pakistan’s Inter-Services Intelligence) want for two reasons. In the first place, their identification with India is stronger than many others disillusioned by the Centre’s neglect of Asom. Secondly, the Hindi-speaking people control the economy of Asom both as businessmen and as skilled manual workers. The forces inimical to the State want the economic vacuum that has stoked the illegal influx from Bangladesh to be intensified.  However, none of this is unexpected. For over two decades, the “Sentinel” has constantly harped on the fact that it does not take long for a silent, unarmed invasion (My comment: of illegal immigrants from Bangladesh) to turn into a violent armed invasion. We are beginning to see this happening. Over the years,  the Asom Government and the Centre chose to pay no attention. They are now about to reap as they have sown.”

I wrote in my previous article cited above: “Many non-governmental organisations have refrained from condemning the ULFA’s targeted killings of innocent civilians. Instead, the focus of their campaign has been against the Security Forces. After the two explosions in Guwahati on November 5, 2006 these NGOs remained conspicuously silent on the brutal killing of the civilians, but instead blamed the Government and the security forces for calling off the cessation of operations against the ULFA on September 23, 2006. The cessation had been announced on August 13, 2006 to facilitate peace talks with the ULFA. Since there were indications that the ULFA was exploiting this cessation to step up its fund collection drive through extortions and other activities and did not respond seriously to the Government’s offer of peace talks, the cessation was called off.  Some of these NGOs had organised a public meeting at Jorhat on November 7, 2006 under the auspices of the People’s Committee for Peace Initiatives in Asom.  At this meeting, there was hardly any criticism of the brutal murder of the civilians by the ULFA on November 5. 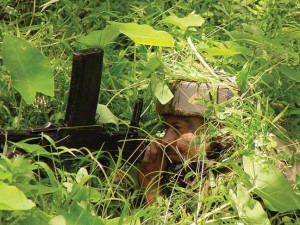 Instead, allegations were made that the security forces were committing atrocities against the civilians. Some of the points made by the Hindi-speaking residents of Assam in their letters to the local newspapers are disturbing.  One such letter published by the “Assam Tribune” on November 7, 2006 said: “Some people (in the PCG) even acted as coordinators in the ULFA diktat that all “Indians” living in Asom must pay tax, an euphemism for extortion. But the same ULFA never utters a word about the millions of Bangladeshis illegally living in Asom for the fear of displeasing their foreign masters. In other words, “Indians” living in Asom must pay “tax” or face bullets, but Bangladeshis can stay without any such fear.” (Citation ends) PCG stands for People’s Consultative Group, a front organisation of the ULFA.

Since the ULFA resumed its acts of terrorism in September last year after the collapse of the peace talks, it had stepped up its use of improvised explosive devices (IEDs). The media in other parts of India failed to highlight the fact that many of these IEDs were planted in areas where Hindi-speaking people live in order to create panic among them. The  December 2006 issue of “Swadhinata” (Freedom), an electronic newsletter of the ULFA, had alleged  that “outsiders” had set up “mini Bihars”, “mini Rajasthans” and “mini Bengals” in different Districts of Assam, and called for their ouster.

The present campaign against the poor migrants from Bihar has come in the wake of this. The lack of a will–in Guwahati as well as in New Delhi–to act firmly against the ULFA and its sponsors in Bangladesh is creating an extremely dangerous situation in Assam.