UCAV: Airborne Without a Pilot 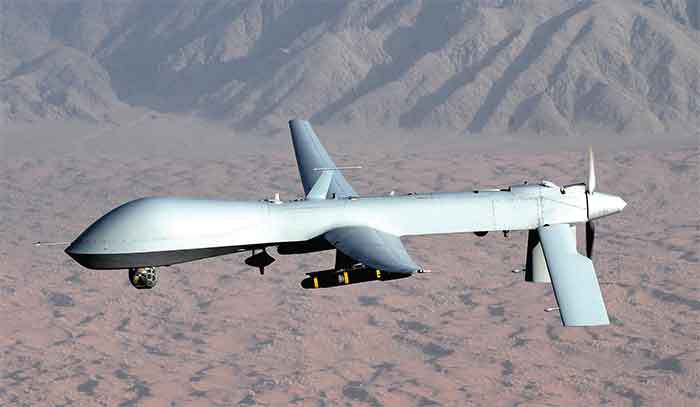 It seems likely that UCAVs will supplement manned aviation in a growing number of operational situations. The main reason is the capability UCAVs offer to mount a lethal attack without endangering the lives of service personnel. In an era of shrinking defence budgets, cost-conscious governments are more likely to approve the acquisition of three or four squadrons of armed drones instead of one squadron of manned combat aircraft. In some cases, weather restrictions and the physiological limitations of human pilots could also make UCAVs more viable than manned aircraft.

The strange aircraft approaches the target system stealthily, selects the most significant one, and then strikes with unerring accuracy and devastating effect before speeding away. Yet, should the machine be shot down, the pilot’s life is never at risk. In fact, the ‘pilot’ may not even be a trained aviator and may be located thousands of kilometres away. Is it any wonder that Unmanned Combat Air Vehicles (UCAVs) are rapidly becoming the weapons of choice for military forces worldwide? Despite savage cuts in the defence budget of many countries, the UCAV market continues to grow at a healthy pace.

Unmanned Air Vehicles (UAVs), popularly known as drones, have already proved their worth in the Intelligence, Surveillance and Reconnaissance (ISR) role. Since Israel made drones a household word as far back as the Yom Kippur War of 1973, they have become a cherished asset of many nations. But there’s a crucial time lag while the attacking force goes through the operational cycle of unarmed UAV employment – gathering and transmitting actionable intelligence, relaying it to a command post, launching a manned air strike and ultimately, executing the attack. By the time the attacking aircraft reaches the reported location the target itself may have moved. 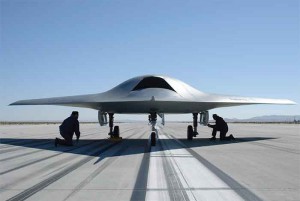 Such delays can be eliminated by UCAVs that are able to locate, track and kill a target in real time, from the same platform, all without a pilot onboard. UCAVs also offer greater range, manoeuvrability and payload capacity than manned strike aircraft because they can dispense with life-support systems, flight controls, ejection seat, even the cockpit. On the flipside, the response time of a UCAV’s flying control surfaces is much longer than that of a manned aircraft due to the distance between the operator and the airborne machine. At present, UCAVs are remotely piloted by a person who is generally on the ground. Alternatively, the operator could be located on an airborne aircraft in the vicinity. In the near future, UCAVs will also be capable of fully autonomous missions with pre-programmed routes and target details, decision making ability, and adequate means of defence against air and ground opposition. Are the days of the combat pilot numbered?

Unmanned Air Vehicles (UAVs) have already proved their worth in the Intelligence, Surveillance and Reconnaissance (ISR) role…

The United States has been in the forefront of the emerging UCAV revolution for over a decade. In 2005, the total fleet of UAVs deployed by the US constituted just one in twenty military aircraft, but the figure has now soared to one in three. It is still rising. The US Air Force (USAF) reportedly trains more pilots for advanced UAVs than for any other single weapons system. Given the pace at which UCAVs are surging ahead, some believe that the troubled and prohibitively expensive Lockheed Martin F-35 Lightning II fifth generation fighter may be the last manned strike aircraft the West will build.

America regards UCAVs as vital to its operations in Afghanistan and Pakistan and many dreaded terrorists across the region owe their premature exits to lethal robotic attacks. According to a report by the New America Foundation, in 2012 alone, US forces killed between 222 and 349 ‘militants’ in the course of 48 UCAV attacks in Pakistan. It also states that since the US drone campaign in Pakistan began in 2004, 84-85 per cent of those killed were reported to be militants, just six to eight per cent civilians, and seven to nine per cent remained ‘unknown’. Observers on the ground dispute these figures, insisting that many more innocent bystanders than terrorists get killed. However, given the spectacular results of drone strikes, it is understandable that the US government consistently stonewalls Pakistan’s shrill demands to end them. 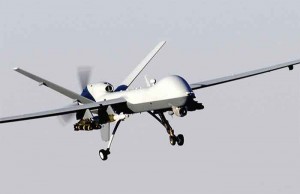 The General Atomics MQ-1 Predator, the best-known of all UCAVs, initially carried only cameras and other sensors for reconnaissance and observation roles. It was later upgraded with AGM-114 Hellfire air-to-surface missiles and other munitions and has seen combat in Afghanistan, Pakistan, Bosnia, Serbia, Iraq, Yemen, Libya and Somalia.

The General Atomics MQ-9 Reaper is a larger and more capable version of the Predator and can be controlled by the same ground systems and satellite data-link used for the MQ-1. It is a multi-mission, medium-altitude, long-endurance UCAV, employed primarily in a hunter/killer role against dynamic targets. It has significant loiter time albeit less than the MQ-1, wide-range sensors and a multi-mode communications suite. It can carry precision weapons such as the GBU-12 Paveway II laser-guided bombs, Joint Direct Attack Munitions (JDAM), GBU-39 Small Diameter Bombs (SDB) and AGM-114 Hellfire missiles. The Reaper’s 950 hp (712 kW) turboprop engine is far more powerful than the Predator’s 115 hp (86 kW) piston engine. This permits it to carry 15 times more ordnance and cruise at thrice the speed of the MQ-1. Although it is remotely controlled, it also has a unique ability to autonomously execute the kill chain (find, fix, track, target, execute and assess) against high-value, fleeting, and time-sensitive targets. It can also be used simply to collect intelligence. The MQ-9 Reaper is expected to play a critical part in future USAF operations, even though it is considerably more expensive than the MQ-1 Predator. 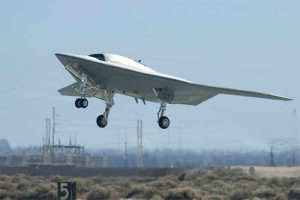 A number of other American UCAVs are under development including Boeing’s privately-funded X-45 Phantom Ray and the US Navy’s X-47. Both have the potential to replace manned fighters eventually. Northrop Grumman’s X-47B next-generation UCAV is a technology demonstrator that in May became the first autonomous, fixed-wing aircraft to achieve a catapult take off and touch-and-go landing on an aircraft carrier, the nuclear-powered USS George H.W Bush, without human control. The aircraft carrier has special computers that digitally transmit speed, cross-wind and other data to the X-47B as it approaches from miles away, and the drone relies on pinpoint GPS coordinates and its own advanced avionics to execute this technologically striking feat.

Unmanned and robotic attacks, however, raise a host of legal and ethical issues…

The X-47B has an unrefuelled range of 2,100 nautical miles and much more with autonomous aerial refuelling capability, that is due to be tested in 2014. It will be able to deliver laser-guided bombs and other Precision Guided Munitions (PGMs). It will undergo several shore-based capture landings before attempting its first true carrier landing this year.

At the other end of the scale, AeroVironment’s RQ-11B Raven is small enough to be mistaken for an aero-modelling toy. Weighing just two kilograms, it can fit into a soldier’s backpack, and is launched by hand. At present, it is used only for reconnaissance but may be modified to deliver a grenade-sized weapon from the air. AeroVironment’s Switchblade has a guidance system that enables it to loiter, lock on to, and follow a rapidly-moving target, even if the target is trying to evade its unwelcome attentions. It can then crash into the target with an explosive warhead. 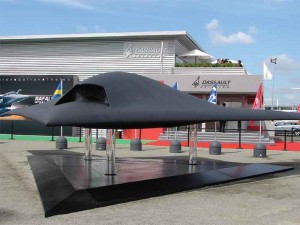 Europe, a late starter, now seems determined to catch up in the UCAV race. The Dassault nEUROn is Europe’s first stealthy combat drone and has completed over six years of design, development, and static testing. A tailless flying wing like the X-47B, it is being designed under an experimental programme involving France, Italy, Greece, Spain, Sweden and Switzerland. Its Turbomeca/Rolls Royce Adour Mk 951 engine is a non-reheated turbofan. The nEUROn demonstrator completed its first flight in December 2012 and its testing programme, extending over 100 sorties, is likely to last two years. Dassault plans to use data collected by the demonstrator to produce derived UCAVs that may feature payloads and ranges similar to those of manned combat planes, with autonomous air-to-ground attack capability. Sweden’s Saab Group, a partner in the nEUROn programme, may in the future also consider marketing an unmanned version of its JAS 39 Gripen E/F combat aircraft.

The British BAE Systems Taranis, which is approximately the same size as the Hawk Advanced Jet Trainer, is one of the world’s largest UCAVs. Taranis too is a technology demonstrator, intended to prove the viability of unmanned systems to attack ground targets. It is a semi-autonomous stealthy device designed to fly intercontinental missions at supersonic speeds. Controllable via satellite link from anywhere on Earth, it can be used for both long-range reconnaissance and to provide deep-strike capability in a hostile environment. It is powered by an Adour Mk 951 engine and will carry a variety of weapons enabling it to attack a range of air and ground targets. It will also be able to defend itself against manned and unmanned enemy aircraft, perhaps even engage in air combat. 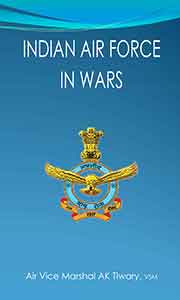 Already a decade into development, its first flight and further trials are scheduled this year at the Woomera testing facility in Southern Australia. Further in the future, with the possible incorporation of “full autonomy” Taranis will gain the ability practically to think for itself for a large part of the mission, thus making it one of the most advanced UCAVs available. If all goes well, by 2030, a third of the Royal Air Force (RAF) could be made up of UAVs and UCAVs. The French and UK governments have also signed a Memorandum of Understanding to promote collaboration on the development of a future UCAV that will combine the strengths of the nEUROn and the Taranis.