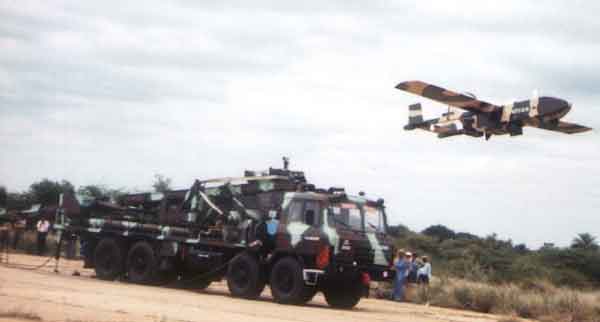 For counterinsurgency operations against the Maoist Naxalite rebels, UAVs have recently been used by security forces, mainly the Border Security Force (BSF) and Central Reserve Police Force (CRPF). They operate in tandem with the Mi-17 armored helicopters, allowing police to quickly deploy their forces to targeted areas identified by the drone. However, the Heron have shown to be limited in surveillance operations in the jungles of Chhatisgarh, Jharkhand and Bihar. During a recent operation conducted by the security forces, images taken by the Israeli drone on what was supposed to be a Maoist training camp ultimately proved misleading, as it was in reality only a village. The error was compounded by the fact that forces were dropped by mistake in the middle of a Naxalite zone, which the drone had not seen. The infrared optical radar SAR of the Heron is effective in clear weather, but struggles to pierce thick cloud cover or jungle foliage. The Netra, a portable drone weighing 1.5 kg on takeoff and vertical landing, is being developed in Ideaforge Technology Pvt Ltd and DRDO laboratories.

The DRDO is already working on Rustom H, a MALE comparable to the U.S. MQ-9 Reaper, which can fly for 24 hours. The Rustom UAV will gradually replace the Heron in service with the air force and navy.

The Border Security Force (BSF) and Central Reserve Police Force (CRPF) are interested in such a drone precisely for such missions. Featuring a high resolution camera, it will be able to operate for 30 min in a radius of 1.5 km.

The ADE is already has several UAVs, either in military service or about to be. With a battery life of 4 hours and a weight of 380 kg, the MALE Nishant UAV,is gradually entering into service with the Indian Army, where it will be used for targeting, reconnaissance, SIGINT and ELINT missions or battle assessment damage.

The Lakshya (“target” in Sanskrit) is a moving target of the Indian Air Force for missile firing training. Powered by the turbojet PTEA HAL-7, it can operate at speeds of 300km / h for up to 45 minutes. Around fifty Lakshya are on order. The successor, Lakshya II, will be able to simulate anti-ship and cruise missile attacks, flying at 700 km / h at very low altitude.

The ADE is also developing an unmanned solar powered drone capable of flying for 15 hours in succession, for which it is looking for foreign partnerships. It also has several projects for micro and mini UAVs, like the Slybird.

The main DRDO program is the Rustom MALE UAV, recently exhibited at the Singapore Airshow. With a 20 m wingspan, it can fly fifteen hours at 35,000 feet. The radar and optics should be of Israeli origin, as well as the engine, which can also be bought off-the-shelf from foreign suppliers. It has just completed its eighth flight in December, reaching an altitude of 6,000 feet. The DRDO is already working on Rustom H, a MALE comparable to the U.S. MQ-9 Reaper, which can fly for 24 hours. 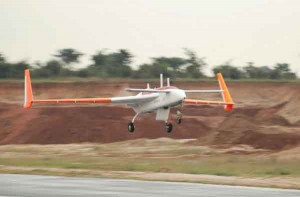 The Rustom UAV will gradually replace the Heron in service with the air force and navy.

In 2011, India announced that it wanted to develop combat drones (UCAVs), beginning by arming the future Rustom H (Rustom version C), then through the discrete stealth drone “AURA” project, for which the DRDO’s ADE estimates design time of seven years. Following the announcement of its selection of the Rafale fighter aircraft, several sources have indicated India’s interest in Dassault Aviation’s NEuron project. One reason could be that the DRDO is lacking in stealth and automatic takeoff-landing technologies. The future Indian UCAV will be configured in “flying wing”, which can operate up to 30,000 feet, and will be fitted with advanced avionics (IFF, radar fire control …).