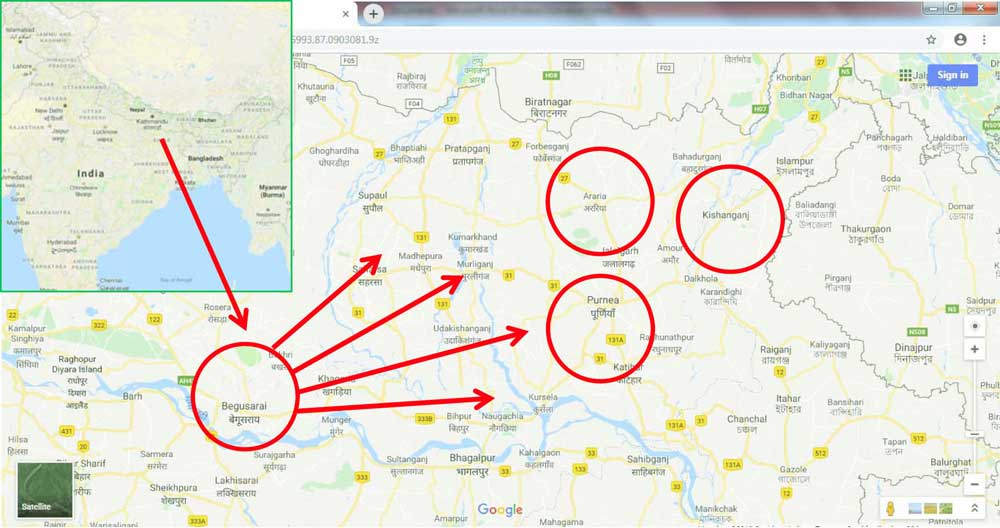 The Tukre-Tukre forces have travelled from JNU to Begusarai in Bihar, taking the electoral route to subvert and splinter India. The Tukre-Tukre enterprise is a mélange of anti-national forces, i.e. the jihadis, the Maoists and the Church. Both the jihadis and the Maoists ideologies do not believe in democracy, both revel in blood, and both are imported ideologies.

A BJP MLA, Bhima Mandvi, in Chhattisgarh has been killed by the Maoists. In fact, before every election there are such political killings by the Maoists. Earlier in May 2013, it may be reminded Mahindra Karma and VC Shukla, two Congress leaders were riddled with bullets by women Maoist cadres, who did the ‘dance of death’ around the slain corpses. Since Chhattisgarh, located on the tri-junction of Eastern Maharastra, Odisa and Telangana, is the epicenter of Maoism. These killings are done to influence elections. In the ongoing elections, there were at least 15 booths in Malkangiri district of Odisa, where not a vote was cast due to the fear of the Maoist. Malkangiri serves as the rear and recoup area. At another place in the same district, the poll party comprising 40 officials had to trek 20 kilometers through jungle because of the imminence of Maoist ambush. They trekked through unchartered routes by GPS and spent the night on a hill top under heavy rain. Yet they did not allow any harm to the EVMs. These are the kind of nationalist forces pitted against the ‘Tukre-Tukre Gang’.

Imported ideologies are dangerous because each country evolves in its own manner given its history, geography and religious mornings. India has an ageless civilization, buffeted by invaders and barbarians, yet the Indian civilizations has survived. India, therefore, certainly does not need ideologies, which are few decades old. India certainly does not deserve to be impacted by ideologies which are wasting themselves out on their way to extinction. Jihadism has come to be inflection point of suicide bombers and Maoism is a discredited ideology.

The man who scripted the JNU Tukre-Tukre show was one Iqbal Cheema, an ISI operative posted with Pakistani High Commission in New Delhi. The show was neither impromptu nor incidental. It was well planned and carefully crafted. The spot was strategically selected. As Iqbal Cheema brought the Maoist, Jihadi and Kashmiri separatists together in JNU, similar demonstrations were witnessed in Jadavpur University and Osmania University as well. These regional cores were also selected to effect the combination of the same anti-national forces. The combination of Jihadism and Maoism was then fanned from these centers. It was done to galvanize the anti-India elements across the country. The message that emanated from JNU acted as a catalyst for countrywide alliance. One major purpose of the JNU show was to propel Kanhiya to the status of a poster boy.

It is worthwhile to go into the genesis of the growth of jihadism and Maoism in India. 1979 was very significant year in human history. It was in this year that the Islamic Revolution in Iran took place. Khomeini tried to establish himself as the leader of not only Shiites but the entire Muslim world. He declared the Gulf Monarchies un-Islamic. He gave call for destruction of Israel. The Sunni monarchy of Saudi Arabia in order to neutralize Iran unleashed the most fundamentalist variety of Wahhabism within the country and outside. Since, there was an oil boom at that time, and petro-dollars were pouring in, there was no dearth of money to spread Wahhabism throughout the world. It was at this time that unprecedented number of Indian Muslims, especially from South India, found employment in the Gulf monarchies. The religious temper of that time in the Gulf was such that they ended up being radicalized even before the Pakistanis did.

Then in the same year, i.e. 1979, Soviet Union invaded Afghanistan. US-Saudi-Pak alliance created a jihadi force, which fought the Soviet forces for a decade in the battlefields of Afghanistan. The 10 year war was given the binary of Islam versus Communism. Islamic jihad defeated the communist forces and thus the Cold War came to an end. Unfortunately, however both the victor and vanquished forces, i.e. the jihadis and the Communists (Maoists)respectively began to play their murderous games on the body and soul of India.

Recently, one Kirti Dolpa, a tribal girl in the Abujmarh forest area of Chhattisgarh, which is also deemed by Maoists as ‘liberated zone’, setup a medicine shop, the first one in that Maoist controlled zone. Binayak Sen, who claimed himself Doctor, never thought of doing so because he is basically a Maoist backed by Church and the former Super Prime Minister.

When 26/11 conspiracy failed owing to Ajmal Kasab, the same political class then unleashed IshratJahan of LeT to eliminate MrModi and then came the bomb-blasts in October 2013 at Patna Gandhi Maidan. In respect of Batla House encounter, both Kejriwal and the said politician were seen in perfect alignment, one called it ‘fake’ and the other ‘shed copious tears’.

In 2014, some 23 NGOs of several hues, i.e. Maoists, jihadis or backed by Church swooped down on Varanasi in support of Mr Kejriwal and against Modi. Is it surprising that the same elements have now descended on a small district town of Begusarai in support of Kanhiya.

One top leader of a major regional party in Bihar confided to a senior journalist that he received hundreds of calls from US, UK, France, Norway, lawyers, judges, Bollywood — frantically urging not to field a candidate against Kanhiya.

The Kashmiri jihadis are also operating in favour of Kanhiya in Begusarai. It is another matter that no person from Begusarai can operate in the Kashmir Valley for similar purpose. He would be lynched and his dead body would be mutilated. The agenda is therefore not of ‘Azadi’ or ‘Kashmiriyat’, it is the destruction of India.

Why Begusarai? The ‘Tukre-Tukre gang’ has not electorally selected Begusarai only because there are strong communist pockets in the constituency. It has been chosen for strategic purposes because as we go eastwards from Begusarai, the percentage of Muslim population increases correspondingly. Estimates reveal that while the Muslim population in Begusarai is 18 percent, it increases to more than 40 percent in Purnea, becomes almost equal in Araria and swells to whooping 68 percent in Kishanganj. In our secular country, no non-Muslim can win from Kishanganj. Begusarai has a galvanizing effect on the alliance between the jihadis and the Maoists for the areas in eastern and north-eastern Bihar. They can then complement and supplement each other more effectively in their agenda of splintering India. Kishanganj is almost contiguous to Bangladesh. Compounded with radical elements in Bengal and Assam, the entire Siliguri Corridor becomes vulnerable. Accordingly the northeast, which is a success story of the government, becomes tenous in terms of linkage with rest of the country.

Gen Sinha warned the Home Ministry: “There is a tendency to view illegal migration into Assam as a regional matter affecting only people of Assam. It is more dangerous dimension of greatly undermining our national security, is ignored. Long cherished dream of greater East Pakistan / Bangladesh, making inroads into strategic land link of Assam with the rest of the country can lead to severing the entire landmass of the Northeast, with all its rich resources from the rest of the country.”

It is not just the jihadis, the Maoists and their political patrons who are active in Begusarai. The place is teeming with so-called actors, actresses, so called activists, script writers, Kashmiri separatists, academicians, and students. They are in Begusarai not for the love of Kanhiyabut in pursuance of their larger agenda of ‘Tukre-Tukre’ of India. The script writer, who along with his actress wife has acquired his riches from patriotic Indians, is now urging Muslim voters to vote and en bloc in support of Kanhiya. Maoism, Communism, jihadism and liberalism are very poor cover for sedition in India.

This author recently visited Begusarai to assess the mood and narrative in the elections. The narrative definitely is not predicated on local or regional issues, but on ‘national security’. The dominant thinking or apprehension amongst the majority voters is the safety and security of India. In that perspective, the elections in Begusarai is decisive for India because the ease with which ‘Tukre-Tukre Gang’ has travelled all the way from Delhi. The contest is between the ‘nationalist’ and ‘anti-national’ forces. The nationalist forces are pitted against the jihadi-Maoist combine. It is a contest between the nationalist forces and proxies of Pakistan and China. Balakot was the military facet of proxy war, and Begusarai is its political facet.