Space weapons are mostly perceived only as weapons which are used against satellites in space either from space or from ground. However, there is an additional category of weapons which could be deployed in space for the purposes attacks on the targets on the ground. Since 1980s a concept is being floated called the “rods from god.” If the technical and political hurdles for the development and deployment of such weapons could be overcome, then they could make militaries capable enough to destroy underground, hardened nuclear facilities.

Such weapon systems are perceived to consist of tandem satellites, one serving as a communications platform, the other carrying an indeterminate number of tungsten rods, each up to 20 feet in length and 1 foot in diameter. Such rods could be dropped on a target within 15 minutes notice from the earth control center. These roads would enter the earth’s atmosphere at an approximate speed of 36,000 feet per second. Upon impact, the rods would produce similar effects of an earth-penetrating nuclear weapon, without any radioactive fallout. This type of weapon relies only on kinetic energy to generate significant destructive force10.

In regard to ground based jammers some progress towards using lasers for the purposes of satellite jamming has already been done by China. As per reports they have used ground based lasers to target the US reconnaissance satellites. During August and September of 2006, China has used high-powered, ground-based lasers to blind the US reconnaissance satellites when they pass over China11. Here the purpose was not to destroy the US satellites but to make them useless over Chinese territory. It has also been reported that the US military was so alarmed by this Chinese activity that it has begun to carry out test attacks against its own satellites to determine the dimensions of this threat12. 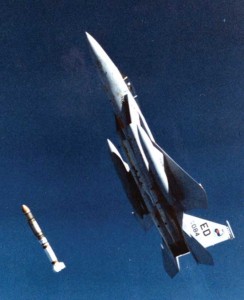 The concerns in regard to security of space assets and control of space have been raised in some form or other since late 1950s. The US scientific community had opposed the idea of putting the overall space programme in the hands of military way during 195813. During those days the idea of space warfare had not developed but still the fear was there in the minds of civilian community that their own military may play a role of a spoiler for civilian space programme. Subsequently, apart for the erstwhile USSR few other states entered the space field and also the proliferation of missile technology took place. During last four to five decades the dependence of the US military on space assets has increased substantially. The number of space faring nations has also increased.

Throughout 1970s and 1980s the US had major concerns revolving around erstwhile USSR. During March 1983 the then US President Ronald Reagan had proposed the concept of Strategic Defence Initiative (SDI/Star Wars)-about the usage of ground based and space based systems to provide protection against any attack by strategic nuclear ballistic missiles. The successive US governments were not able to take the idea further because of technological un-viability of the concept. Today, having achieved few technological breakthroughs this idea is being projected under a new name called ‘Missile Defence Shield’. All these concepts demand engagement of the missile in the outer space.

Probably, that is one of the reasons why the US withdrew from the Anti-Ballistic Missile Treaty (ABM) with Russia in 2002. This treaty was signed between the US and erstwhile USSR during 1972. The withdrawal from this treaty may allow the US to test and build the Missile Defence System. Today, states like the US are essentially not allowing any international treaty on banning the usage of space weapons because of their relevance for any Missile Defence system.

There is one school of thought which feels that because of the collapse of the Berlin Wall the context of the space weaponization debate has changed radically. Deprived of the monolithic Soviet bogeyman, pro-weaponizers needed a new threat to prod their audience into action—so they more or less created one14. However, this argument is not entirely true. This is because even after the Cold War security threats still exist, may be in a different shape and with different actors. Particularly, in the space arena in the post Cold War era, China has emerged as a major player. Chinese intentions in regards to space weaponization are being questioned for last few years. By undertaking ASAT test in 2007 China has overtly revealed its aspirations.

Similarly, intents of other major space power like Russia need to be verified thoroughly. They are extremely uncomfortable about the US intentions in the arena of missile defence. This had become evident particularly when the former US President George Bush had signed deals to base interceptor missiles in Poland and radar in the Czech Republic. Finally, Barack Obama cancelled this plan which in certain quarters is being looked at as a diplomatic and military victory for Russia.

Before deciding to withdraw from the ABM treaty, the US administration had an alarming report available with them on issues related to space weaponization for their assessment. On January 11, 2001, a Space Commission headed by Mr Donald Rumsfeld had submitted its report to the US government suggesting that ‘space could be the next Pearl Harbor for the US’15. This assessment regarding the heightened nature for threat to its space assets had compelled the US administration to look for long-term remedies.

Chinese writings indicate that the PLA strategists are convinced that in future space will be one of the natural domains of war and that war in space will be an integral part of other military operations.

As an aftermath of the Rumsfeld Space Commission report the US government announced the need to develop a Space Based Space Surveillance (SBSS) project to develop a constellation of satellites to conduct Space Situation Awareness (SSA). The major focus of this constellation is to provide timely space situation awareness to meet up future space control operations. On May 20, 2004 a Boeing/Ball Aerospace & Technologies Corp team was awarded a $189 million contract by the US Air Force for the design and development of SBSS System. However, due to significant cost escalation and schedule delays the programme was restructured in early 2006. The launch of the initial satellite was delayed to April 2009 — a delay of about 18 months. A SBSS constellation is expected to provide the coverage required to ensure space superiority capability to the warfighter16.

It is likely that within few months of the submission of Rumsfeld Space Commission report 9/11 happened, which probably changed the nature of security discourse within the US and also in the rest of the world. Naturally, the attention of policy makers and military leadership was focused towards war on terror. Now, slowly with the war against terrorism remaining unresolved for almost a decade other important security related issues which had taken a backseat have started coming to the fore and weaponisation of space is one of them.

The last decade witnessed spurt in activities as far China’s space programme is concerned. Major successes were witnessed in regard to its manned programme and moon programme. The 2007 ASAT test indicate that the China is looking at the issues related to space weaponisation very seriously. For them space operations and space warfare are components the “informationalized,” or information age, warfare. Chinese writings indicate that the PLA strategists are convinced that in future space will be one of the natural domains of war and that war in space will be an integral part of other military operations. They are of the opinion that future enemy military forces are likely to depend heavily on information systems for military operations and hence China needs to break through the technological barriers and develop information system countermeasures in space.