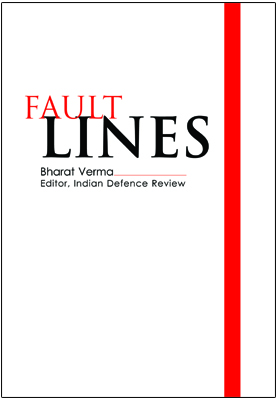 In spite of the fact that Pakistan is militarily considered a Secondary Threat by New Delhi, hostilities spearheaded against us constitute sixty per cent of the sum total. It originates with catching them young in schools — the students are indoctrinated with hatred against India. Cross border terrorism in Jammu & Kashmir is sustained by Pakistan’s ISI. Induction of sophisticated weapons, communications equipment and the infiltration by Jehad outfits into J&K without Pakistan’s patronage cannot flourish.

There simply is no other accessible route. Therefore, the responsibility to control the illegal activities of these citizens of Pakistan rests on the shoulders of Islamabad. In this unusual case, the universal military principle, which states that if one takes care of the primary threat, the secondary threat is automatically neutralised, does not apply!

Pervez Musharraf is part of this problem and not an integral to the solution. New Delhi should not shy away from accepting his role as an architect of Kargil — that is where the Lahore bus finally landed!

The fulcrum of the pan-Islamic movement against kafirs of all denominations is the Pakistan-Afghanistan combine. The present agenda is not limited to Kashmir, which it wants to carve as an Islamic state run on Wahabi philosophy from Islamabad. But extends to Western UP, West Bengal, Assam, Bihar and portions of South India. If the modus operandi in the Valley is based on ethnic cleansing, a demographic alteration through creeping invasion is the happening strategy in other parts of India. Subsequently using Assam as the launching pad, the anti-kafirs movement will crawl towards the other states of Northeast just as it presently attempts to sneak from Kargil to less populated areas of Leh and Ladakh. Emboldened by victory against the Soviet Union in Afghanistan, nuclear Pakistan in low intensity conflict war waged by its well-oiled Jehad machine is convinced that it has a low cost win-win weapon. Therefore its ambitions stand enlarged with two-fold politico-military objectives.

First, it wants to dominate the political space in the subcontinent. In addition, to balkanise or divide India in the name of religion is a dream based on the former Mughal Sultanates! Inimical activities to us are being conducted through Bangladesh, Nepal and Bhutan. Through instigation and supplies of arms to the Muslims in Sri Lanka an attempt is underway to develop a foothold for exporting Jehad to the South. Second aim of this pan-Islamic movement is to dominate the resource rich Central Asia through spread of Jehad beyond Afghanistan.

Pervez Musharraf is part of this problem and not an integral to the solution. New Delhi should not shy away from accepting his role as an architect of Kargil — that is where the Lahore bus finally landed! For the last four years he has been busy encouraging demographic resettlement of PoK with population inducted from outside to increase intensity of proxy war inside Jammu & Kashmir. Since Zia’s time Musharraf’s rise in the army (from a colonel to a General) is the result of contribution to the cause of so-called Jehad. If the General dumps Jehad that he nourished and honed, he will be replaced. As a Mohajir, per force he has to act more Punjabi Musalman than a Punjabi Musalman! Incase he does not dump Jehad, the IMF drip on which Pakistan lives may be switched off. It’s a Hobson’s choice.

Therefore the charm offensive launched by President Musharraf in the garb of reconciliation is merely a tactical retreat. This enables Pakistan to gain time for re-grouping and marshalling of forces by a country that is under enormous economic strain. In view of the demographic changes being effected in PoK, we will commit a grave folly by the creation of a “soft border”.

The suggestion that J&K be trifurcated and the Valley which is a Muslim majority area be given independence is a devious suggestion. First, it will not remain independent. Second, the two-nation theory has collapsed with the creation of Bangladesh and Pakistan Talibanised. Third, it undermines our foundation laid on secularism and will only accelerate the process of ethnic cleansing. Corollary to this assumption implies that all conclaves with predominant Muslim population should be autonomous or independent! It is the eighty three per cent majority that guarantees the multi-cultural plurality of the Indian society. Today, despite this preponderance it is stressed out and insecure.

Corollary to this assumption implies that all conclaves with predominant Muslim population should be autonomous or independent! It is the eighty three per cent majority that guarantees the multi-cultural plurality of the Indian society. Today, despite this preponderance it is stressed out and insecure.

This increases the chances of a major backlash if the poison of Jehad being introduced in the social fabric of a secular society is permitted to grow its tentacles. Fourth, Pak experiment with democracy has failed continuously due to one single factor — Islamic fundamentalism. While the Jehad Factory is located in the geographical area of Pakistan-Afghanistan, the Jehad network extends to Central Asia, West Asia and Africa. Its roots are getting fortified within EU and the USA through sleepers. On what ground can Islamabad advocate protection of rights of people in Kashmir or elsewhere when it refuses to protect the rights of minorities within Pakistan? Further, do we really want to construct the Indo-Iran gas pipeline overland at this point of time? With revenue exceeding 600 million dollars annually, Pakistan will only use it to fan the fire against India. The important aspect the policy maker must consider is that by helping Pakistan with economic and trade concessions, we are only increasing their ability to fund the Jehad against us.

The above wrap-up constitutes sixty per cent of the threat perceptions to India. If this slice of the pie is neutralised, India possesses the potential to emerge as a global player in no time. Western Powers and China therefore use Pakistan as a counter weight — rapid rise of India for them is not a desirable goal! The balance of forty per cent contains threat from others and through faulty governance within. However, militarily the primary threat in long term is posed by China.

The reason it does not blip on New Delhi’s radar often is due to the fact that Beijing has fine-tuned and boosted its surrogate’s hatred against India to keep the latter pre-occupied within the subcontinent without a direct intervention. This way China reaps two benefits. First, this disallows power rivalry in Southern Asia. Second, the fall out of Indian public opinion against China remains minimal. Therefore recent offers to reduce nuclear or military power incase of a breakthrough during Indo-Pak Summit are misplaced. While China subtly wants to shift Indo-China power equation to Indo-Pak debate, New Delhi must avoid walking into this trap.

We should insist on Pakistan reining in its citizens’ nefarious activities on the Indian soil. Neighbors who profess intentions to live in peace do not print and push fake currency or run military training camps and launching pads for infiltration along the borders. However, if President Musharraf cannot halt this antagonism immediately, we are left with no other alternative but to combine covert and overt actions to achieve zero tolerance. After all Islamabad has never been a poem but an essay in intrigues and treachery since 1947!

One thought on “Threats from Pakistan”