There was No Need to Amend the Act 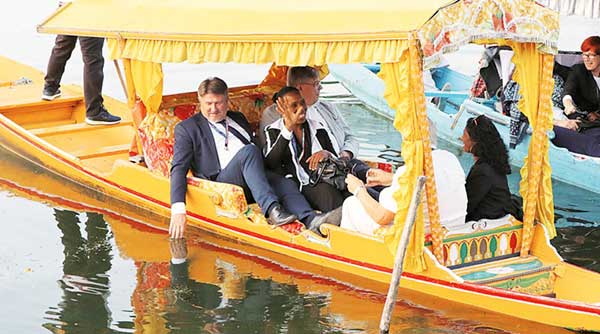 Ever since Sheikh Mohammad Abdullah assumed Prime Ministership of the erstwhile state of J&K, there was an apprehension among the people of Jammu & Ladakh about his intentions and secular credentials. He soon started showing his colours and the trait of exclusivity in favour of Kashmiri speaking Muslims belonging to the Valley with total disregard to the hopes and aspirations of the rest of the people of the state. He started working towards establishment of a “State within the State” with the help of Jawahar Lal Nehru led Congress government at Delhi which was more than eager to accommodate him and his personal ambitions. His cadre proudly announced, “Ek Rahnuma-Sher-e-Kashmir, Ek Jammat-National Conference, Ek Jhanda-Hal” (One Leader-Sheikh Abdullah, One Party-National Conference, One Flag-Plough-NC’s flag), thereby undermining the authority of the government of India and the National Flag. NC was against the full integration of the State with Republic of India. It had its way through Delhi Declaration and inclusion of Articles 370 and 35A in the Constitution of India.

The opposition to Sheikh was spearheaded in Ladakh by KushakBakula and in Jammu by Pt PremNath Dogra under the banner of PrajaParishad. PrajaParishad launched an agitation in 1949 which was brutally supressed by Sheikh Abdullah with the support of Nehru by dubbing it “communal.” PrajaParishad movement received the support of newly formed nationalist party Jan Sangh that was opposed to the appeasement policies of Nehru. Its founder president Dr Syama Prasad Mookerjee died under mysterious circumstances while under detention at Srinagar. It is alleged that he was deliberately killed through neglect by the Sheikh Abdullah government.

The whole nation began to support the demand of “Ek Pradhan, Ek Vidhan and EkNishan” through total integration of the state with the Union but Congress did not act. PrajaParishad continued to struggle for total integration but due to Delhi’s unwillingness and pro-Kashmiri attitude, the movement subsided. Rest is part of recent history leading to emergence of Bhartiya Janata Party (BJP) which spearheaded the movement for ending exclusive status of J&K.

Nation’s aspirations were fulfilled on August 5, 2019 when the Union Home Minister made an epoch-making announcement in the Rajya Sabha informing the nation Modi government’s momentous decision to suspend Article 370 and revoke Article 35A. Simultaneously, he introduced J&K Reorganisation Bill-2019, bifurcating the state into two union territories, which became an Act after passage by both houses of the Parliament and Presidential consent. Doors were opened for the total integration of the Union Territories of Ladakh and Jammu & Kashmir with mother India.

In continuation of the above process the Home Ministry issued an Order called the Jammu and Kashmir Reorganisation (Adaptation of State Laws) Order, 2020 dated 31st March and was to come into force with immediate effect. Order No. 14 titled The Jammu And Kashmir Civil Services (Decentralization And Recruitment) Act (Act No.XVI of 2010) aimed at amending certain provisions of the said Act necessitated due to abrogation of Article 35A. Since the concept of “permanent resident of the state” had become obsolete, there was need to define the resident of the state eligible for purposes of appointment to any civil service in the Union Territory of J&K as contained in the Act. A new para 3A was inserted defining Domicile for the said purpose.

The said clause to my mind was done deliberately to derail the entire process as is borne with the subsequent events which triggered spontaneously throughout the UT with the Kashmiri lobby leading the onslaught, terming it as a “sell out”, hasty and ill-conceived”, “betrayal of the youth”, “attempt to change demography” and many other adjectives. Mind it, all this happened even before the ink had dried on the government notification at supersonic speed.

The term Level 4 was to my mind added deliberately because it confused with Class 4 and was used by all to mislead the youth that only Class 4 jobs are for locals and rest all other jobs are open to “outsiders”. A fear of competition was instilled in them. Though Level 4 had posts from SL1, SL2, SL3, Level 1to 4 and included most of the class 4 and non-gazetted government jobs yet its inclusion was a deliberate ploy to create confusion.

Thus, the intention of the government was clear. It wanted all district and divisional cadre posts for the domiciles else the amendment in the ibid order should have read “Domicile of Union Territory of Jammu and Kashmir for posts carrying a pay scale of not more than Level 4” and not just “Domicile of the UT of J&K.  It was very clear that all this was done deliberately by certain vested interests in the government who were working for the Kashmiri lobby. The resultant spontaneous anger and uproar also indicates that not many read the original Act duly amended but relied more on rumours and vilification campaign unleashed by parties like NC, PDP, Congress, CPI, newly formed JKAP and NPP., which are vying for status quo.

Had this clause of Level 4 not been added deliberately and mischievously all District and Divisional level cadre posts would be reserved for the domicile as is the trend in other states like neighbouring HP, which has class 3 & 4 posts reserved for the domicile. The youth would have not acted angrily because 77000 of the total 84000 jobs would have been reserved for them. Only 7000 jobs (state cadre posts) were left to compete, which the talented youth would have taken as challenge and accepted gladly. Why should the youth of Jammu which is proud and highly talented be afraid of competing for gazetted posts?

According to National Human Development Index 2018, J&K is placed at 17th much above the states like UP, Bihar, Karnatka, Gujarat, Telangana, Chattisgarh, West Bengal, MP, Rajasthan, Odisha etc. Why should they fear but the Kashmiri lobby and their sympathisers in Jammu succeeded in misleading them because to them an isolated J&K suits more than a fully integrated J&K, they had always been opposed to it for their personal ambitions but not for the collective good interest of the region.

Ultimately, the “status quo” lobby had the last laugh and succeeded in forcing the MHA to rescind its earlier order and issue a fresh order titled “Jammu & Kashmir Reorganisation (Adaptation of State Laws) Second Order, 2020 dated 3rd April 2020. The new order removed the mischievous clause of Level 4 and made all three district, divisional and state cadre posts reserved for the domiciles only.

Was it the social media trolls numbering almost 80000 or the wilful machination of the “status quo” lobby responsible for this hasty response of the MHA will remain shrouded in the files of MHA? Even then, to my mind there was no need to amend the entire Act but omission of the Clause of Level 4, which to my mind was part of a deliberate conspiracy, should have been omitted ensuring all District and Divisional cadre posts were for the Domiciles only. It appears a case of admitting failure even before sitting for the exams.

Having tasted success, the status quo lobby was emboldened and renewed their vilification campaign with fresh allegations of the move being first step towards changing the demography of Kashmir and that sharing the jobs with domicile amounted to betrayal of the promise made to the youth post abrogation of 370 that henceforth all jobs will be for youth of J&K only, a spin-doctored and erroneous contention. What matters to these leaders is not the welfare of the youth but to continue to assault BJP for political reasons.

Moreover, the allegation of demographic change is coming from those leaders and political parties who were the mastermind of the biggest demographic assault of the century wherein lakhs of Kashmiri Hindus were hoarded out of Kashmir Valley turning the inclusive, tolerant and composite landscape of Kashmir into an exclusive monolith using the gun in the name of jihad. How can their return and a few others from the mainland India change the demography when it is already dominated by 98% from one religion only? Also, the decadal growth rate of the Kashmiri Muslims is much higher than the national level as supported by the census of 2001 and 2011.

Who will benefit from the new rule? It would be the wards of West Pakistan refugees, Balmikis, Gorkhas, Punjabis and migrant labour. All except the migrant labour are the inhabitants of the state for periods much longer than 15 years and had been unjustifiably denied the basic facilities including jobs under the garb of 35A for the reasons well known to Kashmiri leaders. They will neither change the demography nor snatch the jobs of local youth as they are very much part of our existing eco-system.

As far as migrant labour is concerned their number eligible for jobs may not be even a few hundred when the total jobs at stake are 50,000 while the total government jobs amount to 4.5 lakh. The objection to including the wards of All India Services and other Central government departments is also not justified as the Act states that they “shall have served for 10 years.” The number of their wards seeking state government jobs would not be even in hundred also. It is the mind-set of the status quo lobby which is yet to come out of the ‘special status’ syndrome which is misleading the youth.

Their anger and opposition has nothing to do with the interest of the local youth but to build a narrative for restoration of 370 and 35A in a different avtaar. All other alibis are being used as means to the end.