The ‘VVIP’ Helicopter Scandal: Steering towards a Positive Response 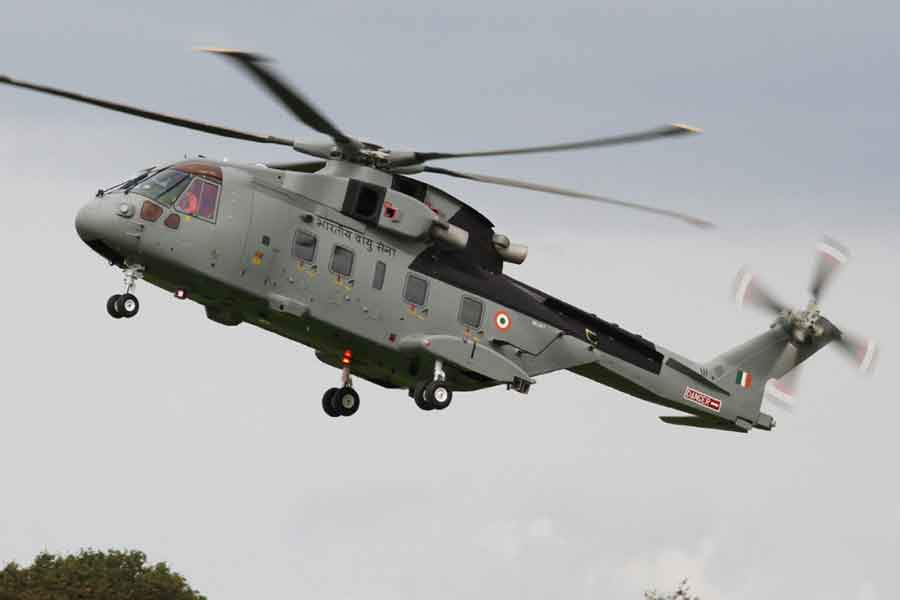 India should be vigilant to enforce its existing laws, principally the Prevention of Corruption Act (PCA). Section 7 of the PCA makes it a criminal offence for any public official to take “gratification.” Section 8 punishes perpetrators of bribery. The PCA has been faulted, by international standards, due to its poor enforcement record. The VVIP helicopter scandal is an opportunity for Indian authorities to improve the record and communicate to government officials and to companies, in and out of India, that corruption in defence procurement will not be tolerated.

Since February this year, investigators in Italy and India have been pursuing a scandal involving the sale by Finmeccanica of 12 AgustaWestland AW-101 helicopters to India for ‘VVIP’ travel. Allegations have been made that bribes and agent fees amounting to $65 million were paid to secure the $750 million sale. The investigation again focuses world attention on India’s defence acquisition process – and on the continuing problems of corruption that infect government processes in India.

Since 2009, India has purchased $14.3 billion (Rs 78,000 crore) to import weapons. SIPRI, the international research institute, reported recently that India now is the world’s largest importer of weapons. India’s foreign military purchases are accompanied by ‘offset’ obligations that require foreign sellers to purchase supplies and services from Indian sources worth at least 30 per cent of the sale price.

The latest controversy casts a harsh light on the role of middlemen and consultants, and shows how offset contract arrangements can be misused to become vehicles to flow funds for kickbacks and other illegal purposes. Also exposed is the risk that corruption distorts India’s procurement process where it produces deviation from stated performance requirements as to favour one over other competitors.

Reaction by the Government has been both swift and strong. Investigations have been mounted by the Central Bureau of Investigation (CBI) and a criminal investigation has been initiated against a former top official of the Indian Air Force Marshal and his relatives, following filing of a First Information Report. Prosecutions may follow under the Prevention of Corruption Act (PCA). Simultaneously, the Ministry of Defence is pursuing contractual remedies including those afforded by the Integrity Pact that accompanies each defence contract. Under consideration are contract cancellation, demand to recover sums paid and potential debarment of the companies involved.

All this occurs while the Ministry of Defence has been working to complete the next set of revisions to India’s Defence Procurement Procedure (DPP). Various press reports indicate that the Union Government intends to respond to the VVIP helicopter scandal by favouring indigenous sources of supply rather than those from abroad. Defence Minister AK Antony has said that indigenisation is the “ultimate solution to the scourge of corruption.” Media sources indicate that domestic sources – public and private sector – will be given a “right of first refusal” for new system purchases. Also under consideration is the exclusion of software services and most forms of consultancies from eligibility to satisfy offset requirements.

Defence Minister AK Antony has said that indigenisation is the “ultimate solution to the scourge of corruption.”

India is right to pursue the scandal related to the VVIP helicopter deal aggressively. At the same time, India should take care not to draw the wrong conclusions from the sordid episode or to take the wrong steps in response. Steps taken must be positive rather than reactive.

First and foremost, India should be vigilant to enforce its existing laws, principally the PCA Section 7 of which makes it a criminal offence for any public official to take “gratification.” Section 8 punishes perpetrators of bribery. The PCA has been faulted by international standards, due to its poor enforcement record. The VVIP helicopter scandal is an opportunity for Indian authorities to improve the record and communicate to government officials and to companies inside and outside of India that corruption in defence procurement will not be tolerated.

India should act to realise its contractual rights. Under the Integrity Pact that accompanies the VVIP helicopter supply contract, India has a right to recover any sums paid to middlemen, agents or brokers to facilitate the illegal scheme. As to contract cancellation, or debarment, India should consider its own interests. It can redeem its financial loss and impose sanctions on those responsible for misdemeanor without depriving its Armed Forces of equipment they may need and without excluding suppliers who only are corporate affiliates of culpable companies but otherwise have no involvement in transgressions.

India should strengthen its legal regime to address official corruption. The pending Public Procurement Bill (PPB) 2012, introduced in May 2012, should receive renewed attention and become law. That Bill has as its express purpose ensuring “fair and equitable treatment of bidders, promoting competition, enhancing efficiency and economy and maintaining integrity and public confidence in the procurement process.” These are goals to embrace and achieve.

India should be realistic about what its present defence industrial base is able to accomplish.

India should not condemn all foreign suppliers because of the conduct of one or a few. Many of the foreign suppliers upon whom India has relied, are subject to rigorous laws such as the US Foreign Corrupt Practices Act (FCPA) and the UK Anti-Bribery Act. These companies have powerful incentives to act ethically. They should not be excluded from participation in India’s markets. They will welcome more rigorous domestic enforcement of anti-corruption measures.

India should consider using defence procurement as a “model” for new structures and procedures that will reduce both the incentive and opportunity for corruption. For complex historical reasons, it is thought that much of the Indian bureaucracy anticipates facilitation payments and gratuities as an ordinary, if not deserved, cost of performing both ministerial and discretionary functions. This culture cannot be reconciled with the compliance obligations of ethical international business. Nor can it be tolerated in the especially sensitive area of defence procurement where great amounts of public funds are spent for purposes that go to the heart of national security.

At the national level, India might consider creating special authorities and bureaucracies to pilot new methods to limit exposure to corrupt influence. For example, the Government might create centralized authority to coordinate required business licensing and approvals for defence ventures – especially if new defence procurement policies tilt towards ‘Buy and Make (India)’ with the required 50 per cent domestic content. By extending the term of assignment for civil servants in key defence procurement posts and by improving their pay, the Government could cultivate greater expertise, foster continuity and reduce susceptibility to receipt of illegal ‘gratification’.

Indigenisation is a national objective as India understandably wishes to increase its role in defence equipment manufacturing and to reduce its vulnerability to interruption in sources of supply or resources for equipment sustainment. At the same time, India should be realistic about what its present defence industrial base is able to accomplish. While self-sufficiency is one goal, another is that the Armed Forces have timely receipt of modern, capable equipment. Exclusion of foreign sources from the Indian defence market works against both goals. India needs the technology and know-how from foreign sources. It should act to facilitate – not frustrate – foreign partnerships. Forcing domestic responses to requirements that exceed domestic competence is a recipe for further delay, frustration and waste.

The sectoral limit on Foreign Direct Investment (FDI) in defence industries must be revisited. The present cap of 26 per cent causes many leading, ethical international companies to avoid defence cooperation within India because they lack sufficient control to assure compliance with anti-corruption regimes. Should the FDI limit be increased to 49 per cent, it will encourage foreign source investment and thereby help India achieve the domestic industrial base it seeks. Equally important, an increase in FDI will facilitate transfer of technology as companies have proven reluctant to share crucial IP with ventures where they have only a small minority interest.

The Government must recognise and deal responsibly with both the obvious and the subtle barriers that frustrate effective foreign cooperation with Indian partners. One area that deserves attention is the practice of ‘compulsory licensing’ that has surfaced in dealing with Indian government offices and some Indian companies. This is a poorly disguised way of extracting facilitation payments and other gratuities from foreign companies – requiring them to ‘pay to play’. It must be eliminated. Ethical international concerns will choose not to work in India if, to do so, requires violation of their national anti-corruption regimes.

Excluding software services from categories of work eligible for offset credit is contrary to India’s own interest. Today, most defence equipment and supporting services depend upon software and India today has world-class capabilities to develop software and software-reliant systems useful for civil aerospace and well as for defence purposes. Increased utilisation of this knowledge base should be encouraged, not denied. India’s national goals are advanced if foreign sellers can realise credit for bona fide software and solution development in India. The Defence Procurement Procedure (DPP) can be modified to require increased documentation to demonstrate that genuine work is being performed on offset contracts. The Government can increase its rights to audit and examine contractor records and can sanction companies found to submit misleading reports.

Fundamentally, the VVIP helicopter scandal shows that the risk of official, large-scale corruption remains omnipresent in contemporary India. This risk reflects a combination of causes and circumstances that will be difficult to overcome and the effort will take a long time. To align itself with international best practices however and to invite foreign help to achieve pressing national needs, India must work to change habits that accommodate if not anticipate ‘gratification’, small and large, for official acts. Defence procurement can be an area where the national Government sets a positive example. The recent scandal should precipitate positive changes towards a culture of compliance and encourage corporate acts to follow suit.

Robert S Metzger is a lawyer in private practice with the law firm of Rogers Joseph O’Donnell, PC and is a former Research Fellow at the Centre for Science & International Affairs, John F Kennedy School of Government, Harvard University. He is a member of the International Institute of Strategic Studies.

2 thoughts on “The ‘VVIP’ Helicopter Scandal: Steering towards a Positive Response”