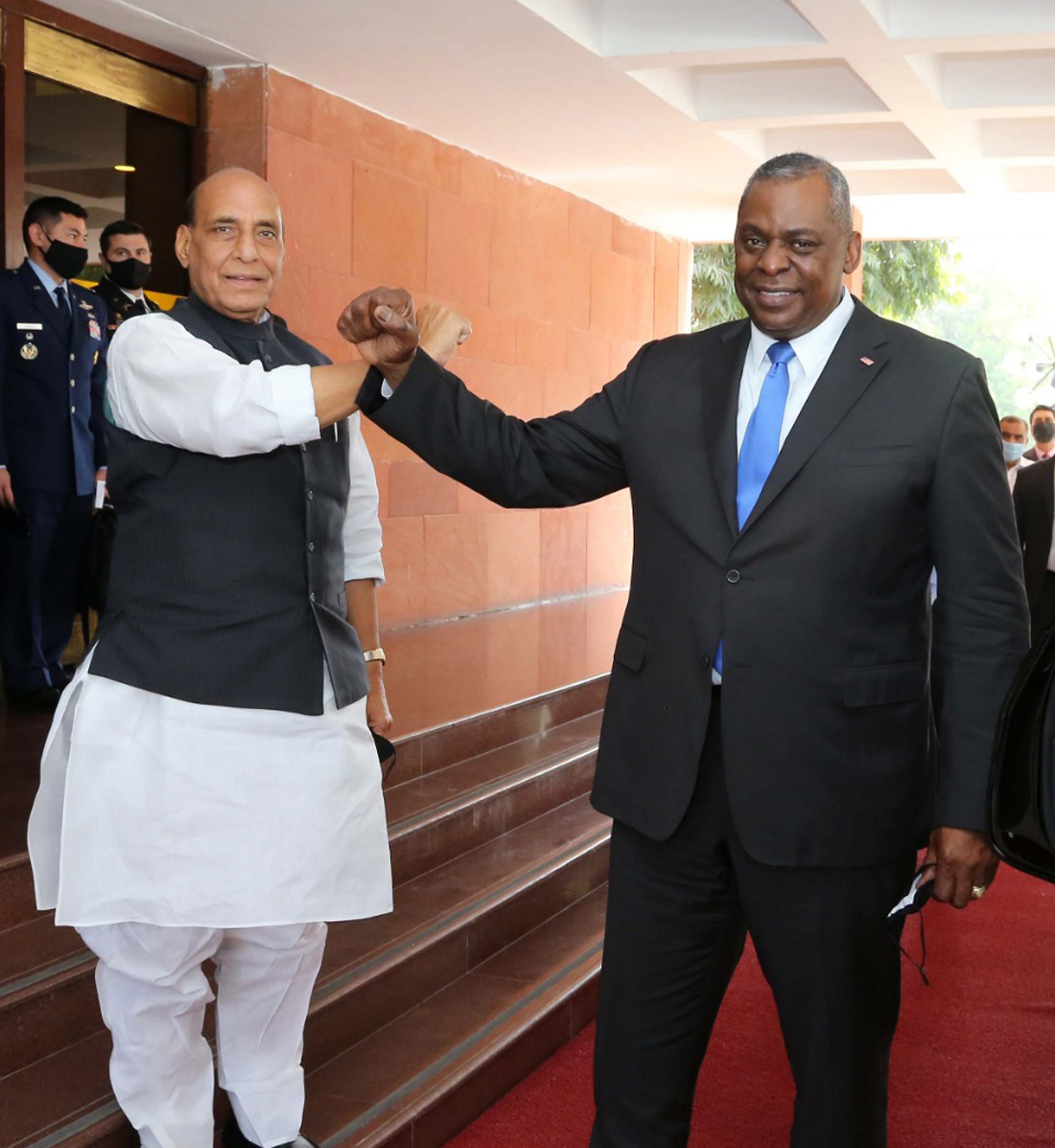 The Union Minister for Defence Rajnath Singh with the US Defence Secretary Lloyd Austin after bilateral talks, in New Delhi on March 20, 2021.

Defence Secretary Lloyd Austin, a retired Army general selected by Biden to run the Pentagon, is the first Cabinet member in the new administration to visit India. He met India’s Prime Minister Narendra Modi and other senior officials on 19 March 2021 as the United States works to expand partnerships to counter an increasingly assertive China.

“Secretary Austin commended India’s leadership role in the Indo-Pacific and growing engagement with like-minded partners across the region to promote shared goals,” said John Kirby, a Pentagon spokesman. “The two sides reaffirmed their commitment to promote a free and open regional order.”“India and US are committed to our strategic partnership that is a force for global good,” he said.

Austin’s trip in India casts a wary eye at China, whose forces engaged in combat with Indian troops at their shared, disputed border last year, causing fatalities on both sides. The incident has helped foster the belief that India may be open to new collaboration with the United States and other countries on China issues. The first senior defence official said the United States wants to exchange views on security in the region, “where we see China’s assertive behavior and malign influence at a number of points.”

In recent years, India has expanded its spending on U.S. weapons, bringing in billions of dollars in helicopters, Howitzers, cargo planes and other equipment. India also takes part in Malabar, a naval exercise in the Bay of Bengal and Arabian Sea that also includes the United States, Japan and Australia.

In 2018, the United States also made a symbolic change with a direct nod to India. Its four-star military headquarters overseeing operations in the Pacific and Asia was renamed Indo-Pacific Command, after decades of it being called U.S. Pacific Command.

After holding wide-ranging talks with Defence Minister Rajnath Singh, Austin said India is an increasingly important partner amid rapidly shifting international dynamics and Washington was committed to a “forward-looking” defence partnership with New Delhi as a central pillar of its approach to the region.

“As the world faces a global pandemic and growing challenges to an open and stable international system, the US-India relationship is a stronghold of a free and open Indo-Pacific region,” he said.

The US Defence Secretary said as the Indo-Pacific region faces challenges to a free and open regional order, cooperation among like-minded countries is imperative to securing the shared vision for the future.

“We discussed opportunities to elevate the US-India Major Defence Partnership…a priority of the Biden-Harris Administration through regional security cooperation, military-to-military interactions, and defence trade,” Austin said.”In addition, we are continuing to advance new areas of collaboration, including information sharing, logistics cooperation, artificial intelligence; and cooperation in new domains such as space and cyber,” he added.”As the Indo-Pacific region faces acute transnational challenges, such as climate change, and challenges to a free and open regional order, cooperation among like-minded countries is imperative to securing our shared vision for the future,” he said.”Despite today’s challenging security environment, the partnership between the US and India, the world’s two largest democracies, remains resilient and strong and we will seek every opportunity to build upon this major partnership,” he added.

In his statement, Austin also referred to Prime Minister Narendra Modi’s comments that India stands for “freedom of navigation and overflight, unimpeded lawful commerce, and adherence to international law”.”This is a resounding affirmation of our shared vision for regional security in the Indo-Pacific. And it’s clear that the importance of this partnership, and its impact to the international rules-based order will only grow in the years ahead,” he said.

He said there was a discussion on engagement with like-minded partners through multilateral groupings such as the Quad and ASEAN.

People familiar with the US official’s visit said earlier that India’s plan to procure around 30 multi-mission armed Predator drones from the US for the three services at an estimated cost of over $3 billion is expected to figure in Austin-Singh talks.In June 2016, the US had designated India a “Major Defence Partner”.

The two countries have also inked key defence and security pacts over the past few years, including the Logistics Exchange Memorandum of Agreement (LEMOA) in 2016 that allows their militaries use of each other’s bases for repair and replenishment of supplies as well as provides for deeper cooperation. The two sides have also signed COMCASA (Communications Compatibility and Security Agreement) in 2018 that provides for interoperability between the two militaries and provides for sale of high-end technology from the US to India.

Austin had discussed violations of human rights in India during his meetings with external affairs minister S. Jaishankar.“We have to remember that India is our partner, a partner whose partnership we value. And I think partners need to be able to have those kinds of discussions. And certainly, we feel comfortable in doing that. And you can have those discussions in a very meaningful way and still make progress,” Austin said in response.

Jaishankar is said to have agreed and emphasised that a strong relationship between the two democracies was not only important for both countries but for the rest of the world. He refuted all charges and explained the true picture of human rights violations to Austin convincingly.