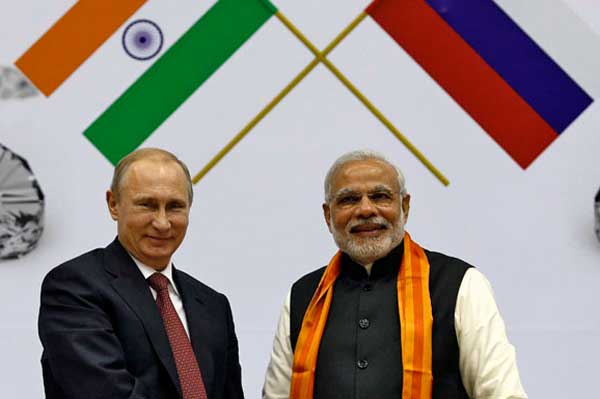 The bilateral summit between Prime Minister Narendra Modi and President Vladimir Putin on December 6, 2021, will be watched with interest world over, particularly by the US and China. The summit is an annual event though it did not take place last year because of the COVID-19 pandemic.

Russian Foreign Minister Sergei Lavrov, Russian Defence Minister Sergei Shoiguand Rosneft head Igor Sechin will be part of the Russian delegation and are expected to arrive in India on December 5. Rosneft Oil Company is a Russian integrated energy company headquartered in Moscow. The two defence ministers will hold a meeting under the framework of the India-Russia Inter-Governmental Commission on Military-Technical Cooperation. Similarly the two foreign ministers will hold discussion separately including co-chairing the two Inter-Governmental Commissions – one on Trade, Economic, Scientific, Technological and Cultural Cooperation (IRIGC-TEC).

Following the above meetings, the foreign and defence ministers of the both countries will hold the inaugural ‘2+2’ Ministerial Dialogue on the morning of December 6, which is expected to cover bilateral, regional and international issues. Following this, the 21st Bilateral Summit between Prime Minister Narendra Modi and President Putin will be held in the afternoon of December 6. Following the Summit, a package of some 10 agreements in various fields including defence, trade and investment, and science and technology is expected to be signed. A joint statement is also to be issued.

Before coming to India, Putin gave a statement, highlights of which are: in talks with PM Modi, new large-scale initiatives will be chalked out to further develop the bilateral strategic partnership; bilateral trade shows good dynamics, as do sectors of energy, innovation, space, and producing  vaccines and medicines for the pandemic; extensive cooperation in the defence sector exists including through joint ventures, and; India is one of the authoritative centres of the multi–polar world with a foreign policy philosophy and priorities that are closely aligned with Russia.

The spokesman of External Affairs Ministry has said that both leaders will review the state and prospects of bilateral relations and discuss ways to further strengthen the strategic partnership between the two countries. He further said that the Summit will also afford an opportunity to exchange views on regional, multilateral and international issues of mutual interest, and provide further impetus to the India-Russia Special and Privileged Strategic Partnership.

According to Nikolai Kudashev, Russian Ambassador to India, Russia and India are expected to conclude agreements on defence, space and transport during the summit. He also said that India and Russia are discussing joint space exploration, including the exploration of the moon.Kudashev said that Russia is thinking about creating space stations and added, “Russia is proud that our experience in the exploration of the Moon and manned space exploration is being used in the Indian missions Chandrayan and Gaganyan.” He further said that in the field of space, the supply of engines and even joint engine building is being discussed, as also joint creation of launch vehicles (both heavy and light and ultra–light) plus joint developments of satellites.

Yuri Ushakov, Aide to the President Putin has said that the talks between President Putin and Prime Minister Modi in India include a tête-à-tête dinner, which “allows us to discuss the most sensitive international issues’ and that Russian and India are exploring opportunities for joint development of hydrocarbon fields on the Arctic shelf and the Far East.

From the above it is apparent that the Summit and the ‘2+2’ Ministerial Dialogue will take the bilateral partnership to the next level. This will include the framework for military-technical cooperation for the next decade. As well as future framework in trade, economic, scientific and technological cooperation, A bilateral logistic support agreement is also likely to be signed since both countries have reportedly reached the final phase of negotiation for the agreement. Signing  this agreement will allow militaries of the two countries to use each other’s bases for repair and replenishment of supplies.

India’s Defence Acquisition Council (DAC) headed by the Defence Minister has accorded permission for the production of AK-203 assault rifles in India on November 24. About 6,70,000 AK-203 assault rifles are to produced by the Indo-Russia Rifles Private Limited (IRRPL) at Amethi. What will be included in the framework for military-technical cooperation over the next decade is not known but logically it should include cooperation in technologies covering hypersonic and its counter, stealth, drones including underwater drones, EMP weapons, cyberspace and space – especially with reference China weaponising space.

In terms of energy cooperation, India has special interest in the Arctic and Russia’s Far East. As of now, India’s investment in oil and gas projects in Russia exceeds US$15 billion; the region being the single largest destination of Indian overseas investment in the oil and gas sector. Russia holds the world’s largest known reserves of natural gas and most of these reserves are present in the Russian Far East. India’s Act Far East policy contributes to India’s Indo-Pacific strategy and Russian Far East is a key element of the emerging Indo-Russian partnership in the Indo-Pacific and ASEAN region.

In September 2021, PM Modi while virtually addressing the Eastern Economic Forum (EEF) had expressed optimism that India and Russia can together bring stability in global energy market. He mentioned Vladivostok as the ‘Sangam’ of Eurasia and the Pacific given its geostrategic location. At Vladivostok in 2019, Modi had announced a US$1 billion Line of Credit (LoC) for various projects in the region while announcing India’s Act Far East Policy.

India has been importing liquefied natural gas (LNG) from Russia and is looking for opportunities for cooperation in development projects in the Siberian and Arctic regions. In 2020, Indian Oil Corporation (IOC) signed a deal with Rosneft for the purchase of two million tons of crude oil annually. This was the first-ever annual oil purchase deal between the two countries.

Cooperation in combating COVID-19 and its variants (Delta and Omicron) would naturally be discussed during the Summit with both countries producing vaccines. The discussion on regional and international levels will likely cover the whole spectrum of security. Afghanistan or for that matter the Af-Pak region would come up for discussion, as would global hotspots and likely flashpoints including the Indo-Pacific region which Russia calls Asia-Pacific. The Chinese threat to India may not specifically come up for discussion but the Putin and the Russian delegation would be fully conversant with the situation.

Finally, the Indo-Russian friendship spans many decades, is time-tested and is rock solid. The Modi-Putin Summit will definitely provide a further boost to the India-Russia Special and Privileged Strategic Partnership. Hopefully, this will not affect the waiver that the US should be giving to India for importing the S-400 missile system from Russia, with President Joe Biden sitting on the waiver.

One thought on “The Upcoming Modi-Putin Bilateral Summit”