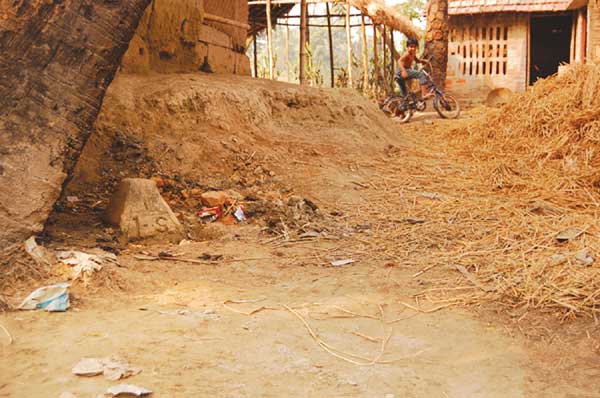 A border pillar on pathway between Indo-Bangladesh Border

Illegal Migrant 1, Name Withheld: “We paid the dalals (human traffickers). The amount varies depending on the security environment extant on that day when the illegal crossing over has been for. It varies from Rs 200 to Rs 400/-.

The subverted Indo-Bangladesh Border : I

This feedback is given to them by their counterparts who live in Indian border villages and, therefore, are in daily contact with the personnel.”

Illegal Migrant 2, Name Withheld: “I came to India with the help of dalals (human traffickers) who bribed both the BSF and the BDR. Representatives of powerful politicians assist in arranging genuine Indian documentation in exchange for money. My voter identity card was issued based on the basis of my mother’s voter identity card because she moved to India before I did.

West Bengal police intelligence and central intelligence agencies in the state have information on politicians who back illegal immigration. With the turn of the century and in the years that followed, a pan-Indian terror network operationalized by Al Qaeda backed terror groups in Pakistan and supported by their Indian collaborators came into existence.

The civil society in the border areas find smuggling lucrative and so are severely opposed to the BSFs presence. Is it any surprise, therefore, that the terrorists follow the same routes that illegal migrants take into India?

The trail of investigations into several terror attacks in the country has led straight to the porous India-Bangladesh border. So is it any surprise, therefore, that it was only in 2003 that the West Bengal government admitted in the floor of the state assembly that its eastern frontiers were indeed vulnerable to terrorist incursions.

The state government, various political parties, the local administration, local police and lower judiciary and most importantly the border-dwellers are the most important stakeholders in ensuring the uniquely porous India-Bangladesh border is inviolate. It’s only with this kind of support that the BSF can effectively carry out its task of managing and securing the borders. Unfortunately, the most important stakeholders in border management find the BSF’s role contrarian. The civil society in the border areas find smuggling lucrative and so are severely opposed to the BSF’s presence. Is it any surprise, therefore, that the terrorists follow the same routes that illegal migrants take into India?

The India-Bangladesh border is unique for several reasons. One such unique characteristic is the close proximity of Indian and Bangladeshi border villages. In the border villages there are houses where the front door is in India and rear opens on the Bangladeshi side. Such instances are the norm and not an exception. During my month long travel along the south Bengal frontier I effortlessly crossed over from India into Bangladesh and vice versa with ease. By doing this I wanted to demonstrate how easy it is for illegal migrants and terrorists to infiltrate. 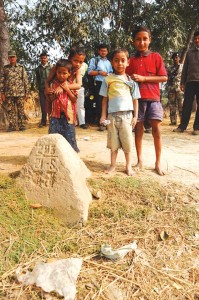 I met Aslam, a Bangladeshi in the Indian village of Haripukur. He had sauntered across the border to meet his friends and relatives. I told him I wanted to visit his village and he readily agreed to escort me. He took me through the winding lanes of Haripukur and soon we reached a narrow and precarious path behind a mud house.

On one side was the mud wall of the house and on the other a pond. I watched my steps as I followed Aslam, ten feet away he stopped at a concrete pillar. I smiled at him. It was the border pillar marking the sovereign domains of two countries. His hands carved a line in the air as he traced the alignment of border. From the pillar I took one step and I was in another country, in Bangladesh.

The porosity of the eastern frontier is so mind boggling that it should be made mandatory for bureaucrats, policy makers and politicians in key ministries dealing with security issues to visit these locations to appreciate and familiarize themselves with ground realities.

Later along with Aslam I crossed over back into India. People along bordering villages do this on a regular basis every single day. They simply walk across from Bangladesh into India. The villages are just next to each other. The houses are cheek by jowl. The people live in such close proximity that it become difficult for BSF to distinguish between Bangladeshis and Indians. Now consider how easy it is for a terrorist to walk in and to take shelter in a house in a border village. Locals revealed that this is what illegal migrants do. They cross over, take shelter in a safe house, stay there for a period of time to get their Indian citizenship documentation, basically a ration card and carry on to Kolkata and then to various parts of the country. This is how, for instance, visible Bangladeshi presence has grown in Indian cities – the rickshaw-wallahs in Noida, domestic workers in Jaipur and Delhi.

Here are snippets of my recorded conversations with Aslam, who told me that he spends most of his time in the Indian border village of Haripukur.

Q:      So you live nearby enabling you to easily cross over to India?

Unless, a massive border development programme is undertaken with a missionary zeal, Indias border dwellers will find it difficult to give up smuggling as a vocation. After all hunger and survival are primeval in nature and overshadows concepts such as national security and national interest.

In border villages like Haripukur there are village houses on the zero line, hugging each other. This is a common feature of the South Dinajpur stretch of the India-Bangladesh border. This is a border area where fencing cannot be done unless the border populations are moved back from the zero line and buffer zone of at least a kilometer is created. But villagers are against any such move. “It would be a great inconvenience for us since all our properties and lands are here. Our earnings come from our lands, so how can we shift back?” said Sheikh Younis, a resident of Haripukur village.

Terrorists don’t need an elaborate plan to infiltrate. They just have to reach a border village on the Bangladeshi side which is contiguous with a border village on the Indian side, like the village of Haripukur that stands between two countries. And walk in like I did along with local facilitators. Haripukur exemplifies the problem of effectively dominating the India-Bangladesh border. Most houses built along the zero line alignment have doors built on rear walls for easy accessibility from Bangladesh and vice versa.

Here it’s impossible for an outsider to figure out where the border begins and where it ends. At times even BSF patrols are confused and have to tread cautiously. As I walked on the border tracks I could understand and visualize the operational problems that the BSF faces in ensuring that no illegal migration takes place through such border villages.

I came across a house on the zero line, in the Indian side, stocked with phensydyl bottles. This cough syrup is consumed as an intoxicant in Bangladesh because of its strict prohibition laws. By now that stock would have already found its way to Bangladesh in small consignments and a fresh stock dispatched from Kolkata would have replaced it. Clearly, the proximity of Indian and Bangladeshi village houses is a boon for smugglers and infiltrators. 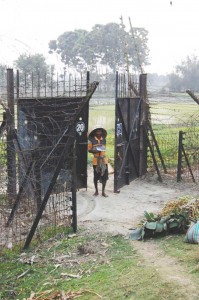 The livelihoods of the border villagers depend on smuggling and they are incapable at the moment to comprehend the security implications of their activities. Besides, the local administration is so deeply involved in these activities. Again, therefore, is it any surprise that local civil administration and the police don’t find it essential to inform and educate the border dwellers on national security concerns. Is it any surprise, therefore, that there is no incentivized reward system for locals to cooperate with the BSF in sharing real time human intelligence?

“Smuggling is the only means for us to earn our livelihoods.” I heard this over and over again. It’s an incontrovertible truth because there is no employment option in most border areas. The truth is smuggling continues unabated even in areas where the fencing is complete. The fence does not take into account either human depravity or the extra-ordinarily varied geography of the border, which cuts through Indian and Bangladeshi towns, villages, houses, agriculture fields, ponds, rivers, vast scrubland and miles of char-lands created by the meandering Ganges.

Unless, a massive border development programme is undertaken with a missionary zeal, India’s border dwellers will find it difficult to give up smuggling as a vocation. After all hunger and survival are primeval in nature and overshadows concepts such as national security and national interest.