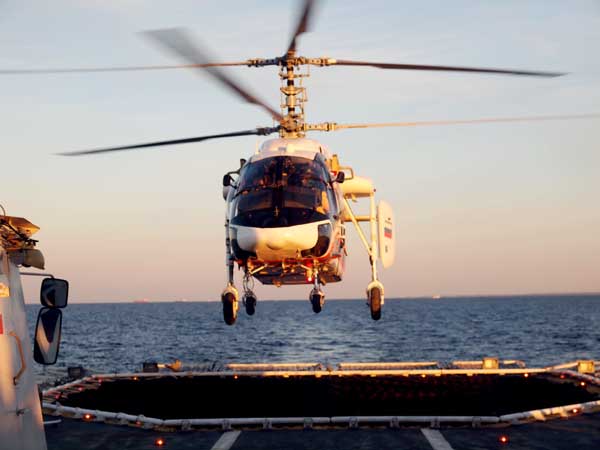 Russian Helicopters presented the ship-based Ka-226T helicopter at Aero India 2019 show. Indian customers are already familiar with the “land-based” version of this helicopter. As part of the Make in India program, the Ka-226T helicopter will be manufactured by the Indo-Russian joint venture in Bangalore to serve the interests of the Indian Air Force (IAF) and the Indian Army.

Two sufficiently powerful engines provide for a high safety level of the helicopter. Even if one of engines fails, the helicopter can continue flying with another one.

The light utility helicopter Ka-226T has a coaxial twin-rotor system, its maximum takeoff weight is 3.6 t, and it is able to transport up to 1 t of payload. The modular design is a distinctive feature of the rotorcraft.

A transport cabin that can carry up to 6 people (or modules with special equipment) can be easily installed on the Ka-226T helicopter. Improved performance characteristics of the Ka-226T helicopter, its environmental-friendliness, cost effectiveness, advanced avionics and additional flight safety solutions make this machine one of the best models in its class.

Two sufficiently powerful engines provide for a high safety level of the helicopter. Even if one of engines fails, the helicopter can continue flying with another one. This is very important when the machine is used above open water.

The ship-based version of the helicopter has a rotor blade folding system. Besides, the helicopter is equipped with a state-of-the-art avionics suite, and all its parts and systems are designed for operation in the harsh marine environment. Due to its small size, the copter can be placed on ships and small displacement vessels. The ship-based Ka-226T helicopter can be used for search-and-rescue and transport missions day and night both in favorable and adverse weather conditions.

…the ship-based Ka-226T helicopter was demonstrated to the members of the Indian delegation during their visit to Ka-series helicopters developer – Kamov Design Bureau.

Now the ship-based Ka-226T helicopters are actively supplied for special-purpose aviation in Russia. The helicopter has proven to be effective in difficult sea conditions, and this can increase the demand for the aircraft in Russia and abroad.

For instance, in the spring of 2018, the ship-based Ka-226T helicopter was demonstrated to the members of the Indian delegation during their visit to Ka-series helicopters developer – Kamov Design Bureau. The helicopter was demonstrated in relation to the tender for the supply of 111 light multi-purpose helicopters for the Indian Navy announced by the Indian government. It is expected that these aircraft will be used for search-and-rescue, humanitarian, observation and counter-terrorism operations, and will serve as guidance for naval weapon systems.

Considering the development of the joint Russian–Indian project on establishing the Ka-226T helicopter production in India, ship-based helicopters of this type are attractive for Indian customers, as they can also be produced at the JV facilities within the Make in India program.