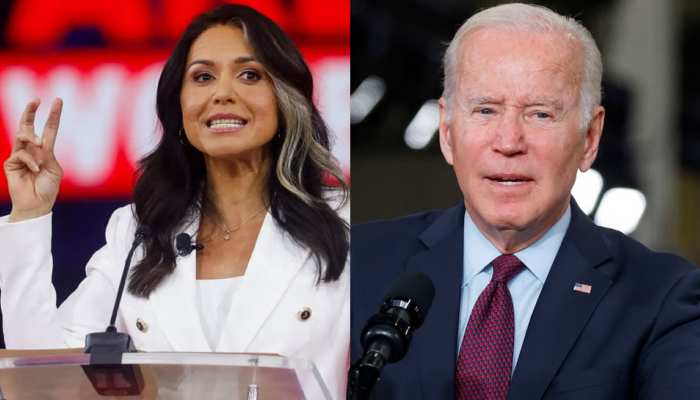 Tulsi Gabbard recently matched US President Joe Biden with Adolf Hitler saying, “I’m pretty sure they all believe they’re doing what’s best. Even Hitler thought he was doing what was best for Germany, right – for the German race. In his own mind, he found a way to justify the means to meet his end. So when we have people with that mindset, well, you know we’ve got to do whatever it takes because, as President Biden said in that speech in Philadelphia, that those who supported Trump, those who didn’t vote for him are extremists and a threat to our democracy.”

Every country head believes he/she is doing the best though some aim the best for themselves, some for the country and some for both. But there is vast difference between Biden and Hitler. Hitler was his own boss whereas Biden appears a puppet of the American deep state; perhaps because Hitler became the German Chancellor at 43 compared to Biden the POTUS at 79 plus and demonstratively suffering from dementia. Hitler mounted offensives in multiple countries but after the rout from Afghanistan Biden prefers his military to sit on the fence and get Ukrainians butchered to fight Russia.

Economy-wise, Biden looms large as the ‘Prophet of Doom for Europe’. But India must focus on the other Hitler next door – Chinese President Xi Jinping who at the age of 69 has already secured the third 5-year presidential term, which is not likely to be the last. The West-induced propaganda of Xi Jinping having been placed under house arrest evaporated even before the week-long 20th Congress of China’s Communist Party (CCP) began. Much was made of former president Hu Jintao seated next to Xi at the 20th Congress being escorted away but Hu was clearly indisposed and appeared moving in a trance.

The “house arrest” bit was quite a laugh because Xi has systematically removed all opposition under the garb of probing almost five million CCP members for possible corruption with formal criminal cases against 553 over the last decade.  Addressing the 20th Congress, Xi lambasted vested interests among CCP members; sliding toward weak, hollow and watered-down party leadership despite repeated warnings and extravagance uncovered in corruption cases.

With the 20th Congress, Xi Jinping is now in absolute control of China. All the seven members of the Politburo, including four newly appointed, are completely loyal to Xi – read blind followers. Premier Li Keqiang has been ousted from the Politburo and there is speculation that Li Qiang, the party secretary of Shanghai, may be positioned as the premier after some time.  It does not, however, indicate that Li Qiang could possibly succeed Xi after latter’s 5-year term; Xi is likely ‘President for Life’ like Mao Zedong and North Korea’s Kim Jong-un. Besides, Xi can always sack Li Qiang like Li Keqiang.

The Central Military Commission (CMC) also now has all Xi loyalists. General Zhang Youxia continues as the first ranking Vice Chairman beyond the retirement age. General He Weidong is appointed Vice Chairman of the CMC. General Xu Qiling, head of  joint staff department of the CMC till now is appointed as member of the CCP’s Central Committee.

The emphasis of Xi during the 20th Congress included following, one, China would never yield to coercive external powers attempting to blackmail, contain, blockade and exert pressure on China – obvious reference to the US; two; China must realize complete reunification (read Taiwan) and  will never promise to renounce the use of force; three, by 2027, PLA will be world class with strong strategic deterrence,  new-domain forces with new combat capabilities; strengthened through mechanization, informisation and smart technologies, and, four; priority areas will include science and technology, innovation and security.

China’s economy is experiencing a downturn but so is the rest of the world including the US. Also, the US wants to block semiconductor supplies to China and Russia but China is accustomed to steal, coax and innovate. It is for this reason that the Federal Bureau of Investigation (FBI) Director Christopher Wray recently stated that the Chinese government disregards the rule of law, fair business practices and international norms, and China continues to ‘lie, cheat, and steal’ in a bid for technical dominance.

Xi Jinping is unlikely to wait another term for attempting to unify Taiwan which is one sixteenth the size of Ukraine. Why should China wait when it has a problem of ageing population and in high on space and hypersonic capabilities? The timing could well be simultaneous with the Ukraine conflict reaching the boiling point, which the US wants at any cost. Alternatively, Xi may wait for the US to be lulled into believing that China is weighed down by sanctions and whatnot to attempt such an action.

However, Indian policy makers need to remain focused on the following:

India has been high on rhetoric about standing up to China to influence own public but negative on action. In fact the withdrawal from Kailash Range was a highly retrograde stem which our clever diplomats are trying to pass off as a military decision.

Sun Weidong, the outgoing Chinese ambassador to India says it is only natural for important neighbours China and India to have some differences but the key is how to handle the differences. “We should be aware that the common interests of the two countries are greater than differences…the two sides should strive to manage and resolve differences, and look for a proper solution through dialogue and consultation”. His logic of dialogue, however,  is farcical when after 16 rounds of military-to-military talks,  China refuses to move back to the pre-April 2020 positions.

During Sun Weidong’s farewell call on External Affairs Minister S Jaishankar, the latter said normalization of India-China relations is in the interest of both countries of Asia and the world at large and emphasized that peace and tranquility in the border areas is essential. This must have been music to the ears of Sun Weidong – the clown who was issuing veiled warnings to India from within the embassy while China was invading Ladakh.

The problem in India is that we continue to tell Pakistan that terrorism and normal relations cannot go together but we lack the guts to tell China that it cannot be business as usual if the PLA does not revert to the pre-2020 positions in Ladakh. This is what Jaishankar should have told Weidong rather than conveying that mice cannot roar.