The New Strategic Importance of Tibet? 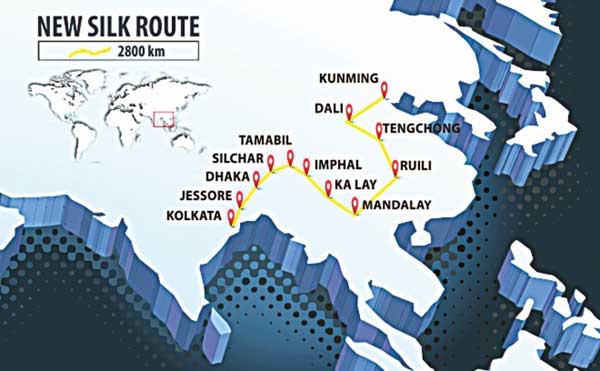 It is very rare for China to mention the ‘strategic importance of Tibet’, but it is what an article posted on the portal China Tibet Online recently did.

One of the reasons is the forthcoming 6th Tibet Work Forum which will decide the direction Tibet takes during the next decade. The ‘opening’ of Tibet towards Central and South Asia will be probably one the main decisions taken during the Forum.

It then develops each of these strategic areas.

Why to mention this now?

One of the reasons is the forthcoming 6th Tibet Work Forum which will decide the direction Tibet takes during the next decade.

The ‘opening’ of Tibet towards Central and South Asia will be probably one the main decisions taken during the Forum.

Tibet could become central to the promotion of President Xi Jinping’s pet project, ‘One Belt, One Road’.

The article calls Tibet a ‘strategic focal point’ for the scheme.

China Tibet Online elaborates: “The ‘One Belt, One Road’ strategy involves comprehensive opening up to the outside world and establishment of lasting peace, universal security and common prosperity”

It quotes an article already published on the same portal in March: “The visions and actions of promoting the Silk Road Economic Belt and the Maritime Silk Road”. With 18 provinces directly involved, Tibet, adjacent to the ‘One Belt, One Road’, certainly holds particular significance, argues the article.

By integrating Tibet to the grandiose project, Beijing believes that it can bring some prosperity to the region and more importantly, the corollary of ‘prosperity’, ‘stability’.

The author reminds its readers that in May 2013, Premier Li Keqiang put forward the BCIM-EC proposal during his visit to India, “asking that India, Bangladesh and Myanmar to respond positively.” 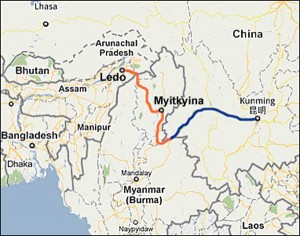 The article adds: “The proposal holds great significance for the deepening of friendly relations between the four countries and in driving the joint development of the three economic areas – South Asia, Southeast Asia and East Asia. Tibet is an important passage to South Asia and a crucial part of the ‘corridor’.”

But it is not clear how the BCIM-EC will connect to Tibet.

Possibly via Kunming and the Western part of Yunnan province, but it is a long detour to reach Tibet.

The Stillwell Road, from Arunachal to Burma, skirts Tibet, further there is no land port between Tibet and Arunachal Pradesh which would permit the trade to flourish in this remote part of the world.

Even if China develops that ‘mythic’ corridor, it is not clear once again how it will be linked with the New Silk Road. It might be a branch of the ‘Belt’.

The Tibetan, Qiang and Yi Corridor

A Chinese scholar who wrote a dissertation on the Tibetan-Qiang-Yi Corridor (‘Du Yao Mao’), thus described the area, “[it] comprises the Hengduan Mountains which located in the southeast of Tibet plateau and the high mountains and valleys area among six paralleled rivers of Min River, Dadu River, Brahmaputra, Jinsha River, Lancang River, and Nu River, as well as the adjacent area between Yunnan, Sichuan and Tibet. It’s a natural corridor for the ancient Diqiang, tribes to migrate from northwest to south where some minorities from Zang-Mian of Han-Zang language family live in, such as Zang, Qiang, Yi, Lisu, Bai, Naxi, Pumi, Dulong, Nu, Hani, Jingpo, Lahu and so on.”

Even if China develops that ‘mythic’ corridor, it is not clear once again how it will be linked with the New Silk Road. It might be a branch of the ‘Belt’.

China Tibet Online affirms: “The Qinghai-Tibet Plateau is not only the source of some of Asia’s major rivers, such as the Yangtze, Yellow, Lancang-Mekong, Ganges and Indus, but it’s also one of the world’s most concentrated areas of biodiversity, so its ecological status is very important. In recent years, due to the combined effect of global warming and human intervention, the ecological environment at the Yangtze and Yellow River source areas has shown signs of serious damage and deterioration. The Source of Rivers Ecological Protection Zone was established to restrict environmental degradation and to restore and conserve the ecological environment.”

It plays an important role in the modernization and sustainable development of China.

It might be one of the policies which will be decided during the Tibet Work Forum, but once again it does not seem to directly affect the ‘One Belt, One Road’ project.

Then the ‘Shangri-La eco-tourism circle’ is mentioned. Shangri-la is one of the favorite tourist destinations of Eastern Tibet (in today’s Yunnan province).

According to the article, the ‘circle’ includes the triangular border areas of Tibet, Sichuan and Yunnan. Once more it is more an environmental project which is certainly important for the Tibetan plateau. It says: “It is the Yangtze River’s downstream soil and water conservation area and an important ecological barrier for a number of industries. It plays an important role in the modernization and sustainable development of China. It has already been listed as a key national tourist development area and has become a popular destination for domestic and foreign tourists.”

Here too nothing concrete about Xi’s project to link Central Asia and Europe to the mainland.

A Corridor to South Asia?

The last part of the article is more interesting for South Asia as it deals with ‘China-India and China-Nepal border trade zones’.

It says: “Tibet has already opened border ports in Zham [Dram], Burang [Purang], Gyirong [Kyerong], Riwo and Nathu La. These ports are located on the overland route to South Asia and follow the same basic conditions as a comprehensive free trade zone or a border economic cooperation zone. They are the main distribution areas for trade along the China-India and China-Nepal borders.”

If Beijing is serious about linking Tibet with South Asia, more will be required to ‘open’ the borders which is presently limited to Sino-Indian ‘petty’ trade at Nathu-la. Lipulekh-la and Shipki-la (HP).

While Dram, Purang (the trade via Lipulekh in Uttarakhand also transit via Purang), Gyirong Kyerong and Riwo are all land ports with Nepal, Nathu-la, was opened for trade between India and Tibet in 2006.

If Beijing is serious about linking Tibet with South Asia, more will be required to ‘open’ the borders which is presently limited to Sino-Indian ‘petty’ trade at Nathu-la. Lipulekh-la and Shipki-la (HP).

The article mentions the recent reopening of the Sino-Indian border at Nathu La Pass to Indian pilgrims traveling to Tibet on pilgrimage: “This news was greatly received by Indian pilgrims.”

This will not change anything in the trade and will not bring any serious boost to the New Silk Road.

The conclusions of the article on the strategic location of Tibet are rather misleading in the present circumstances: “Some of the regional strategies mentioned above have already become national strategies; others have entered academic discussion or debate. Tibet is an important player in the history of the ‘Southern Silk Road’, ‘Tang-Tubo Ancient Road’ and the ‘Tea Horse Road’. It is a vital communication hub for the adjacent provinces and autonomous regions on the ‘One Belt, One Road’ strategic belt, including Xinjiang, Qinghai, Sichuan and Yunnan. It is also an important gateway for exchange with South Asian countries, such as India, Nepal, Myanmar, Bhutan and others.”

The fact is that Beijing is not ready to open land ports such as Demchok and the Karakoram pass in Ladakh, Niti-la, Mana-la in Uttarakhand, Kibutu or Tuting in Arunachal Pradesh. Why in the present circumstances, speak of ‘opening of the ‘new silk road’ to South Asia?

It is more a propaganda gimmick, to test the Indian waters and see Dehi’s reaction.

It is however true that Nepal mainly through Dram and Kyirong land ports will be flooded with Chinese tourists and Chinese goods.

But this is one-way traffic, it will not create places of cultural, spiritual and trade exchanges like the Old Silk Road did.

In other words, it is doubtful if South Asia can benefit from the project.

One thought on “The New Strategic Importance of Tibet?”