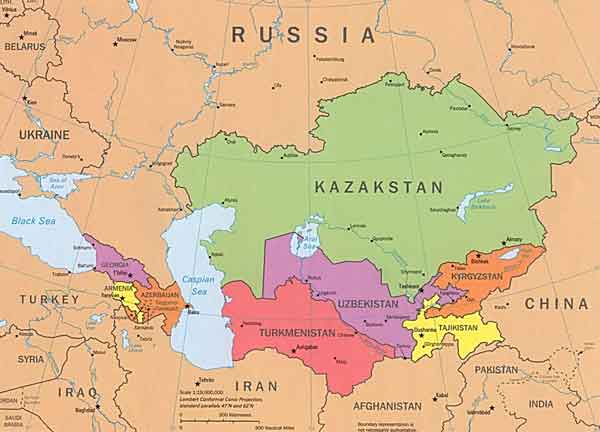 The “Great Game” was a term prevalent in the 19th century, for the strategic rivalry and conflict between the British Empire and the Russian Empire for supremacy in Central Asia. It represented the international struggle to build a stable and secure Asian rimland from the Persian Gulf on the west to India. It aimed at securing a barrier between global economies and the networks of communication and defence linked by the sea, on the one hand, and power based in the Asian heartland on the other.

India’s relations with Central Asia are influenced to a major degree by the actions of Russia, China, Iran, Pakistan and the US.

Today, the Great Game is alive again. However, it has mutated into a different dynamics with varied combinations and permutations as the actors and goals have changed with time. Specifically, the number of actors has increased, and the game is not entirely confined to the goal of security and stability of the Indian subcontinent as the geospatial centre of the Asian rimland. The availability of energy has become a larger issue. While geography remains constant there are now an increased number of factors impacting the Game, making it less predictable.

The term “The Great Game” is usually attributed to Arthur Conolly, an intelligence officer of the British East India Company’s 6th Bengal Light Cavalry, though it was romanticized by Rudyard Kipling.1 From the British perspective, the Russian Empire’s expansion into Central Asia threatened to destroy the “jewel in the crown” of the British Empire, India. As the Tsar’s troops began to subdue one Khanate after another, the British feared that Afghanistan would become a staging post for a Russian invasion of India.

The British were all too aware that all invasions into India, throughout history, were through Afghanistan and the Northwest Frontier. With that in mind, in 1838 they launched the First Anglo-Afghan War and attempted to impose a puppet regime under Shah Shuja. The regime was short lived and the first British venture into Afghanistan ended in disaster. After the annexation of the Punjab in 1849, the British Empire extended up to the Hindu Kush mountains and Afghanistan was seen as a buffer state. The Russians continued to advance steadily southward towards Afghanistan and by 1865 Tashkent had been formally annexed.

In order to secure their interests Britain launched the Second Anglo-Afghan War in 1878, when their mission was turned back from Kabul. In retaliation a force of 40,000 men was sent across the border. The second war was almost as disastrous as the first for the British, and by 1881, they again pulled out of Kabul.

The Third Anglo-Afghan War of 1919 was precipitated by the assassination of the then ruler Habibullah Khan. His son and successor Amanullah declared full independence and attacked British India’s northern frontier. Although little was gained militarily, the stalemate was resolved with the Rawalpindi Agreement of 1919 when Afghanistan became an independent state.

India has lost valuable time in creating viable leverages and lacks bandwidth to use the hard power approach in pursuing its national interests in the region.

With the end of the Second World War and the beginning of the Cold War, the United States displaced Britain as the global power, asserting its influence in the Middle East in pursuit of oil, containment of the Soviet Union, and access to other resources. This period is sometimes referred to as “The New Great Game”, and the term became an analogy or framework in the military, security, and diplomatic communities for events involving India, Pakistan, Afghanistan, and, more recently, the post-Soviet republics of Central Asia.

The Soviet war in Afghanistan was a nine-year conflict involving Soviet Union forces supporting the Marxist People’s Democratic Party of Afghanistan government against the mujahideen resistance. The latter group found support from a variety of sources including the United States, Saudi Arabia, Pakistan and other Muslim nations in the context of the Cold War. This conflict was concurrent to the 1979 Iranian Revolution and the Iran–Iraq War. The Soviet war in Afghanistan began on 27 December 1979 and ended on 15 February 1989.

The latest war in Afghanistan began on 7 October 2001 when the United States (US) launched a military operation in response to the 11 September 2001 airline attacks. The stated purpose was to capture Osama bin Laden, destroy Al-Qaeda, and remove the Taliban regime. The US stated that, as policy, it would not distinguish between Al-Qaeda and nations that harbor them. There are now two military operations in Afghanistan, which seek to establish control over the country. Operation Enduring Freedom is a US combat operation involving some coalition partners and currently operating primarily in the eastern and southern parts of the country along the Pakistan border. The second operation is the International Security Assistance Force (ISAF), initially established by the UN Security Council at the end of December 2001 to secure Kabul and its surroundings. NATO assumed control of the ISAF in 2003 and operations are still ongoing.

The Problem of Asia

Alfred Mahan, a US Navy officer and president of the US Naval War College, best known for his Influence of Sea Power upon History series of books, analyzed the geopolitical structure of world politics at the dawn of the 20th century. He divided the continent of Asia into three zones:2

To prevent Russian expansionism and predominance on the Asian continent, Mahan opined that pressure on Asia’s flanks could be the only viable strategy pursued by sea powers.

The Debated and Debatable zone, contained two peninsulas on either end (Asia Minor and Korea), the Isthmus of Suez, Palestine, Syria, Mesopotamia, two countries marked by their mountain ranges (Persia and Afghanistan), the Pamir Mountains, the Tibetan Himalayas, the Yangtze Valley, and Japan. Within it, there were no strong states capable of withstanding outside influence or even maintaining stability within their own borders. So whereas the political situations to the north and south were relatively stable and determined, the middle remained “debatable and debated ground.”

North of the 40th parallel, the vast expanse of Asia was dominated by the Russian Empire. Russia possessed a central position on the continent, and a wedge-shaped projection into Central Asia, bounded by the Caucasus mountains and Caspian Sea on one side and the mountains of Afghanistan and Western China on the other side. To prevent Russian expansionism and predominance on the Asian continent, Mahan opined that pressure on Asia’s flanks could be the only viable strategy pursued by sea powers.

Areas south of the 30th parallel were dominated by the sea powers – Britain, the US, Germany and Japan. To Mahan, the possession of India by Britain was of key strategic importance, as India was best suited to exert balancing pressure against Russia in Central Asia. Britain’s predominance in Egypt, China, Australia, and the Cape of Good Hope was also considered important. The strategy of the sea powers, according to Mahan, ought to be to deny Russia the benefits of commerce from the sea. He noted that both the Dardanelles and Baltic straits could be closed by a hostile power, thereby denying Russia access to the sea. This would reinforce Russia’s expansionism in order to obtain wealth or warm water ports. The natural geographic targets for Russian expansionism in search of access to the sea would therefore be the Chinese seaboard, the Persian Gulf, and Asia Minor.

The British continued with their obsession about the Great Game till their withdrawal from India. Sir Olaf Caroe organized the Viceroy’s Support Group (VSG) in 1942 in his capacity as Foreign Secretary in Britain’s Government of India. It worked on the premise that the security of the Asian rimland from the Persian Gulf to Indochina “is one complete strategical problem.” The security of the Gulf was bound up with the security of the Indian subcontinent which in turn depended on Burma and Indochina. A stable subcontinent formed the fulcrum in the system. Its fragmentation would leave the wings isolated and the balance broken. The notion of a continuous Great Game that would survive the withdrawal of British rule in India transfixed the VSG’s work.3

According to Olaf Caroe, the Soviet invasion of Afghanistan in 1979 was a predictable (and predicted) “after-effect” of India’s partition in 1947. By creating two mutually antagonistic successor states in India and Pakistan, the partition effectively turned the subcontinent’s power potential in on itself. For nearly a century, power based on a stable subcontinent had provided a counterpoise to Russia that had allowed the emergence of a viable Afghan state. The fragmentation of the counterpoise on the subcontinent allowed the Russians to calculate their interests and options in 1979 very differently than their predecessors had in 1838, 1878, and 1919. The continued hostility of India and Pakistan thus weighed heavily against the reconstruction of security and stability in Afghanistan. The latter thus reemerged as a base area and seedbed it had once formed for forces of regional instability and terrorism.

Zbigniew Brzezinski, a former US National Security adviser, advocated a 21st century version of the Great Game after the implosion of the Soviet Union. 4 He cast Eurasia as the playing field upon which the world’s fate is determined. As the US emerged as the world’s sole superpower, he delineated its global strategy to maintain its exceptional position in the world. Central to his analysis was the exercise of power on the Eurasian landmass, which is home to the greatest part of the globe’s population, natural resources, and economic activity. He animadverted that Central Asia is the “grand chessboard” on which US supremacy will be ratified and challenged in the years to come. The problem was to manage the conflicts and relationships in Europe, Asia, and the Middle East so that no rival superpower could rise to threaten US interests. Popular media have referred to the current conflict between international forces and Taliban forces in Afghanistan as a New Great Game. Its arena has expanded to include Central Asia, as the vantage of power has shifted to this region.