Dramatic events in the past one year since the 2006 “April Revolution” in Nepal have been redefining the political landscape of the Himalayan nation in more ways than one. One important change is the visible rise of “marginalized” groups in national politics. The “excluded” groups – cutting across ethnic, religious and language lines – are demanding their due rights.

In the midst of these changes is the rise of the Madhesis.2 This paper attempts to assess the response of the Nepalese government towards the Madhesi uprising, the shaping of the contours of the ethnic problem in the future, and its impact on peace in Nepal up in coming days and weeks and the prospects for peace  in the country.  The article ends with an assessment on India’s role in Nepal.

Madhesis3 are an important segment of the population in Nepal.4 They occupy economically  the most significant region of the country with 70-80 per cent of the country’s industries being located in the Terai region. It accounts for 65 per cent of Nepal‘s agricultural production. Needless to say, the country’s economy depends heavily on the region. Strategically, the Terai belt constitutes the lifeline of Nepal. All the key transportation routes from India pass through this region, making it the gateway to the landlocked country. Almost all the country’s import and export takes place through this region. Given these factors, any disturbance in the region involving the Madhesis becomes extremely critical as it has the potential to seriously  jeopardise the country. 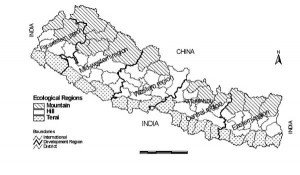 With strikes, bans, and road blockades that continue to mark the unrest in Terai, economic activities have been brought to a virtual halt.  Trade has been severely affected with goods worth millions of rupees stranded at border points and many manufacturing industries in Birgunj and Biratnagar shut down owing to crisis of raw materials. A recent report released by Nepal Rastra Bank, indicates that the country’s foreign trade recorded  dismal performance during the first nine months of 2006/07, with 2.9 per cent fall in total exports. The report identifies the Terai unrest as one of the major factors for the poor performance of the export sector.

The size of the Madhesis has been a contested issue. According to the Population Census 2001 based on mother tongue for Village Development Committees (VBCs), the Madhesis population was 6781111.5 If one were to go by this figure, the Madhesis formed 29.2 per cent of the total population of Nepal in 2001. However, Madhesi political leaders, scholars, and activists have long questioned these figures. They claim that the Madhesis form 40-50 per cent of the total population of Nepal today. For instance, Jwala Singh, leader of the Janatantrik Mukti Morcha (JTMM-Singh) has claimed that Madhesis population is 14 million.6 While the truth is difficult to establish, one can safely say that the Madhesis constitute a major chunk of Nepal’s demography.

The Unrest in Terai

During the initial phase of violence in the Terai, the government perhaps failed to respond to the problem effectively. It was busy with other issues at hand, particularly, the peace process and the formation of government.

The current Madhesi protests began to surface in late 2006. The interim constitution became the rallying point, which the Madhesis claim, has failed to address the issues related to their rights. The trouble soon took a different turn when the country’s draft interim constitution came into effect on 15 January. Rapidly, the largely peaceful protests snowballed into widespread violent demonstrations, strikes and bans. Since then, the situation has only deteriorated. Three Madhesi outfits have been leading the agitations. The outfits are:

Madhesi Janadhikar Forum (MJF) or Madhesi Peoples’ Right Forum (MPRF) headed by Upendra Yadav. The outfit has been spearheading the ongoing Madhesi agitation in Terai. MJF’s main demands are: amendments to the interim constitution to include provisions for ethnic and regional autonomy with the right to self-determination and proportional representation based on ethnic population for the elections to Constituent Assembly (CA). Yadav has also been criticised from several quarters for his alleged ties with “palace forces”. The outfit’s student wing, Nepal Madhesi Student Front severed its allegiance in March accusing their leader of working with the “royalist” to subvert the CA elections.10 Interestingly, on April 26, the MJF submitted an application for party registration at the Election Commission and said that it will participate in the CA elections as a political party.

Janatantrik Terai Mukti Morcha (JTMM-Singh faction) led by Nagendra Paswan alias Jwala Singh. JTMM-Singh group is a breakaway faction of the Maoists that has been active mainly in Siraha and Saptari districts of Terai. The group spilt from JTMM led by Jaya Krishna Goit in mid-2006. The JTMM-Singh faction has been demanding for an autonomous and separate independent Terai state; equal participation of Madhesis in government security forces. In fact, on March 30, the outfit declared the Terai region a “Republican Free Terai State.”11 The group has been accused of fueling communal feelings between “people of hill origin” and “people of Terai region”, however, Singh reportedly claimed that his group is against the “system of unitary communal hill state power” and not people of hill origin.12