The Joint Venture for AK-203: The Long Term Challenge of Indigenisation

The Army has been looking for a modern assault rifle to replace the INSAS which was inducted in 1994. The army has been generally dissatisfied with the rifle design of INSAS because of its limitation in terms of lethality, reliability, heavier weight and lack of an integrated sighting system. The Defence Acquisition Council had given in principle approval for procurement of 1.87 lakh assault rifles under the technology transfer route; with license production by the Ordnance Factory Board (OFB) in 2009. However, the Request for Proposal did not fructify as no vender could meet the stringent GSQRs. Consequently the tender was retracted in June 2015.

The procurement initiative took a new decisive turn when India and Russia reached an agreement to set up the Kalashnikov production centre in India during President Vladimir Putin’s visit in October 2018. This was followed by an Inter-Governmental Agreement (IGA) on 18th February, 2019 to produce at least 7.5 lakh AK-203 rifles in India through a Joint Venture (JV) registered on 25th February, in which OFB will have an equity stake of 50.5% and the balance by the Russian partner. This JV arrangement is analogous to the joint venture which was set up for BrahMos missile in 1998 with an equity base of 250 million.

Feature of the Present JV

The Army has found that AK-203 has better accuracy, reduced flash and recoil, better ergonomics and greater ease of operation in combat AK-203 was developed in 2016 by the Russian and has been in supply to the Russian army forces in 2018. India will be the first country to which Russia will be transferring design/manufacturing technology fully and this would be a major step in India’s ‘Make-in-India’ initiative in defence production.

The indigenization planned for AK-203 is given in the table below. 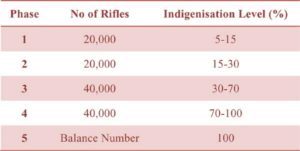 The major beneficiaries of the AK-203 deal would be Ordnance Factory Korwa in Amethi which was set up in 2007 with an investment of Rs.408/- crores to manufacture Close Quarter Battle (CQB) Carbine under Transfer of Technology (ToT). With the present order to manufacture the most contemporary rifle in the world, the factory stands a good chance of becoming the Centre for Small Arms Manufacturing in the country. With the present JV, the army’s long search for a modern assault rifle to deal with multiple challenges has come to a successful end. More importantly it would be produced in India with 100% indigenous content in less than three year’s time, making it an important landmark in the Make-in-India initiative.

Joint Ventures in the Past

This Joint Venture comes close on the heels of the joint venture between Hindustan Aeronautics Limited (HAL) and Russia to manufacture 200 light weight multi role military helicopters, which will be a replacement for the aging Cheetah and Chetak which play a very crucial rule in ferrying troupes to the mountain peaks like Siachen Glacier and evacuate them in the event of emergency. In the Kamov deal there is a promise that there would be ‘high level localisation’ in India. While 60 such helicopters would be supplied by the Russians in flyaway conditions the balance 140 would be progressively indigenised, without highlighting the likely indigenization percentage in the years ahead.

It may be also mentioned that the JV arrangement for the BrahMos cruise missile with the Russians, has been very successful. This medium range supersonic cruise missile with a speed of 2.8 to 3 mac is heavily in demand by countries Philippines, Vietnam and South Africa. While BrahMos is a success story, another futuristic aircraft like the FGFA, which was inked as a JV with the Russians, has run into serious hiccups. India has been in touch with the Russia for design, development and production of a fifth generation fighter aircraft since 2007. A preliminary design contract was signed in 2010 for $295 million and it was envisaged that both sides will contribute $6 billion each to the program to produce these aircrafts in 8-10 year’s time. One of the objectives of the programme was to expose our Indian engineers to key technologies like stealth and cruise. HAL was expected to contribute to composites, cockpits and avionics as the JV partner. Sadly this important Make-in-India initiative for a stealth aircraft now stands completely grounded because of intercine disputes on cost share, work share etc.

The experience of India in terms of technology absorption in a timely manner has been quite disappointing over the years. This is largely due to low skill levels which takes inordinately long time to inculcate state of art design and convert the drawings into production.

A case in point is Sukhoi Aircraft. ToT (1998), when it was envisaged that in 5 year’s time the indigenization level would be around 40%. However, by 2008 (10 years after the TOT contract) the actual indigenization was around 7%, with indigenisation limited to wings and the empennage. HAL as the prime production agencies has preferred to be an assembler rather than a value adder. This is manifest by the large number of Russian technicians who are permanently perched in HAL factories at Nasik and Koraput. Make-in-India is predicated on the philosophy of ‘Design to Make’ where the design of a system would be indigenous, based on which a weapon system, a tank or an aircraft would be built.

On the other hand India has predominantly chosen ‘Make to Design’ route where the drawings are imported from foreign countries. This has limited India’s capability to build an upgrade. In contrast China, which took ToT of Sukhoi 27 from Russia in 1995 has now built an advanced version of Sukhoi, which they are now exporting to countries like Malaysia. This is because of the fact that the Chinese are investing handsomely in building design capability, adopting Industry 4.0 standards like AI & robotics.

It is estimated that China will become the leader in AI, tipping USA, by 2030. In contrast, India which had technology transfer from the Russian in 1998 for Sukhoi 30, has been unable to upgrade the aircraft and is fully reliant on the Russians for improving its armaments, avionics and sensors.

One of the expected spinoffs of ToT or JV would be improvement in ‘value addition’. India’s record in designing state of art weapon systems, propulsion and avionics has been rather dismal. The DRDO, the prime design and development agency took up the Kaveri Engine Project three decades back and had to foreclose the same, because of a major design flaw noticed by M/s. Snecma during design audit. In a committee headed by Mr. Subramanian in the 1960s, to bring up a realistic road map for building gas turbine engine for aircrafts in India, the committee had observed that Indian universities and IISc do not have the necessary design capability for building an aero engine.

The Committee had recommended that the way forward for India would be to set up design institutes in India and collaborate with reputed global engine manufacturers to come with a credible prototype for the same. However, such sensible advice was put in the backburner; leading to the dismal failure of the Kaveri engine that we have witnessed. The Light Combat Aircraft (LCA), our first indigenous fighter aircraft, is being powered by a US GE414 engine!

The Defence Parliamentary Standing Committee (2007) had recommended that design institutes should be set up for state of art sub systems and platforms required by the three services. A Defence Production Policy was also unveiled (2009), recommending that funding for R&D programmes should be extended to academia, private sector who are willing to associate themselves with such design and development initiatives. These have remained pious platitudes and have not translated in the practice.

Germany and Japan were devastated by the Second World War. However, by the 1960s they had become the manufacturing hubs of the world, with significant Current Account Surpluses. While USA devalued its currency by 12% in 1971, Germany revaluated its Mark by the same percentage around the same time. This is largely due to the fact enormous skill base was built in that Germany and Japan due to their robust education system. The Noble Laureate of Economics, this year Paul Romer writes that the human capital of country is far more important than physical capital. To quote him: “physical devastation due to an earthquake can be recovered, but epidemics are far more difficult to salvage”.

India needs to draw several lessons from such best global practices. The real challenge would be how to absorb technology and achieve higher self reliance in key defence technology. This would require greater attention to quality education, build design capability within the country and collaborate with the best design houses so that we need not reinvent the wheel. The present euphoria must be punctuated with a long term road map for building India’s design capability.

A committee under Dr. APJ Abdul Kalam, Scientific Advisor to Rakshya Mantri at that time in 1993 had paved a road map for improving India’s Self Reliance Quotient (SRI) from 30% then in defence manufacturing to 70% in a decade’s time. Regrettably even in 2018, SRI has not moved beyond 30%.  As per SIPRI reports India has the unbroken record of being the highest importer of conventional arms, globally. This trend has to be reversed by paying greater attention to indigenisation, setting up state of design institutes to develop capability in critical subsystems for the three services. The present monopoly of DRDO does not lend itself to promoting such design capability.

The record of HAL in aircraft design and BEL in electronics has been quite elementary. The private sector must be encouraged to partner effectively in defence (R&D) activities. The L&T has made very credible contribution for the ATV programme and the ‘Dhanush’ program for ship based launched Prithvi missiles. The private sector must be actively associated in design activities and allowed to avail of technology from OEMs and Russia, instead of limiting such transfers to defence PSUs like HAL (Kamov) & OFB (AK-203) only. They are much more fleet footed, time complaint, cost conscious and accountable, unlike the captive Defence PSUs & OFB. The private sector has demonstrated this in the case of production of OPVs/IPVs by out competing dilatory and costly production centres like GSL.

India has achieved self reliance in production of small arms and ammunition. However the quality dimension has always been a festering issue with the services. The present JV for AK-203 will hopefully mitigate the quality and lethality concerns in small arms. However, the march towards higher defence industry capability through the Make-in-India initiative would have to transcend the present tendency to assemble and adapt the more difficult route to value add through higher capability in design and manufacture of defene platforms, weapons and complex systems.

One thought on “The Joint Venture for AK-203: The Long Term Challenge of Indigenisation”