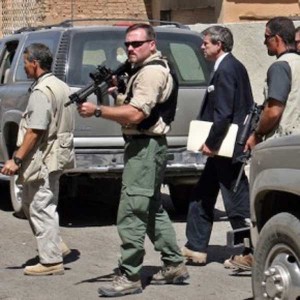 For decades it was a matter of fact for the public that the right to fight was solely based on the decision of the government. The concept of mercenaries were certainly not new in the modern warfare and neither their role in pre modern history, although experts say that the rise of Private Military Companies (PMC’s) officially entered the modern warfare in the 90s. Ever since nations began boiling internally, civil unrest and internal conflicts grew, events like these created a market for the PMC’s. PMC’s have no political affiliation, they are not concerned about the political fallout resulting in instability and chaos, they are not concerned about the actors, they do whatever their client wishes them to do, without encumbrances’ or political restraints. We can say that PMC’s provide security for a hefty price, security for business? Absolutely. However PMC’s do not involve in direct conflict, their goals are to provide personnel security to HVT’s (High Value Targets) or winning the war through their weapons, equipment and training.

The issue arising from above is the clear, the question of regulating PMC’s and monitoring their activities. Should there be norms for regulation? And if so, what and by whom? These questions are a major concern for the United Nations today, especially the Security Council. Undoubtedly PMC’s are a great asset to companies, organizations, governments and even to the UN, since they are less costly as compared to the cost of deploying regular troops and sometimes they offer best support in civil missions. But aspects like these does not make them a threat, there are no regulation, sometimes they are out of control and may compromise the mission as a whole. “They are bunch of kids with big guns”.

Each topic has a different side and yes even this delicate topic had once, and different nations have different opinions and concerns regarding the use and influence of PMCs. Regulation of PMC’s is one topic, no nation have unanimously ever agreed.

The article will present different phases of PMC’s, provide a definition of PMCs followed by exemplary companies and states. Secondly, this article will also examine existing UN conventions and resolutions so as to explain the current stand of the UN and the measures and actions taken by this international organization so far. An attempt to understand the legitimacy of PMC’s with respect to the sovereignty of a state would be arrived at. Fundamentalist Non-State actors fighting wars or proxy wars will not be covered in this category.

Fundamentalist Non-State actors fighting wars or proxy wars will not be covered in this category.

One can understand Private Military Companies (PMC’s) as a commercial company selling security and support services that provides armed security followed by military guidance and support weapons, with operational facility in the global world. They constitute the privatisation of the military and support staffs, which has been expanding in the world today. The end of the cold war brought new beginnings in the militarization of the private sector, opposing the most secured “state centric model of security”. Today there are very few nations operating without private military support, military expertise especially during the time of war and private security measures for “high valued” government officials.

UN and the PMC’s

The 1989 International Convention against the Recruitment, Use, Financing and Training of Mercenaries (A/RES/ 44/34), is also known as the “United Nations Mercenary Convention”. This convention bans all forms of mercenariesm. Although it has been ratified by only 33 nations (no P5 nations ratified it), the convention came into working in 2001. Article 1 of the resolution defines mercenaries as follows:

“A mercenary is any person who:

To maintain its working efficiency, the United Nations expanded its operations, not only working together with NGOs, but began working with PMCs. The United Nations is one of the active customers of PMC’s…

Those nations hiring PMC’s justify by denying any actions taken by the PMC’s in the conflict as “PMC’s play a very defensive role” and PMC’s hired by them play no role in the conflict or harm the civilians in any capacity. The role of PMC’s have been clearly explained in the Article 47 of Additional Protocol I of 1977 to the 1949 Geneva Conventions. Although the Additional Protocol only states that mercenaries cannot be a prisoner of war, however the 1989 convention bans mercenariesm and adds that such military enforced policies showcase monopoly and under no circumstance it is considered legal. The Convention on the Elimination of Mercenariesm in Africa, was adopted by the predecessor of the African Union, the Organization of African Unity in Libreville on 3 July 1977, also shares similar accounts of interest in mercenariesm. As per the account of the declaration adopted by the Organization of African Unity, promoting mercenariesm is a crime and is punishable under the law.

To maintain its working efficiency, the United Nations expanded its operations, not only working together with NGOs, but began working with PMCs. The United Nations is one of the active customers of PMC’s, as it hires guard services, residential security and support for humanitarian activities. This step of the UN is politically and socially been challenged by many security experts in the past, and many continue to do so even today. On numerous accounts questions on the accounts of “legitimacy, impartiality and legality” have been asked by many experts. In 2005, the Working Group of the UN conducted a joint study with the United Nations Human Rights Council on the legitimacy, threats, violations of human rights and extortions carried out by Private Military Contractors in the past. The study submitted their report to an expert bench during the session of the General Assembly of the 2014.

The inability to control conflict was the reason the concept of mercenary was born. Also western forces are more or less trained to control civil wars, PMCs aim to fill this security gap.

The Working Group not only screened past issues with respect to Private Military Contractors, but also created guidelines for hiring new PMC groups just in case the UN ever needed. Poor accountability, transparency and repeated violation of human rights was noted by the Working Group in their report to the Human Rights Council (A/HRC/15/25). The Working group also threw some light on the “regulatory gap” between the UN and its hiring policy for the PMC’s. Regulation is a must when it comes to hiring and utilizing PMC’s and their services during any conflict. The Working group also focussed on the point that the terminology “mercenary” was not applicable to many of the employees of the PMCs. To summarise the Working Group was “concerned about the extensive outsourcing of military and security functions and the growing role of PMCs in armed conflicts, post-conflict and low-intensity armed conflict situations recommends prohibiting the outsourcing of inherently state functions to PMSCs in accordance with the principle of the state monopoly on the legitimate use of force”.

Regulating the Privatization of Armed Forces

While addressing the need to use PMC’s, “sovereignty” should be addressed first, since international law clearly states that during a war, the monopoly should be of the nation fighting it.

The inability to control conflict was the reason the concept of mercenary was born. Also western forces are more or less trained to control civil wars, PMCs aim to fill this security gap.

It is also important to understand that PMC’s originate from the US, the United Kingdom and South Africa, and from sometimes France and Israel. The risk concerning PMC’s remains unfold, especially when they are originating from the P5 nations. The PMC’s are very unrestricted and are given open access in a nation’s political and social state, even though they are hired for a short period of time, their interest soon gives them an edge in the conflict, making the host nation hostage. PMC’s do not work diplomatically, but they are very aggressive in implementing their own rules and regulation which is quite the contrary UN Peacekeepers works. Irrespective to UN Peacekeeping missions in conflict zones, there are no designated areas of operations, they work where they feel like, without control, without proper supervision.

With continuous wars on terror, the role of PMC’s are getting more into play. As a result the gaps and overlaps in a nation’s security has increased and nations are on the verge of becoming dependent on foreign security and armoured services.

It is also true that deploying PMC’s are less costly than deploying a regular army. PMC’s are able to blend in the conflict faster, with lesser human losses, making them more goal oriented than the regular army. These might be reasons granting legitimacy to the use of PMCs.

The first problem that comes with the hiring PMC’s is their “accountability”. Observing and tracking PMC’s movements have been proven difficult in the past, transparency and accountability is absent, as already noted by the Working Group on the use of mercenaries. This issue comes into light especially when there is no one to take the responsibility of their actions – the contractor state, the company or an organization in the middle. A need for regulation is expressed in this concern in the report A/HRC/15/25. The state can monitor and control the actions of their forces, but managing PMC’s is impossible.

There is a huge difference between the PMC interventions and UN interventions. The UN missions are sponsored by the donors and state bear full responsibility of their planning’s and support, PMC’s on the other hand demand payment in support of their services. The risk of giving a (foreign) company leverage over a government and its affairs emerges, which in its repercussions might be highly problematic.

It is very true that globalization will not spare the privatization of armed forces, it will rather create insecurity and chaos. With continuous wars on terror, the role of PMC’s are getting more into play. As a result the gaps and overlaps in a nation’s security has increased and nations are on the verge of becoming dependent on foreign security and armoured services.

The legitimacy of the PMC’s will always be questioned, especially when the role of guerrilla fighters and rebel in the areas are stronger than the vulnerable state government. This will then increase the threats against humanity, the violations of human rights and exploitation of human weakness.

Also, humanitarian organizations have had a bitter experience with the PMC’s in the past, the call for establishing guidelines for PMC’s, and contracting parties should be taken into account. These guidelines will mention instructions how and under what conditions a state should employ PMCs and what trainings should be given to them.

2 thoughts on “The Growing Influence of Private Military Companies”