The First Kashmir War and Lessons for India 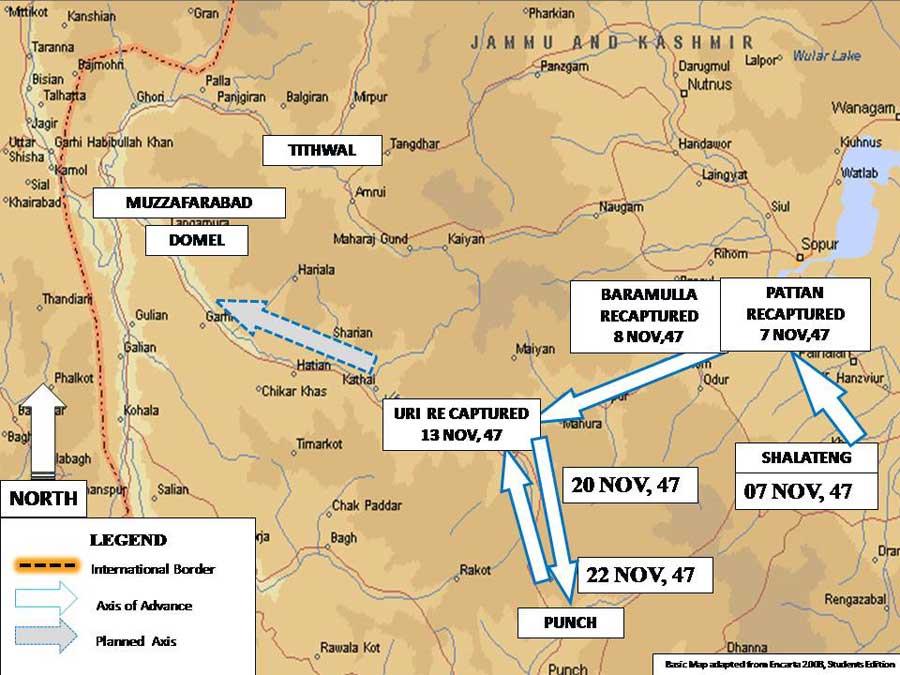 Mr C Dasgupta’s acerbic comment that the first Kashmir War was ‘moderated’ and ‘finessed’ is an unsettling truth and a reflection on how the longest war Independent India has ever fought, ran its turbulent course; from operational planning to modulating its rhythm, the war was choreographed to meet Britain’s imperialistic requirements. English machinations from the drama of accession to the application of forces ensured that the interests of her strategic creation-Pakistan; remain secure. Shadows of history fall long and the effects of the war fought over six decades back continue to bedevil the sub-continent. On one hand, they plunged India and Pakistan on a nihilist path of confrontation and conflict torn Kashmir is testimony of this vitiated legacy. On the other, Pakistan managed to wrest a major strategic advantage by occupying Gilgit-Baltistan, dubbed the ‘cockpit of intrigue’ due to its strategic relevance and adding depth opposite her heartland.

It was only on 24 October, the day India learnt of the invasion the hard way that the failure to take these warnings seriously were regretted.

Round one started with the Indians being caught off guard, despite Nehru’s perceptive reading of the situation and even the warning received from Major OS Kalkat, a Brigade Major at Bannu. This warning was reiterated by Mr. GK Reddy and even by Shiv Saran Das, who as the Deputy Commissioner at Dera Ismail Khan (NWFP) had helped to organise transport for the move of the tribals. These Indians had stumbled onto the closely guarded plot to liberate Kashmir by the force of arms but their warnings failed to galvanise the hierarchy to react in time.

Kalkat’s[1] warning was the most authentic since he had personally read the ‘secret’ instructions, signed by General Frank Messervey, the Chief of the Pakistan Army. These instructions meant only for the eyes of his Commander, Brigadier C P Murray bore the date of 18 August, 1947, and the Operational Order outlined Op Gulmarg with military precision. His Commander who was to leave for England within a short time, withheld the leak to shield his staff officer, however, Pakistani intelligence got wind of the digression and by placing Kalkat under house arrest, affirmed the worst apprehensions of the officer. With the help of friends, he along with his family managed to escape and make their way across Pakistan to warn the Indian hierarchy in New Delhi. He personally briefed Generals Kalwant Singh and Thapar on 18 October and was even taken to the Defence Minister the next day. Unfortunately, his warning was not taken seriously, as what he narrated was not in line with the assessments made by the Intelligence department and simply too theatrical. It was only on 24 October, the day India learnt of the invasion the hard way that the failure to take these warnings seriously were regretted.

Round one erupted when the largest exodus in recorded history had benumbed the sub-continent. A frenzy of murder, mayhem and rape had overtaken North India and outstretched the resources of the new nations; the army being on the forefront. Round one also had the unsettled questions of accession of Junagarh and Hyderabad in the backdrop. It was from this seething cauldron that the mutating armed forces of India were pulled out and baptised in the fire threatening to engulf Kashmir.

…the English were confident that India, even if she could react, would be defeated in terms of time and space and the Kashmir Valley and Gilgit could be liberated well before India could muster her forces.

While 22 October 1947 was the date when the Qabalis crossed Kashmir’s borders at Muzaffarabad, in effect, the war had started much earlier. Nearly a month prior to the invasion, Pakistan had put in place an economic blockade to drive home the point that Pakistan held the key for the survival of Kashmir. To set the stage, she had commenced armed attacks in the opening days of October, targeting Hindus in the Muslim dominated towns of Mirpur, Bhimber, Naushera, Rajauri, Kotli and Punch. These scattered attacks across the frontage of western Kashmir aimed to dissipate the State Forces and denude their capability for concentrated application. Once the liberation of the valley physically started, the English were confident that India, even if she could react, would be defeated in terms of time and space and the Kashmir Valley and Gilgit could be liberated well before India could muster her forces.

Op ‘JAK,’ the Indian plan for rescuing Kashmir from the tribal onslaught started with the landing of the First Battalion of the SIKH Regiment in Srinagar on 27 October, five days after Pakistan had launched Op Gulmarg. Though the alacrity of the Indian response surprised everyone, in effect, it would have made little difference as the launch of the operation by Pakistan on 22 October had given a five days head start and they were expected to plant Pakistan’s flag in Srinagar well in time. To the surprise of the world, the race to Srinagar was eventually won by India; help when it came was from unexpected quarters as the unruly tribesmen under Major Khurshed Husain belayed the trust of their planners.

Mr. Ishtiaq Ahmed[2] writes: “The tribal warriors quickly forgot the mission they were supposed to achieve, and succumbed to a vice deeply rooted in their culture and history – looting, pillaging and raping.”Major General Kuldip Singh Bajwa elaborates on the ‘core beliefs’ of the tribals that eventually let Pakistan down. As per him, these were ‘Zan’ or Women, ‘Zar’ for money and ‘Zamin’ for land.[3] The tribals had been promised plunder as their reward and having found this easily, disregarded their mission. On the other hand, the race was won by the alacrity shown by the Indians entrusted with the impossible task of ‘rescuing’ the valley from the fate Mirpur, Bagh, Rawlakot, Muzzaffarabad, Domel, Uri and Baramulla had already suffered.

…in battle, when the situation is unclear, there is a requirement is to seize the initiative.

The tide turned after the first encounter with the raiders on the outskirts of Srinagar and within a week, the raiders had been thrown back to Uri. In Gilgit and West Kashmir, the Indians were taken in by well-entrenched Trojans as a result of which the region of Gilgit-Baltistan were lost without any meaningful response from India. The Generals not only ensured that no reinforcements were sent to Skardu, but they also denied withdrawal to the more defensible Kargil. This kept both key communication centres weak; ready to be taken when the time came. It was fortunate that further forays into Ladakh were foiled by the Lahaulis of 2 DOGRA under Captain Prithi Chand,[4] and the indomitable Nubras under Chewang Renchin. Between these warriors, Leh and her fabled monasteries were spared the sacking, though in the process, Baltistan was lost, despite the heroic defence of Skardu by the never say die, Sher Jung Thapa.

Operations till 7 November included the rear-guard actions by Brigadier Rajinder Singh’s motley force, 1 SIKH under Colonel Rai and the sharp engagement by Som Nath at Badgam. Between them, they had delayed the enemy and given India precious time to build up. In addition, the Air Force, after the extraordinary effort of the air bridge, had started operating fighters from Srinagar and light bombers from Amritsar. Individual courage apart, important lessons from the operations that culminated at Shalateng are covered:

The Battle of Shalateng was planned jointly and despite the change of command five times in eleven days, the actions were choreographed admirably.

Initiative. This was a quality amply displayed by the Indians. Quick seizing of the operational situation, going out of the way to seek contact and creating situations rather than waiting for them to develop, were qualities exhibited by Brigadier Rajinder Singh, Colonel Rai and Major Som Nath. While these officers have become legends, the common strain was that they understood their mission and created situations for the enemy, despite starting with a handicap. Both Rajinder Singh and Rai could well have interpreted their orders to dig in and wait for the enemy, but both chose otherwise. Had they not been pro-active, the story of Kashmir would have been different. This proves the dictum that in battle, when the situation is unclear, there is a requirement is to seize the initiative. It devolves on a military leader to look beyond the immediate orders and take actions to further the higher commander’s aim. That is what these officers did and wrote history for their country.

Synergy of Effort. The combined operations stood out as one of the finest example of synergised application of combat power benchmarked by the flawless execution of the Air Bridge. Not only was this apparent between the Air Force and the Army, but also with the civil aviation and the state forces. It was also seen in the way NC volunteers took control of the law and order situation in the valley. The Battle of Shalateng was planned jointly and despite the change of command five times in eleven days,[5] the actions were choreographed admirably. When the tribals reached Shalateng, they ran head long into the patrol of 7 CAV and the company of 4 KUMAON who skilfully fell back to the positions of 1 SIKH deployed on the axis from Pattan. In the meantime, 1 KUMAON and armoured cars were ready to swoop in from the south to finish the enemy. David’s cars by taking a difficult route moved up till he was in a classic position to engage the enemy from the flanks and rear. The combined onslaught along with fighter aircraft overhead, proved to be battle winning.

Failure to interdict Enemy Lines of Communications. The RIAF was restrained from interdicting the bridges at Kohala and Domel by the collective wisdom of the Indian hierarchy at Delhi. Presumably, the intent was to prevent escalation, hence, while this was condonable in the opening stages, once the magnitude of the transgression was uncovered, there was little to justify such restraint for targets well within Kashmir. It is quixotic that the advice of the Air Chief Elmhirst could convince Pundit Nehru who had specifically demanded the destruction of the bridges which were the only links with Pakistan.