The F-16 vs Mig-21 Bison: More Questions than Answers 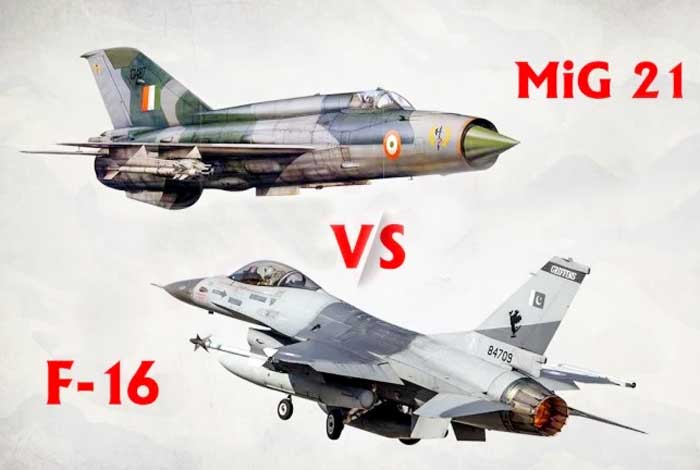 The analysis of the much-reported dogfight between the IAF and the PAF on 27th February as a fall-out of the Balakot strike the previous morning has thrown up a number of theories, conjectures and scenarios particularly with regard to the brief and sharp dogfight between an F-16 against a vintage, though upgraded, MiG-21 Bison. Claims and counter-claims have flown thick and fast, perhaps as thick and fast as a modern day aerial engagement between high-speed jets in some numbers.

Very little has been confirmed by the officials concerned on both sides. This is except for the claim of an F-16 shot down by India by the Defence Minister, Ms Sitharaman, herself at the India Today Conclave on 12th March. From the Pakistani side, the Prime Minister, Imran Khan, initially claimed two Indian aircraft shot down, with two pilots in their captivity. Later, this turned out to be just one aircraft and one pilot, the latest hero of India, Wing Commander Abhinadan Varthaman who was soon on social media and TV. No further explanation has emerged from Pakistan on Imran’s claim of the second aircraft and the mysterious second pilot.

However, just as I was writing this piece, I received the pictures of the damaged but unfired missiles reportedly carried on Abhinandan’s aircraft, as going around in Pakistani media. From the Indian side, very little has been put out in the public domain, except pieces of an AMRAAM which can only be fired from the F-16s on Pakistani inventory thus confirming the use of the F-16 in this engagement but little to confirm the downing of the F-16. Mr Arun Jaitley reiterated the claim and chase of the F-16 a couple of days later in an interview on CNN News 18 but supported it with the story about the retired Pakistani Air Marshal’s son being the F-16 pilot. That story had been earlier negated on social media.

At the same time, Mr Jaitley rightly commented on the issue of space-filler information versus scientific evidence in the media while stating that our intelligence and imagery cannot be put out in public domain for obvious reasons. However, in my opinion, that should not prevent us from confirming such an important kill with some hard facts that do not compromise national security.

To be sure, this was the first such dogfight between the two air forces since the 1971 war, over 47 years earlier. Thus, this engagement was bound to generate a lot of interest and comment worldwide to push home pet theories, glorify one side or denounce the other but very few to genuinely derive some valuable lessons.

The first western report on 3rd March raised doubts on India’s vintage military hardware, perhaps erroneously by criticizing the use of the MiG-21s in this encounter[1] while a later one by Joseph Trevithick rubbished the entire claim of the MiG-21 Bison shooting down the Pakistani F-16 Viper, in some pretty strong language.[2]

Fortunately, the latter article does list out the capabilities of the upgraded MiG-21, called the Bison, and summarizes its 4th generation capabilities in avionics and weapons after the upgrade, including the R-77 BVR & R-73 close combat missiles, the helmet mounted sight and, very importantly, in the modern air battle with both sides having a BVR capability, the carriage of a self-protection electronic warfare pod, the Israeli ELTA 8222. Such capabilities give the MiG-21 Bison the ability to get a shot at even more modern aircraft like the F-15 Eagle, as shown in various Cope India exercises with the US, particularly when operated in a numerically stronger package with some support from more advanced aircraft like the Su-30, Mirage-2000 and MiG-29s in our inventory. However, while admitting such capabilities of the MiG-21 Bison, the author does question the absence of hard facts supporting our claim on the F-16.

Certainly, this was not a one-on-one fight between the two aircraft so the question is not about which aircraft is superior but which air force used its resources in a more effective manner.

Be that as it may, the loss of one of our MiG-21 Bison in this encounter raises certain questions. Quite obviously, even knowledgeable outsiders cannot answer these questions without full information on the manner in which this encounter took place. Again, very obviously, we should not even expect such full information by either of the air forces. However, it is hoped that these issues or questions are being addressed by the IAF in order to draw the right lessons for the future.

Having carried out the pre-emptive strike at Balakot on 26 February, it must be assumed that the IAF was fully prepared for any retaliatory action by the PAF. Thereafter, the first question obviously is whether we used adequate numbers of MiG-21 Bisons with a mix of the other more modern 4th generation fighters like the Su-30MKI and MiG-29s to ensure the requisite numerical and qualitative superiority on the intruding force to not just deter but shoot down maximum number of enemy aircraft. Just imagine the situation today if we had paraded 8 or more Pakistani pilots in our captivity as against one of ours in their captivity.

Some reports suggest that while the Pakistanis retaliated with 24 or 12 aircraft, we launched just 6 MiG-21s with another 4 Su-30s. Surely with our surveillance systems on full alert, we could have launched a larger number of fighters to overwhelm the intruders.

Since an AMRAAM BVR missile reportedly shot down the MiG-21 from an F-16, the second question arises on whether Wing Commander Abhinandan’s aircraft was carrying the ELTA EW pod to thwart such a missile attack. If it indeed did carry such a pod, did the pod fail to function or is it now inadequate to counter the threats of today? A capable EW and counter-measure systems are absolutely essential elements for a fighter aircraft in an air engagement or a dogfight in today’s environment. A related issue is the limited number of hard points on the MiG-21 to carry fuel, weapons or other stores like this EW pod.

An internal EW system, therefore, makes a lot of sense to free up the external hard points for fuel or weapons. As the Director of the MiG-21 Bis Upgrade till contract signing in 1996, I had tried hard for an internal system but for reasons beyond my control, we had to settle for an external EW pod which lost us a precious external station. However, that is another story for another time. Nevertheless, it does need to be said that if we had an internal EW system on the Bison, perhaps the possibility of the pod not having been carried in this engagement would not even have arisen.

Another issue worth consideration internally by the IAF is on the relative positioning and presence of other aircraft in this interceptor group. Where were the other formation members when Wing Commander Abhinandan was engaging or chasing the F-16 and what did they do and observe?

Surely, the radio calls between them and from/to the situation controller would prove something towards our claim of downing the F-16. Also, if the MiG-21 was shot down immediately after the F-16, surely the F-16 wreckage should also be close to where the MiG-21 came down just a few kilometers across the LoC. If that be so, why is it that we have not been able to acquire the imagery of that crash site/wreckage? Also, why didn’t Abhinandan launch the longer range R-77 missile instead of choosing to chase the F-16 for an R-73 CCM launch, as has been reported.

Lastly, the training in the IAF had also taught us that a good fighter pilot never leaves behind a formation member and even stays with the downed teammate till he is rescued, if fuel and other conditions permit. So, did his formation members stay with him at least till his MiG-21 was shot at and couldn’t they together threaten the attacking aircraft?

I am certain the IAF is pondering over these issues based on the facts known only to it and, hopefully someday, we will hear the whole story, perhaps in a box-office movie, without politicization of this entire episode.