The Entry of Global Jihad through South India 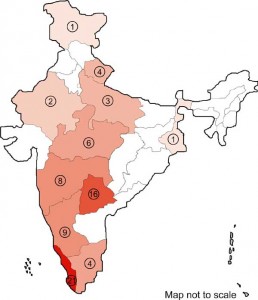 Of the 75 persons arrested, 21 were arrested from Kerala, 16 from Telangana, 9 from Karnataka, 8 from Maharashtra, 6 from Madhya Pradesh, 4 from Uttarakhand, 3 from Uttar Pradesh, 2 from Rajasthan, 4 from Tamil Nadu and one each from Jammu and Kashmir and West Bengal.

In a statement in Rajya Sabha, the Minister for State for Home, Mr Hansraj Ahir said that the NIA and the state police of various states have so far arrested 75 people for links with the Islamic State. 50 of them belong to the southern states of India. Thus, they constitute more than 65 percent. The spread of these individuals allured by Islamic State brand of jihadism is given on the map.

The radicalization of Muslim youth in southern part of the country is not a new phenomenon. It began in the mid-70s, impelled by the petro-dollars of the Gulf countries. Radical Sunni Islam and Wahabization became the new instruments to negate the growing influence of Shiite Iran after the Revolution in 1979. It was during this period that large numbers of Muslims from South India, particularly Kerala, found employment in the Gulf countries. The same phenomenon was true for Pakistan as well. More than eight million Pakistanis were employed in the Middle-East, sending remittances worth $ 20 billion.

Pan-Islam and global jihad ideology incubated in Gulf made its entry into India through the Southern door, much before it made itself felt in the Kashmir Valley.

In India, the most prominent South Indian state to benefit from the gulf oil economy boom was Kerala. At one time it had 3.5 million work force employed in the region, which by 2016 came down to 2.24 million due to slide in the gulf economy. Nevertheless, the remittances sent by them, $ 7.5 billion approximately, sustained the state economically in many ways. As per 2003 figures, remittances to Kerala were 1.74 times the revenue receipts, 1.8 times the annual expenditure of Kerala government, and 15 to 18 times the size of export of cashew and marine products. It is believed that one out of every five households in Kerala had someone employed in the Gulf.

Naturally, this sort of overseas employment and economic phenomenon is not without sociological consequences. The Gulf phenomenon impacted the Hindus and Christians on social and economic planes, but dangerously, the Muslims were also impacted by the growth of Wahhabization and Pan-Islam, which was unleashed by the Gulf countries to checkmate Iran and the Shias.

The oil rich Gulf states became the major provider of employment to Pakistanis. Consequently, the Pakistani establishment both under Bhutto and Zia, particularly the latter, came under the influence of oil rich Gulf states and encouraged radicalization of its citizens employed in the Gulf countries. Post 1979 Iranian Revolution and Soviet invasion of Afghanistan, Pakistan got an opportunity to develop formidable ties with Saudi Arabia. It manifested in a strong Sunni-Jihadist coalition forged under the patronage of the Western countries. The entire Sunni-Jihadist enterprise was financed by the Gulf and Weaponized by the West.

Many Indian Muslims from the South working in the Gulf were seduced by this growing Sunni-Jihadist enterprise. This enterprise got further impetus after the withdrawal of Soviet forces from Afghanistan. Pan-Islam and global jihad ideology incubated in Gulf made its entry into India through the Southern door, much before it made itself felt in the Kashmir Valley.

The jihadist link between Pakistan-Gulf-Kerala became increasingly elaborate and sophisticated. Today there is no dearth of global jihadis in southern states of India. The disease obviously has spread from Kerala to other southern states.

Meanwhile, Pakistan had emerged as the epicenter or the industry for jihadists. General Zia began to ensure that the Sub-Continental variety of Islam was buried and the Wahhabi Islam was embraced. The largest mosque in Pakistan, i.e., King Faisal Mosque was built with Saudi money. The Bedouin Arab tent architecture of this mosque was not incidental but inspired. It meant jettisoning of Indo-Persian variety of Islam as prevalent in the Sub-Continent. Never a part of the so-called ‘Ganga-Jamuna tehzeeb’ strand of Indian Islam, some Muslims of southern part of India found the Wahhabi variety of Global Islam very attractive.

General Zia as the key figure of Sunni-jihadist enterprise became a rallying figure for the pan-Islamists and global jihadis in the Sub-Continent. General Zia is buried in the premises of King Faisal mosque. This mosque in Islamabad is a very important national symbol and around this national symbol, several seminaries have mushroomed around it. Islamabad today boasts of more than 400 seminaries, which are engaged in producing global jihadis. Concomitantly, south India, specially Kerala witnessed a boom in Saudi funded mosques, educational institutions and charitable organisations. Today the IT capital of India, Bengaluru boasts of more than three dozen Wahabi/Salafi mosques. This, as per the Salafi website entailed a fierce contest, even physical from other Islamic groups.

The jihadist link between Pakistan-Gulf-Kerala became increasingly elaborate and sophisticated. Today there is no dearth of global jihadis in southern states of India. The disease obviously has spread from Kerala to other southern states.

The jihadi to have reached the highest position in the hierarchy of the Islamic State is Shafi Armar, who is a resident of Bhatkal in Karnataka. He has been declared a global militant by the US. Earlier he was with the Indian Mujahideen. Given the pan-Islam narrative in the southern states, this transition is not difficult to comprehend.

As per a report, 23 Keralites have joined the Islamic State in Afghanistan. Their leader Abdul Rashid Abdulla, in an interview has said: “Islamic State is growing faster than you think… Islam spread by the sword… Education in India teaches you to respect nation-state and other religions, these are anti-Islamic… A job helps a secular democratic nation and is therefore un-Islamic… Here in Khorasan we have Pakistanis, Tajiks, Uzbeks, Arabs and Indians – all of us live like brothers… Thanks to internet… a new world has opened to the youth.”

Since 2006, an intense wave of jihadi terror is being witnessed in southern parts of India. The perpetrator of this terror is ‘Popular Front of India’ (PFI). There is no atrocity in the dictionary of terror that this beastly jihadi outfit has not committed.

Another jihadi group, which has been active in southern part of India is the Base Movement, which came into existence in January 2015 at Madurai in Tamil Nadu. This group is affiliated to the Al-Qaeda.

It is pertinent to mention here that the Al-Qaeda continues to be the umbrella organization of all jihadi groups rooted in the Wahabi / Salafi philosophy. It includes outfits like Haqqani group, Tehrik-e-Taliban Pakistan (TTP), Lashkar-e-Toiba (LeT), Jaish-e-Mohammad (JeM), Lashkar-e-Jhangvi (LeJ), Jundulah, JMB, Al-Nusra, Boko-Haram etc. Hafiz Saeed was put in under preventive detention on 17 December 2008, this was a week before the US Security Council designated Jamat-ul-Dawa (JuD), the parent organization of LeT as an associate of Al-Qaeda.

This new south India based terror group ‘Base Movement’ has carried out five blasts in different Court premises in southern part of India. These, as per the admission of its members were carried out in revenge against so-called victimization of Muslims in rest of India. The first bomb attack on 15-June-2016 was carried out in Kollam Court against the encounter killing of Ishrat Jahan. The second attack was carried on 01-August-2016 in the Mysore Court because of hanging of Yakub Menon and killing of eight terrorists of SIMI in Madhya Pradesh. The third attack was in Nellore Court on 12-September-2016 following the killing of Burhan Wani.

Since 2006, an intense wave of jihadi terror is being witnessed in southern parts of India. The perpetrator of this terror is ‘Popular Front of India’ (PFI). There is no atrocity in the dictionary of terror that this beastly jihadi outfit has not committed. This organization came into being in 2006 after merger of three different jihadi terror organizations, i.e. National Development Front (NDF), Karnataka Forum for Dignity (KFD), Manitha Neethi Pasarai (MNP) in Tamil Nadu. The NDF in 2003 had killed eight Hindu fishermen and 65 of its cadres were subsequently awarded like imprisonment. The KFD murdered two boys in Mysore because their parents failed to pay a ransom of Rs. five crores. In 2011, PFI activists chopped hands of Kerala professor for religious reasons. This bestial decision was taken from the Taliban model court of PFI. In 2012, the PFI in concert with global jihadi organization HUJI as also Pakistan ISI, generated 60 million messages in one day to cause mass exodus of 30,000 people from Bengaluru, Pune and Chennai. The PFI as per intelligence agencies had role in 2011 Mumbai bombings, 2012 Pune Bombings and 2013 Hydrabad blasts.

An India Today sting operation also reveals the forced religious conversions of Indian girls carried out by the PFI.

Mr. Binay Kumar Singh has depicted the growth of the PFI by a map given below:- 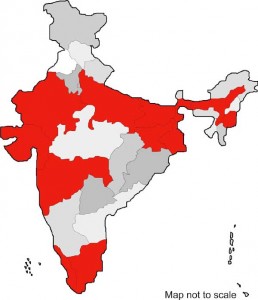 An article in Sri Lanka Guardian in 2010 aptly titled “INDIA: Jihad’s southern outpost” had alerted India about the jihadi menace in south India. The author VR Jayaraj wrote: “…thinking that God’s own country had an impregnable shell of social peace and religious harmony. This myth got shattered in October 2008 when security forces killed four LeT recruits from Kerala in Kupwara, Kashmir, in an encounter while they were trying to cross over to Pakistan, obviously for advanced weapons and ideological training in the terror academies run by ISI-backed groups.”

He further wrote: “…the ISI has been operating on the ground in Kerala through infiltrators much before the recruitment into LeT of the four Malayalees killed in Kashmir in 2008. A big instance of ISI infiltration into Kerala had come to light after the arrest in Mysore of Muhammad Fahd (30), a Pakistani national with Kerala roots and an Al-Badr coordinator, in October 2006…”.

Indians must rise and act in unison before the jihadi deluge exacerbated by Maoist and other anti-national tributaries consumes them.

The cadre strength of the PFI has doubled in the last decade i.e. from 45000 in 2009 to over 1,20000. So is the boost of cadres in other jihadi groups based in south India like Tamil Nadu Tauheed Jamat and Kerala Nadwathul Mujahideen. Zakir Naik continues to draw large number of followers. His Facebook has 1.56 crore likes, feeding substantially on south Indian youth.

What appeared to be a ‘breach’ by global jihadi in south India in 2006 is now threatening to blow the Vindhyan dam. Indians must rise and act in unison before the jihadi deluge exacerbated by Maoist and other anti-national tributaries consumes them.

This ‘breach to dam burst’ story has many parallels in history, and India in the past has dearly paid for it. Waiting for the threat to waste itself or run its course for political considerations, is not a solution. Moreover, the genius that south India produced was due to the fact that the Vijaya Nagar Empire bolstered by the Vindhya ranges held the jihadis for four hundred years, let not the beasts do the reverse now.