Naval Detachments. In the first instance, twelve detachments were set up along the coast between Jakhau and Vengurla. The detachments consisted of minimum number of naval personnel supported, whenever possible, by either the customs or the police. Each of the detachments were provided with three trawlers for patrolling, fitted with LMG.

The deployment of trawlers for surveillance of close coastal areas was necessitated because ships could not operate in shallow waters due to draught constraint. Moreover, IN/CG Ships were not always available on account of their deployment for other tasks and exercises.

The hired trawlers also provided an element of camouflage and concealment as they easily passed off as normal trawlers engaged in routine fishing activity and were able to monitor all activities in the surrounding areas without arousing suspicion. The ocean going trawlers were hired from Fisheries Survey of India, and the coastal trawlers from trade.

The naval detachments were set up in Gujarat and Maharastra and placed under NOIC (Saurashtra) and FOMA respectively:-

ONGC Patrol. The trawlers on patrol within the oil fields, operating under the control of FODAG were also warned to be vigilant against vessels likely to be involved in smuggling of arms and explosives.

Co-ordination Committees. State Governments had been instructed to convene Coordination Meetings at the State capital level chaired by the Chief Secretary and attended by reps of the Civil administration, Police, Customs, DRI, Central Police Force, IB, Ports, Navy and Coast Guard. District level meetings were also convened with representatives of the above agencies. These coordination meetings provided intelligence, communication and logistics support to the operation. 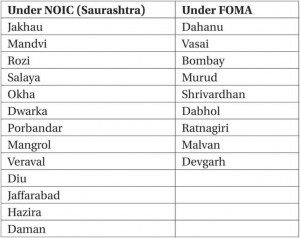 With the onset of monsoons, the joint coastal patrol (JCP) by Navy, Police and Customs personnel was usually suspended by early June every year. The Naval Detachments located at Dahanu, Vasai, Murud, Srivardhan, Dabhol, Ratnagiri and Deogarh were manned during the monsoon also.8Sagar Rakshak Dal. To involve the coastal community in monitoring activities, Sagar Rakshak Dal was implemented in July 1999. The Navy was instru­mental in the implementation of Sagar Rakshak Dal in 263 coastal villages under the supervision of Maharashtra Police. The aim of the scheme was to en­hance the ongoing coastal security surveil­lance along the Maharashtra coast. A na­val training team comprising of two Marathi speaking senior sailors was con­stituted for training more than 1000 SRD (Sagar Rakshak Dal) members be­tween July and August, 1999 in the five coastal districts.

Much later, in 2005, Mr. MK Dhar, a former Joint Director of India’s Intelligence Bureau provided insights on why, despite the resources deployed for surveillance, the exchange of information that prevailed during Operation SWAN was so inadequate.9

“Police investigations into the Bombay serial bomb blasts and subsequent events brought out a naked truth: the prime intelligence agencies of the country did not have any idea whatsoever about the coastline of India “” from Gujarat to West Bengal, which enjoined the key security regions in Pakistan, the Maldives, Sri Lanka and Bangladesh.

“Police investigations into the Bombay serial bomb blasts and subsequent events brought out a naked truth: the prime intelligence agencies of the country did not have any idea whatsoever about the coastline of India — from Gujarat to West Bengal, which enjoined the key security regions in Pakistan, the Maldives, Sri Lanka and Bangladesh. The coastline was open to threats from the Arabian Sea, the Indian Ocean and to the Bay of Bengal.

“The Coast Guard in its present form protects the territorial waters of the nation and prevents smuggling and poaching activities. It, however, paid more attention to the blue waters. It did not maintain regular vigil on the shallow waters and the minor ports and unspecified shallow landing sites. It was not designed to carry out the sieve work to filter the flourishing dhow traffic between India, Pakistan and the Gulf destinations.

“We began a task of carrying out a systematic study of the major and minor ports along the entire coastline, recorded and unrecorded landing sites, creeks and inlets. Simultaneous studies of the population and political complexities were taken up. Several smuggling cartels and criminal gangs were identified and modus operandi of transportation mechanism between the coastal areas and hinterland niches of the smugglers, hawala operators and the underworld gangs were charted out.

“There was initial resistance from the IB units in the coastal states. In most cases they did not have the workforce. More importantly, they had no training in generating maritime intelligence that affected the shallow waters and connected the external inimical forces with the internal saboteurs…”

“By end 1993, the State governments had some rudimentary shallow water patrol system, though it was pitiably inadequate. The Coast Guard too had diverted some attention to the shallow waters for a while. But the police efforts more often ended in futile chase as the slow moving dhows were no match for GPS arid Satellite Communication-fitted fast boats used by the smugglers. Most of the times, the police used rented dhows belonging to fishing magnates. The intricate linkages between the fishing-boat operators and the smugglers often defeated the secrecy part of police operations.

“In fact, there is a case for creation of a Central Coastal Security Force, appropriately equipped with modern boats and communication and surveillance equipment. It should be de-linked from the BSF, the Coast Guard and the state police. It may be mandated to have regular liaison with the Coast Guard and other land based enforcement units. There is an urgent requirement of involving the State police machineries and upgrading their capability to guard the vulnerable pockets along their respective coastlines. I hope the security planners will pay adequate attention to this requirement before another catastrophe hits the nation”.10