Illegal Influx of Refugees. The escalating conflict between the Sri Lankan Army and LTTE added to the problems of the IN/CG patrols. Indian trawlers got involved in illegal ferrying of Sri Lankan Tamil refugees from Talaimannar to Rameshwaram for monetary considerations. To avoid detection, these trawlers beached at night at Rameshwaram and near Adam’s Bridge where the water was shallow and naval boats could not chase them.

With the refugee influx into TN peaking in the mid 90s, the IN and CG patrols were found less effective in controlling the militant ingress along with the refugees since:-

The Kachchativu Problem. Traditionally, fishing by Indian fishermen in the waters of the Palk Bay in and around Kachchativu has remained a bone of contention between India and Sri Lanka for decades. Some fishing boats also indulged in illicit trade and transporting of personnel from Tamil Nadu to across the IMBL. Both these activities led to complaints by Indian fishermen of “harassment by the Sri Lankan Navy”. Despite adequate warnings not to cross the IMBL, the fishermen continued to do so. Consequently, an un-stated task of the Navy and the Coast Guard had been to offer some protection to Indian fishermen.6

Entry of illegal Tamil migrants was accepted on humanitarian grounds.

The Naval detachments played an active role in sensitizing Indian fishermen and educating them to desist from crossing the IMBL till such time an agreement was made between the two nations and fishing rights/permits were given. However, economic compulsions force fishermen from India and Sri Lanka to cross the IMBL to fish in each others’ territory. These attempts were spotted and foiled by the Naval Personnel on armed patrol in the area.

The Intelligence Problem. The lack of adequate intelligence in effectively combating illicit trade, gun-running and smuggling had been brought out by Mr. MK Dhar, Deputy Director of the Intelligence Bureau:-7

The Police presence at the entry points was scanty.

“The pitiable condition of cipher breaking capability was exemplified by challenges posed by the LTTE cipher traffic between the island nation and Tamil Nadu. Some Tamil knowing officers laboured exclusively to decipher the traffic in Tamil. But they were incapable of deciphering alphanumeric, numeric and alphabetic and sign ciphers. Much crucial cipher traffic between the LTTE high command and its safe houses in the Southern Peninsula remained unbroken for months together, being tossed over between the IB, R&AW and the JCB.

The precious life of Rajiv Gandhi could have perhaps been saved had the intelligence organisation acquired the capability of breaking LTTE ciphers. Both the IB and the R&AW did not have powerful first generation computers and required software to break enemy codes.” 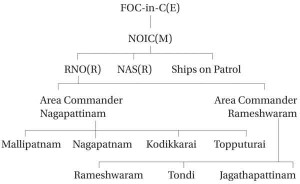 A post of Resident Naval Officer, Ramanathapuram, RNO(R) was created in 1996 and few officers and sailors were positioned under him. The RNO(R) was initially positioned at Ramanathapuram and functioned under NOIC (Chennai).The Palk Bay from Rameshwaram to Nagapattinam was divided into two areas, with each area under the control of Naval Detachment Commanders at Rameshwaram and Nagapattinam. Area Headquarters, Nagapattinam exercises coordination control over Thopputurai, Kodikkarai and Mallipattinam detachments while Area Headquarters, Rameshwaram exercises coordination control over Jagathapattinam and Tondi Detachments.The precious life of Rajiv Gandhi could have perhaps been saved had the intelligence organisation acquired the capability of breaking LTTE ciphers.


The Command structure in 1993 was shown in structure.

Apprehension of MV AHAT. Based on intelligence inputs in early January 1993 on the likely landing of arms and ammunition by an LTTE ship near Mullaitivu on the North East coast of Sri Lanka, ships were deployed to apprehend the contraband carrier. The ship was detected on the night of 13/14 Jan 93 by CGS Vivek approx 400 nm SE of Chennai and was directed to proceed towards Chennai escorted by Kirpan and Vivek.

On 16 January 1993, Ahat was observed to be on fire. While the crew members were recovered from the sea, it is believed that the hardcore LTTE members, including Kittu, perished in the conflagration. The crew were handed over to the police authorities in Visakhapatnam and subsequently to the CBI Special Investigation Team.Operation ‘Grey Hull’ — November 1991. Based on intelligence reports on an attempt to land a consignment of arms and explosives in the northern Sri Lanka coast for the LTTE, coordinated scouting patrols by IN and CG ships and aircraft commenced. On 06 Nov 91, two small vessels were detected and tracked by CG Dornier aircraft 10.5 miles east of Karaikal. Upon being sighted, these vessels acted in a suspicious manner and headed seaward on an easterly course. Warning shots were fired across their bows but the vessels did not heed it and continued on their course.

IL 38 and TU 142 maritime patrol aircraft were deployed from Goa to augment air surveillance. INS Saryu was redeployed from its Palk Bay patrol to intercept and apprehend these vessels. INS Kirpan from Visakhapatnam and SDB T-60 from Chennai with Marine Commandos embarked were sailed to assist Saryu. After a long chase, the vessels were finally intercepted during the night of 07/08 Nov by INS Saryu. At first light, on 08 Nov, the vessels were boarded 180 miles from Chennai and the crew taken into custody.