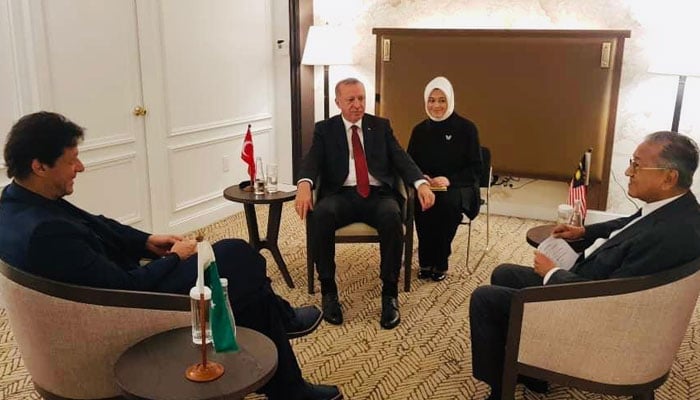 On September 26, 2019, Pakistani Prime Minister hosted a meeting for Turkish President Recep Tayyip Erdogan and Malaysian Prime Minister Mahathir Mohamad on sidelines of the 74th session of the United Nations General Assembly in New York where the trio decided to “jointly start an English language channel dedicated to confronting the challenges posed by Islamophobia and setting the record straight on our great religion – Islam”, as tweeted by Imran that day. Earlier, foreign ministers of Pakistan, Malaysia and Turkey had held their first ministerial trilateral meeting on sidelines of the 14th OIC Summit in Jeddah, Saudi Arabia on May 30, 2019.

Why would Imran Khan, known as ‘Taliban Khan’ before the army propped him up as puppet prime minister of a country whose primary industry is terrorism, bother about Islamophobia and why would he choose to team up with Erdogan and Mahathir? Being in perpetual state of a high and astounding knowledge of geography calling Germany and Japan Pakistan’s neighbours, wonder if Imran considers Turkey and Malaysia also adjoining countries. Pakistan does bank on Turkey and Malaysia, in addition to China, for support on Kashmir and avoid being blacklisted by the Financial Action Task Force (FATF) for which just three votes of member countries suffices. But Turkey and Malaysia have been extending this support to Pakistan already without the trilateral tête-à-tête with Erdogan and Mahathir.

It is perhaps missed out that there is a bigger geopolitical game behind the Pakistan-Turkey-Malaysia nexus under the ruse of Islamophobia and Imran is just a pawn in the game. An indication of this came when Imran stated that “Mahathir Mohamad and Erdogan stand out among Muslim leaders”. Why did Imran say this when every Prime Minister of Pakistan made their first foreign visit to Saudi Arabia to pay obeisance, and even most presidents and army chiefs did so? The orders to Imran obviously came from China and it is on Beijing’s behest that Imran has been working to promote Turkey to lead the Organization of Islamic Countries (OIC) over Saudi Arabia. China’s move looks weird especially after Mohammed bin Salman Al Saud, crown prince of Saudi Arabia did not even criticize China’s treatment of Uighur Muslims during his last visit to Beijing. The real reason why China wants the Pakistan-Turkey-Malaysia ‘dark triangle’ is to use that one common weapon to further its national interests and for world domination – terrorism.

China’s support to Pakistan’s terrorism is well established. China has been arming and supporting terrorism and insurgencies in India, Afghanistan and even Myanmar despite excellent military and economic relations with Myanmar and the China-Myanmar Economic Corridor (CMEC) coming up on the same lines as the CPEC in Pakistan. Chinese support to the United Wa State Army (UWSA), United Liberation Front of Southeast Asia (ULSWSEA) and Arakan Rohingya Salvation Army (ARSA) in Myanmar are prominent examples.

Saudi Arabia has been funding (mostly unofficial?) radical Islamist ideology abroad but Turkey has been actually training and arming terrorists. Turkey under Mustafa Kemal Ataturk was the epitome of secularism with the army officially tasked to maintain its secular fabric. There were instances when the army even appeared on the scene with tanks to break up radical congregations. Erdogan, who dreams to re-establish the erstwhile Ottoman Empire with himself as the Caliph, has changed all that. The attempted coup to maintain secularism in Turkey was ruthlessly stamped out.

The initial training and arming of the Islamic State in Iraq and Syria (ISIS)/Islamic State in Iraq and the Levant (ISIL) was done in Turkey under British mercenary instructors with full knowledge of Pentagon, CIA and Britain’s MI-5. At the height of ISIS control in Iraq-Syria, ISIS was smuggling out oil to the tune of US$ 3 billion daily every day despite a US-led 40-nation coalition controlling the skies till Russian President Vladimir Putin exposed these oil convoys and started bombing them. Terrorists from world over are  routed to Iraq-Syria through Turkey. Similarly, aside from generating terrorism Pakistan remains the conduit in Asia for sending terrorists to Turkey and for inducting ISIS/Islamic State of Khorasan Province (IISKP) into Afghanistan.

The 26th report of the United Nations’ Analytical Support and Sanctions Monitoring Team regarding ISIL, al-Qaeda and associated individuals and entities submitted to the UN Security Council (UNSC) in July 2020 states that Turkey continues to be an important transit hub for foreign terrorists and jihadists and a safe haven for ISIS and ISIL affiliated groups across the region. The report underlines that terrorist groups operating under the umbrella of Taliban and aligning with ISIL-K in Afghanistan are planning to reach Turkey to join the local pro-ISIL Central Asian Diaspora. The report has recorded deployment of some 7000-15000 Syrian fighters to Libya through Turkey.

Turkey is a NATO member. Many member countries have been expressing reservation about NATO fulfilling its collective defence obligations under Article 5. In a recent poll held in NATO member countries, 55 percent looked at NATO unfavourably. Interestingly, only 21 percent in Turkey were in favour of NATO with 79 percent against it. On the flip side, NATO too is getting disenchanted with Turkey by its de facto alliance with Russia in aftermath of the Nagorno-Karabakh conflict and Turkey importing the Russian S-400 air defense system. To add to NATO’s disenchantment with Turkey, the US Congress has blocked the supply of American arms and military equipment to Turkey.

According to US State Department’s ‘Country Reports on Terrorism 2019”, Malaysia remains a source, a transit point, and, to a lesser extent, destination country for terrorist groups including ISIS, Abu Sayyaf Group (ASG), al-Qa’ida, and Jemaah Islamiyah.  Suspected ISIS supporters deported from Turkey and individuals linked to ISIS or ASG travelling to southern Philippines use Malaysia as a transit point.  Malaysia is a member of the Global Coalition to Defeat ISIS and has been monitoring, arresting, deporting and trying suspected supporters of terrorist groups. To this end, Malaysia may not be ‘generating’ or sheltering many terrorists but its support to Pakistan at the FATF confirms it is aligned with Pakistani terrorism and radical Islam. China could be having sinister plans for Malaysia, also using the sizeable number of Chinese in Malaysia. Mahathir Mohamad had said that China is not a threat in South China Sea and accused the US for provoking China and trying to turn China’s neighbours against China.

Mahathir Mohamad abruptly resigned as Prime Minister of Malaysia on February 24, 2020 and Muhyiddin bin Haj Muhammad Yassin became the new Prime Minister of Malaysia in March 2020. To that end, the ‘Dark Triangle’ of China-backed Imran’s troika was broken though Mahathir continues to air his radical views. Importantly, Malaysia continues to back Pakistan on international forums like the OIC and FATF. On November 27-28, the 47th Council of Foreign Ministers session of the OIC held in Niamey, Niger passed a resolution against India abrogating Article 370 and 35A of its Constitution. The resolution did not acknowledge Islamabad’s illegal occupation of Pakistan Occupied Kashmir (POK) and continuing genocide against Muslim brethren in Balochistan, Waziristan and Gilgit-Baltistan, aside from institutionalized killings of the Shia community and minorities.

Dynamics of the Muslim world are changing with multiple countries in the Middle East establishing relations with Israel. It is amusing to witness Imran Khan (perhaps inebriated) saying his government is under pressure to recognize Israel. Pakistan’s economic mess is well publicized but Turkey too is fast becoming bankrupt with depletion of foreign exchange reserves, shortage of currency and devaluation.  The lira is depreciating against the dollar almost daily and Turkey’s external debt stands at US$ 100 billion. Moody’s has downgraded Turkey to the values ​​of Uganda and Rwanda – to B2 with. The reason for this is numerous conflicts in which Turkey is bogged down, maintaining terrorist groups in Syria and Libya, and cooling relations with the West creating risks for investors.

What does all this under the tutelage of Beijing mean for India? More and more terror attacks will be attempted to de-stabilize us. Dissent, insurgencies and radical elements will be encouraged, financed, armed and assisted for creating civil unrest, aiming for a perpetual state of civil war here. Turkey and Pakistan have signed new military agreements. Pakistani military is to join Turkey’s Operation ‘Shield of the Mediterranean’ to plunder Greek lands through a permanent presence of surface units and aircraft. Notably, Turkey is preparing its terrorist gangs in Syria to be sent to Kashmir to assist Pakistan.

Turkey-Pakistan military cooperation has been growing at tremendous pace. Both Turkey and Pakistan have sent armed Islamic terrorists to Azerbaijan for fighting Armenia. Azerbaijan’s drone-led assault teams enabled a decisive victory over Armenia in Nagorno-Karabakh. Turkey has developed a variety of drones which it is in the process of supplying to Pakistan. Pakistan-sponsored terrorist attacks against India would see increased use of drones. In addition, we should be prepared for CBRN attacks since morality is not in the lexicon of China and its protégés.

4 thoughts on “The Dark Triangle”