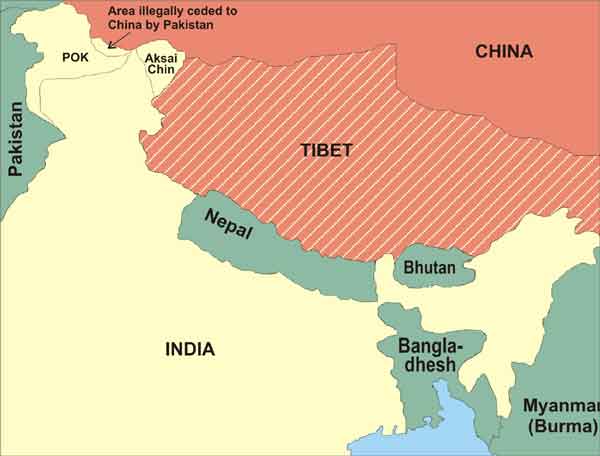 “When there is everything to fear, be unafraid. When without resources, depend on resourcefulness”, – Sun Tsu.

The territorial dispute in the Trans-Himalayan Region is a legacy of the eternal societal dispensation that prevailed over this vast swathe of high altitude desert when this land provided for sustenance to the tribes living on its periphery by way of cattle grazing, mining and transit infrastructure for trans-Himalayan trade. That was the state till the mid-19th Century, when commenced a ‘game’ of ‘power-projection’ to control the geographical properties of the regions of Tibet and East Turkmenistan, vitiating its pristine tranquility. The British India and Russia were the ambitious participants in this power-play, with Tibet-China as the common denominator. It was therefore to be expected that given their cultural compulsions, there would be disputes amongst the contemporary regimes in Tibet, China and India.

Only if Indian leadership had not lost its nerve and continued the state of war, matters would have been different.

The purpose of this paper is to argue that Sino-Indian military confrontation has a hint of  inevitability, unless the cost of armed conflict is rendered unacceptable to the revisionist party. Further, it is reiterated that it could be possible for India, the weaker party, to deter aggression across the Indo-Tibet Border by adaptation to a strategy that is ingenious and free of fixated encumbrances.

The first of the triumvirate, China, is culturally assertive of her ‘superior civilisation’ and an instinctive hegemon. This culture must invariably manifest in any strong regime in Beijing considering as her property ‘by right’, any territory that at any point of time was under any form of control of  any of the empires that reigned from Chang’an, Nanking or Peking’. China’s claim over Tibet, and by default over the Aksai Chin and the Tawang Tract, and by further extrapolation, over the entire Northern Ladakh and Arunachal Pradesh respectively was, in hindsight, a foregone conclusion, which leaders of independent India may have failed to visualise.

Thus with their institutional mastery over stratagems, the first step the Communist China took within a year of seizing state-power was to annex Tibet. Next, in step with steady military build up, China contested the Indo-Tibet Border, then confronted India’s so called ‘Forward Policy’ and finally in 1962, launched an offensive campaign across the McMahon  Line and the Kun Lun Mountains. The following decades saw China continue with build up of strategic infrastructure in Tibet and modernisation of the People’s Liberation Army (PLA). Confidence gained by progress of such ventures  has, since past few years, caused  her, in a repeat of  1950’s,  to intensify her subdued claims over the territories of Arunachal Pradesh and Ladakh more and more assertively. Emboldened assertiveness is also evident in unilateral promulgation of her ‘sovereignty’ over the Aksai Chin, annexation of the Shaksgam Valley and PLA’s nonchalant march into the Pakistan Occupied Kashmir. Expectedly, the charade of her protestations over internal matters in Arunachal Pradesh continues, obviously with an intent to legitimise by incessant repetition, a claim which may be dismissed today but  would become a causes belli some day. In some other politico-diplomatic issues too, China’s assertiveness, bordering at arrogance, is palpable. Indeed, there are seeds of trouble in Sino-Indo relationship.

Role of the central party of the contention, Tibet, is no less significant. Traditionally, Tibet has been as aggressive in conduct of her policies as her military power has permitted, and she has not failed to chastise Chinese as well as Indian intransigence whenever she could. Therefore, it may be expected that Tibet too, if and when the opportune moment comes, may raise territorial questions. That is a lesson of history.

We may thus observe that a confrontationist situation along the Indo-Tibet Border is expected to continue in the foreseeable future. As a corollary, Indian strategists must look to foster a situation which motivates Beijing to seek solutions to her ambitions through political rather than military means.

There is no way India can hope to match China’s military power in the foreseeable future. Further, as evidenced by her past actions, China is unlikely to be dissuaded by the niceties of ‘soft power’ alone. The best India can hope to do therefore is to deter China from engaging in military aggression. And for that, the Indian armed forces have to conceive a strategy that would achieve that end within the means at hand and organise accordingly.

The mandate is daunting. But taking cue from military history and  teachings of great masters of military strategy, it might be possible for the Indian armed forces to devise effective measures to prevent  China from achieving her objective of aggression. Indeed, history is replete with instances when the strong have given wide berth to the weaker adversary, and when yet engaged, the weak have triumphed over the strong (1).  Let us then see as to how can this mission might be accomplished in the Indian context.

We may begin with the most potent weapon of war-fighting : the ‘mind’ – that is a potent integration of intellect and ingenuity with strategic and tactical acumen which empowers military leaders to translate  adversities into advantages.

Imposition of Asymmetry in War-fighting

We are aware that the concept of ‘asymmetry’ is as old as warfare itself. Military commanders down the ages have invested in manipulating the rules of armed engagement in a manner as to generate tactical advantages of their strengths while exploiting the adversary’s limitations. Obviously, it is usual to impose asymmetry upon the opponent by fielding greater numbers of troops and weaponry. However, history teaches us that there are other ingenuous ways – some tangible  (quantitative, technological, logistic) and others intangible (qualitative, tactical, psychological) – to achieve that end (2). The PLA too, faced with prospects of conflict with the all-powerful US military forces on the Taiwan issue, has been propagating her version of asymmetric warfare – she illustrates the idea by a dramatic description : “Assasin’s Mace”.

In view of the PLA’s overwhelming military superiority, the recourse adopted by the Indian armed forces must aim at finding strategic and tactical

…a conflict that fails to conclude with clear victory within a specified time frame will entail a serious setback to China’s standing.

ingenuities to negate the  advantages of such superiority. The point to ponder here is that can such a recourse be in the realm of possibility? The answer is offered by what one of our finest generals had to state.  Writing for the ‘Seminar’ in early 1962,  General Thimmayya  stated :

“I cannot  … envisage India taking on China in an open conflict on its own. China’s present strength … exceeds our resources a hundredfold, …we could not hope to match China in the foreseeable future… .

The country is a mass of mountains right up to the highest ridges of the Himalayas. The passes are practically impossible for over six months except for the men and animals, and that too with difficulty. China is, therefore, deprived of the use of its overwhelming superiority … . This is where we should make full use of our manpower and light equipment … .

If the Chinese attack  us with the intention of recovering territory which they believe to be theirs, we must meet them in those regions with commandos and highly equipped and fast moving infantry. If the Chinese penetrate the Himalayas … , we must be in a position  to take advantage of our superior fire power and manoeuvrability to defeat them and at the same time continue to harass their lines of communications by the use of commandos and guerrillas …”.

Of course, the General was thinking of fighting a war that played  mismatch to PLA’s tactical strengths while permitting exposure of its vulnerabilities (3).

Let us then examine certain core aspects of strategic asymmetry. We may begin with the fundamental factor of war : terrain.

The Terrain : A Relook

We are aware of the much lamented ‘tactical advantages’ enjoyed by the PLA on the open Tibetan Plateau. But we are also conscious of the fact that every item of PLA’s war wherewithal  at the Indo-Tibet frontline must be carted over 1500 kilometers from their logistic hubs at Lhasa and Kashgarh, which in turn must be stocked from central China a further 2000 kilometers distant. The entire logistic connectivity by road, rail, pipeline and air depends upon tenuous lines of communication and static staging yards, all situated over a terrain that is completely open, devoid of local resources and subject to such extreme conditions as it must obtain at 4300 meters of average altitude and sub-zero cold almost throughout the year. Even if China has engineered her transportation capacity  to 24000 tons a day and therefore stated to be able to build up 30 divisions, including formations already in place, in 30 days, and sustain this force in war indefinitely, such theoretical calculations may be valid under ‘test conditions’, in practice this will invariably not be so. No doubt, the whole system of induction and sustenance for PLA’s field forces in war would be ripe for interdiction by air power and special operations.

On Indian side, the terrain South of the 4300 to 5400 meter high Himalayan passes, constricted and snow-bound most of the year, is characterised by razor-sharp ridgelines, steep slopes and narrow, gorge-like valleys generally running North to South. The Indian logistic installations are between 350 to 400 kilometers in depth, and therefore, in terms of turn around time, comparable to that of the PLA in Tibet. Road axes connecting Indian foothills to the Indo-Tibet Border, being aligned more or less along the narrow valley floors, are extremely difficult to interdict by air or ground fire; these are targetable only in some stretches and even then require super-skills, high-technology and load of chance to score effective hits. Notably, scope exists to make such hits even more ineffective by means of modern methods of camouflage, deception and repair.