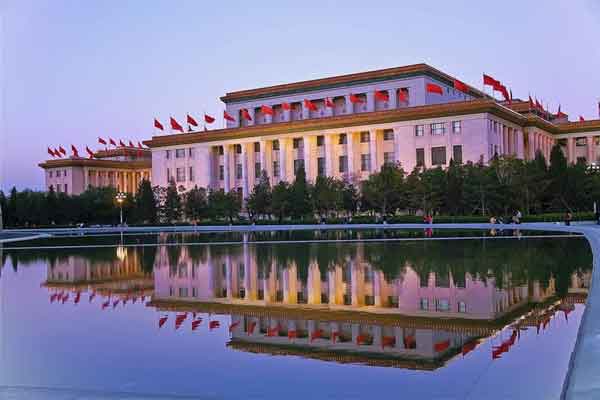 Just ten days before the founding of the People’s Republic of China (PRC), on 21 September 1949, in his opening address at the First Plenary Session of the Chinese People’s Political Consultative Conference, Mao Zedong proclaimed, “The Chinese People Have Stood Up!” Some of the significant utterances in his speech are as follows:

Ours will no longer be a nation subject to insult and humiliation. We have stood up.

The imperialists and the domestic reactionaries will certainly not take their defeat lying down….they are sure to engage in sabotage and create disturbances….This is inevitable and beyond all doubt, and under no circumstances must we relax our vigilance.

The era in which the Chinese people were regarded as uncivilized is now ended. We shall emerge in the world as a nation with an advanced culture.

Our people’s armed forces must be maintained and developed with the heroic and steeled People’s Liberation Army as the foundation. We will have not only a powerful army but also a powerful air force and a powerful navy.

Some strong advocacies believe that China, “under the banner of opposing the hegemon”, should align with every anti-American nation in the world, explicitly citing the powerful precedent of the Warring States coalition.

On the eve of the founding of the PRC, on 30 September 1949, Mao declared that the Central Government of the PRC, in accordance with the Common Programme, will “strengthen the people’s army, navy and air force, consolidate national defence, safeguard….territorial integrity and sovereignty, and oppose aggression by any imperialist country.” “On 28 January 1955, Mao said, “We have an expression, millet plus rifles. In the case of the United States, it is planes plus the A-bomb. However, if the United States with its planes plus the A-bomb is to launch a war of aggression against China, then China with its millet plus rifles is sure to emerge the victor.” The sense of self-esteem and confidence was instilled in the minds of the Chinese people, reminding them that they had the ability to defeat the US in the wars in Korea and Vietnam.

The stages of development in the PRC since 1949 till date can be summarized as follows:

After the US bombing of the Chinese Embassy in Belgrade, Chinese authors have repeatedly pointed out that one important cause of Americas future decline is its conscious choice of a mistaken foreign policy.

The CCP with its long history of struggle and military campaign got seasoned in the art of war typified by Maoist guerrilla tactics. Mao Zedong was not only a voracious reader of Chinese martial classics like Sunzi Bingfa (The Art of War by Sun Zi), but he also practically applied its theories of strategy and tactics in the battlefronts during the War of Resistance against Japan (1937-45), the War of Liberation against the Kuomintang led by Chiang Kai-shek (1945-49), and the Korean War (1950-53). In most cases, Mao applied the basic theory of yi gong wei shou (use attack as a means of defence). Mao was also very fond of the heroes in the novel Shuihuzhuan (Water Margin). In 1949, as a newly-born nation, China found itself encircled by hostile forces.

The Chinese leadership conceived the notion that the US imperialists were intending to establish an “anti-Communist zone for the encirclement and blockade of China.” Mao clearly professed that the Chinese should support whatever the enemy opposes and oppose whatever the enemy supports. The US was identified as the foremost enemy of the socialist China. At the beginning of the Korean War, in December 1950, in response to the US State Department’s measures to freeze China’s assets in the US, China too took possession of all assets of the US government and American enterprises within its territory and froze all US bank deposits in China.

In a speech at the first session of the preparatory meeting for the Eighth National Congress of the CCP on 30 August 1956, Mao Zedong urged the party members thus: “You have such a big population, such a vast territory and such rich resources, and what is more, you are said to be building socialism, which is supposed to be superior; if after working at it for fifty or sixty years you are still unable to overtake the United States, what a sorry figure you will cut! You should be read off the face of the earth. Therefore, to overtake the United States is not only possible, but absolutely necessary and obligatory. If we don’t, we the Chinese nation will be letting the nations of the world down and we will not be making much of a contribution to mankind.”

Such a philosophy is deeply rooted in the thoughts of the famous neo-Confucianist philosopher Meng Ke or Mencius (372-289 BC) who once said, Bu huan pin, er huan bu jun (Do not worry if you are poor, but worry that you are not equal to others). This thinking has inculcated an indomitable spirit among the Chinese people to strive hard and attain the objective of catching up with and even surpassing the dominant powers of the world. Vestiges of magnificent architectural feats can be seen in the construction of the Great Wall, the Grand Canal, the giant Buddhas at Longmen, Leshan and other places. The big thinking of the Chinese made them attain great heights even in science and technology as seen in the Four Great Inventions (si da faming)-paper, printing press, magnetic compass, and gunpowder; and smaller but significant discoveries like needle, lenses, etc.

The Chinese concept of country (guo), synonymous with state and nation in the Chinese vocabulary, in the archaic sense spoke more of administrative jurisdiction as observed in princely states during the Warring States Period (475-221 BC). The Chinese character guo was a picto-ideographic representation of land, people, and army within the territorial limits. Intense strategic calculations and bloody warfare characterized the pre-unification period of China. In the process of acute tussle, one kingdom used to get vanquished and annexed by the other. Words of admonition took shape in the form of idioms like Yu bang xiang zheng, yuren de li (When the snipe and the clam grapple, the fisherman profits), that is, it’s the third party that benefits from the tussle. Chinese statecraft is deeply rooted in such thought-provoking tales that stood the test of time.

In order to fully comprehend future global security environment from a Chinese perspective, one has to have a sound knowledge of Chinese, the analytic power to read between the lines in Chinese government documents, and most importantly an access to written tradition of statecraft that has been distilled into a few classic texts. Ancient Chinese statecraft is used as a lesson or metaphor to assess the future. Chinese references of statecraft to the Warring States Period remind the Chinese readers never to forget the eternal verities of geopolitics and worst case scenarios. The Chinese words fabao (translated as ‘magic weapon’) or shashoujian (translated as ‘killer mace’ or ‘trump card’ etc) tends to conceal the ancient Chinese concept of victory in warfare through possession of secret weapons that strike the enemy’s most vulnerable point, at precisely the decisive moment. Chinese analysts believe in geopolitics consistent with the texts of ancient statecraft.

China conducted its first nuclear test in 1964 and started developing rocket engines in 1965. And it also deployed intercontinental ballistic missiles (ICBM). In its urge to counter-balance the US, China started extending nuclear assistance to Iran, Syria, Libya, Algeria and others-the potential enemies of the US.

China calculates power ratios and predicts American decline. Chinese national security research analysts have mathematically analyzed the relative power of the nations in a new world structure where the US will decline economically, socially, militarily and internationally to become one of the five poles in a turbulent multipolar world. Chinese analysts are confident that US military forces can be defeated through ancient strategic techniques known collectively as yi ruo sheng qiang (the weak defeats the powerful). These they say through their experiences in different military campaigns.

The Chinese strategic think-tank regards the pattern of American dominance in the world as having been transformed from a “hegemonic power” into a “New Empire” with its essence remaining unchanged. If expounded in a formula, the so-called ‘global strategy’ can be expounded in the following formula:

However, Chinese analysts are well aware that there are serious disputes over policy decisions between the US administration and American strategic scholars. There are also contradictions between unilateraism and multilateralism, preemption and deterrence, etc. Rich Chinese idioms and metaphors embedded in ancient statecraft help in interpreting the future security environment. The age in which the classics of Chinese statecraft were produced was a time when a multi-state competition to become “hegemon” featured stratagems, small wars, interstate conferences, treaties, etc.

One set of lessons was how to become a hegemon; and another was how to survive destruction at the hands of a predatory hegemon. Chinese authors writing on the US today dwell on the concept of how to diagnose and deal with a powerful hegemon that seeks to dominate several other less powerful states. We find the word ba (hegemon) in many ancient texts dating back to 770-202 BC-in the form of bawang or bazhu (lit. despot, overlord, hegemon).

Chinese textbooks state that bourgeois states are greedy and constantly plot war and intervention; they are blocked from this course only by the socialist states who desire peace and development. In contrast to Western research that suggests miscalculation and misperceptions may be the leading cause of war, Chinese analysts assert that “scrambling for resources” causes war. Economic factors are the most fundamental cause triggering war.

Today’s Chinese concept of Comprehensive National Power (CNP) was invented in the early 1980s. The concept has its origin in the Chinese traditional military philosophy. Sun Zi identified “seven stratagems” that govern the outcome of war. Wu Zi wrote about six conditions in which, if the other side’s strength was greater, war should be avoided. Han Feizi demanded that strategy be based on cost-benefit calculations. Sun Zi warned that victory depended on calculations and estimates of enemy strength and weaknesses made in advance by advisers. Ancient Chinese strategists also attempted to help their country achieve dominance through non-warfare methods. In current times, calculating CNP can aid a nation not just for war but also to “coordinate a political and diplomatic offensive, to psychologically disintegrate the enemy forces and subdue them.”

3 thoughts on “The Chinese Way”