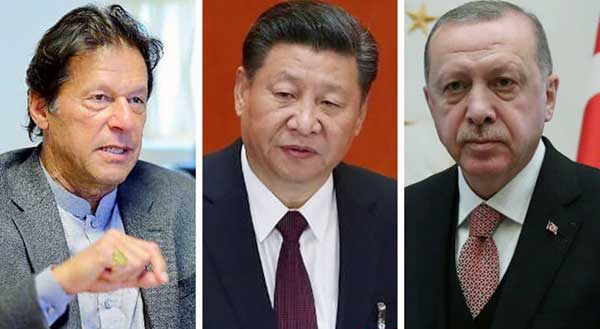 When Saudi Arabia’s Crown Prince Mohammed bin Salman visited China in February 2019 he did not criticize China for human rights violations against Uighur Muslims in Xinjiang where a million Uighur are incarcerated in concentration camps. Despite this when China prompted Pakistan to promote Turkey over Saudi Arabia in the Organization of Islamic Countries (OIC), it was found perplexing in certain quarters. China no doubt knows that Saudi Arabia wants good relations with Beijing but China can never get preference over the US in Riyadh’s global view. But there was a bigger strategic game that China is playing.

China has been following Sun Tzu’s dictum of the supreme art of war being to subdue the enemy without fighting but China also knows that in 21st Century Warfare “without fighting” implies using proxy boots on ground instead of own military. China had been keenly watching Turkey being used by the West to train and equip the Islamic State during 2013-2014 and subsequently act as conduit for inducting global jihadis (including from Pakistan) into Iraq-Syria. Equally exciting for China was the radical credentials of President Recep Tayyip Erdoğan throttling secularism in Turkey. Imran Khan’s bonding with Erdogan and Malaysia’s Mahathir Bin Mohamad too perhaps was on behest of Beijing.

China also noted that Turkey was openly supporting Pakistan over Kashmir against India in regional and international forums, and Turkish NGOs, including ones like Hayder Foundation, floated by Diyanet (Turkey’s Religious Directorate) promoting Erdogan’s radical agenda, were actively supporting separatists in J&K especially after India abrogated Article 370, as well as anti-India activities in states like Jharkhand and Bihar.  These NGO’s are members of the Union of NGOs of Islamic World ‘IDSB’, which has also recruited Islamic NGOs from India as members.

Moreover, Turkey also wields considerable influence over Islamic institutes in India and the ones that run courses in Turkish language. The radical turn given by Erdogan to the once wholly secular Turkey under Mustafa Kemal Atatürk has provided the opportunity for China to weaponize radical jihad against India and further the common China-Pakistan agenda in Kashmir.  Already the Student Islamic Organization (students’ wing of Jamaat-e-Islami) in India is suspected to be allied with the Turkish organizations for propagating political Islam in India.

Consolidation of relations with Iran has helped China’s strategic agenda hugely.  A leaked document in 2020 showed that China and Iran will implement a 25-year strategic partnership shortly under which China will invest in Iranian infrastructure, transport and seaports while Iran will provide a heavily discounted regular supply of its oil. American sanctions pushed Iran closer into the strategic influence of China and both are in confrontation with the US. America recently slapped sanctions on Turkey for having imported the S-400 missile system from Russia and drilling gas in Eastern Mediterranean. Turkey is still a member of NATO and whether that membership continues or NATO drops it, Turkey has firmly joined the China-Pakistan axis.

Imran Khan’s bonding with Erdogan and Malaysia’s Mahathir Bin Mohamad too perhaps was on behest of Beijing.

In December 2019, Iran, China and Russia conducted three-day joint naval drills in the Indian Ocean and the Gulf of Oman connecting the Straits of Hormuz. The participation from China was a guided missile destroyer while Russia fielded a frigate, a tanker and a tug boat from Russia’s Baltic Fleet. Iranian participation included two frigates, a corvette, a hovercraft and Iranian Revolutionary Guard Corps Navy (IRGCN) vessels Shahid Naserinejad and the catamaran Shahid Nazeri.

Turkey and Pakistan both openly supported Azerbaijan in the Azerbaijan-Armenia conflict over Nagorno-Karabakh and would have sent terrorist groups and regulars disguised as fighters for fighting in support of Azerbaijan.  Pakistan does not recognize Armenia and in the past too had been sending Islamist terrorist to back Azerbaijan’s military attacks on Armenia, as disclosed by Armenian officials. In Pakistan, Gwadar City is being fenced within a 30-day period on behest of China. Pakistan has opened Gwadar as a second border crossing with Iran in addition to the existing border crossing at Taftan on the Iran border which has been operational for past 70 years.

During the 10th edition of the trilateral Economic Cooperation Organization’s (ECO) Transport and Communications Ministers Meeting concluded in Istanbul on December 15, 2020, Pakistan, Turkey and Iran have agreed to resume the Istanbul-Tehran-Islamabad (ITI) cargo train service to boost economic ties between the three countries. This railway covers 6,500 km between Turkey and Pakistan via Iran; covering 1,950 km in Turkey, 2600 km in Iran and 1,990 km in Pakistan.

Recognized by the United Nations as an international corridor between Turkey, Iran and Pakistan, trial run of the ITI train was first done in 2009 when it took 13 days to cover the distance from Islamabad to Istanbul via Iran. This was later reduced to 11.5 in a subsequent run. The train then had a maximum capacity of twenty 40-feet containers. If any infrastructural improvement is required along the route it can be taken for granted that China will provide all necessary assistance. This railway will not only bring the three countries closer in economic cooperation but also boost Turkey-Pakistan military cooperation with this also used for military supplies.

Afghan Taliban has confirmed that its top leadership is in Pakistan, which implies that Taliban-Pakistan and by extension China are on the same page.

Turkish opposition is asking: “Are we going to replace the US military presence with our soldiers there?” To this, the Turkish government response is that the presence of Turkish troops in Libya and Afghanistan is in the national interest.  But unlike Libya where the Libyan government has requested for Turkish troops, the government of Afghanistan has not made any such request. There has been no announcement by NATO to extend the Resolute Support Mission by 18 months either. If that was the case, Turkish government would have told the opposition parties accordingly.

On December 10, 2020, Afghanistan’s National Directorate of Security (NDS) busted a Chinese spy-cum-terror cell in Kabul and arrested its 10 members. Arms, ammunition, Ketamine powder and other incriminating items were also recovered from them. These individuals say they were gathering information about Al Qaeda, Taliban, Uighurs and members of East Turkestan Islamic Movement (ETIM) in Afghanistan, which could be a cover in case caught. More likely they were operating in Kabul in conjunction Pakistan’s ISI and proxies to coordinate with Taliban and other terror groups operating in Afghanistan the post US troop pullout scene and how China can best subsume Afghanistan without deploying PLA in the same way US troops were.

India needs to closely monitor Turkey’s antics not only in India but also in Afghanistan and Pakistan.

Afghan Taliban has confirmed that its top leadership is in Pakistan, which implies that Taliban-Pakistan and by extension China are on the same page. Pakistani proxies have been operating in Afghanistan past decade plus, as are its Mujahids and regular army troops in covert mode in support of Taliban. It is quite possible that China is aiming for Turkish military deployments in Afghanistan (both overt and covert) in Afghanistan once US troops pullout. Erdogan, the radical maverick, would love such a suggestion by China. Turkey and Pakistan have already been undertaking joint operations in Nagorno-Karabkh in similar sub-conventional setting.

Turkey has recently discovered gold reserves which reportedly are estimated at 99 tons. However, the current state of Turkish economy is weak. Chinese investments in Turkey are just about US$ 2 billion presently but if Turkey provides troops to further Chinese strategic interests, China will reciprocate with much more investments.  India needs to closely monitor Turkey’s antics not only in India but also in Afghanistan and Pakistan. The China-Pakistan-Turkey axis will raise threat levels for India.

4 thoughts on “The China-Pakistan-Turkey Axis”