The case of the ‘All Weather Friends’ 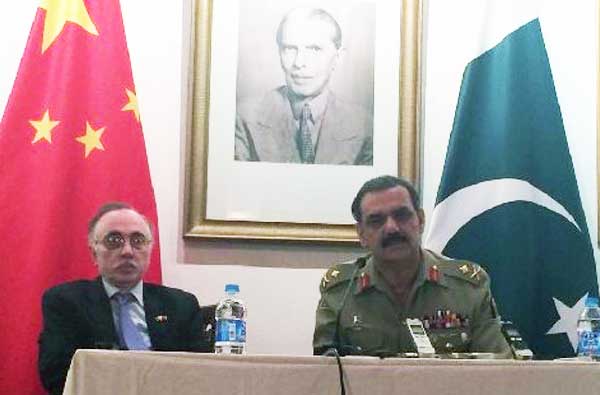 The Director General of the Inter Services Public Relations of the Pakistani military establishment, Major General Asim Saleem Bajwa, visited China from 14-18 October 2014. A statement made by this Pakistani officer that was reported by the Chinese media is of significance – “Pakistan takes enemies of China as our own enemies. We fight against Taliban; we fight even more vigorously against any enemy of China. That is how much we love the Chinese brother”. The statement sure has more to it than just mere familial ties and sibling bonding.

After Pakistan voted to grant China a seat in the United Nations, the Chinese withdrew the disputed maps in January 1962, agreeing to enter border talks in March.

That the matter was quoted in the Chinese media as it was ostensibly stated, it subtly indicates a concurrence of view by China. Is China conveying a message during this exchange of firing, across the Line of Control (LC) and the International Border, between India and Pakistan that it would stand by Pakistan? Around the same time, that is, 16/17 October 2014, it was reported in the Indian print media that China was closely studying this exchange of firing between India and Pakistan.

Pakistan’s diplomatic overtures to China commenced in earnest when it noted the rising belligerence between India and China in the period prior to the 1962 conflict between these two countries.

In 1959 the Pakistani government became concerned over Chinese maps that showed areas the Pakistanis considered their own as part of China. Seeing its aggressive stance on the issue of the boundary dispute with India, Pakistan did not want to take any chances. In 1961 Ayub Khan sent a formal note to China, to which there was no reply. It is thought that the Chinese might not have been motivated to negotiate with Pakistan because of Pakistan’s relations with India.

After Pakistan voted to grant China a seat in the United Nations, the Chinese withdrew the disputed maps in January 1962, agreeing to enter border talks in March. Negotiations between the nations officially began on October 13, 1962 and resulted in an Agreement being signed on 2 March 1963 by foreign ministers Chen Yi of China and Zulfikar Ali Bhutto of Pakistan.

Soon after the India-China war, Pakistan saw an opportunity to wrest Kashmir from what it perceived a weak India, by force, and it launched a war in 1965.

Under this Agreement, Pakistan handed over 5180 sq km of territory of the region of Shashgam Valley north of the Karakoram Range of Jammu & Kashmir to China. China readily accepted it, however, it did include a clause that the Agreement would be renegotiated on the final resolution of the J&K dispute – “the two parties agreed that after the settlement of the Kashmir dispute between Pakistan and India, the sovereign authority concerned will reopen negotiations with the government of the peoples’ republic of China on the boundary, as described in Article II of the present agreement of Kashmir, so as to sign a boundary treaty to replace the present agreement.”

Soon after the India-China war, Pakistan saw an opportunity to wrest Kashmir from what it perceived a weak India, by force, and it launched a war in 1965. Both before and during the war, the People’s Republic of China had been a major military associate of Pakistan and had invariably admonished India. There were also reports of Chinese troop movements on the Indian border to support Pakistan. As such, India agreed to the UN mandate in order to avoid a war on both borders. These were thus the first prominent signals of collusive support that China was ready to extend to a beleaguered Pakistan.

In the build up to the 1971 war with Pakistan, Manekshaw, taking no strategic chances, selected the date of commencement of operations in December of that year. At that time most of the high mountain passes in the Himalayan water-shed would be closed due to heavy accumulation of snow. As a consequence, even if the Chinese wanted there could be only minimal collusive support for Pakistan and India could pull out troops from the northern border areas for the major thrusts into erstwhile East Pakistan.

Unlike India, Pakistan cannot become a top-level strategic partner of China in international affairs due to its limited capabilities in the world arena.

After the 1971 war, China has steadily built up Pakistani military strength across the board and as a long term strategy ensured that India remains tied down on the western borders. The relations became more intense following India’s nuclear tests when China, under elaborate disguise, supported Pakistan in exploding similar devices and developing an array of missiles to deliver nuclear and conventional warheads. Despite the growing Turkic terrorist activities in Xinjiang, with the high probability of these emanating from Pakistan, the relations between these two countries continues to ‘flower’ as ‘all weather friends’ and the friendship being ‘higher than the mountains and deeper than the seas’.

Unlike India, Pakistan cannot become a top-level strategic partner of China in international affairs due to its limited capabilities in the world arena. Pakistan is not a major country in a global sense, although it plays an important role in regional affairs. Despite this, for a long time, China has tried to contain India diplomatically by intensifying bilateral relations with Pakistan. This formed the foundation for China to form a “strategic alliance” with Pakistan in the 1970s.

At the same time, Pakistan is becoming more important to China due to the frequent occurrence of terrorist attacks in Xinjiang in west China. Pakistan plays a bigger role in fighting terrorism than India, and Chinese leaders believe that terrorism will become a major obstacle for China in developing its western regions.   There is bound to be covert strains in the relations after the likes of a recent incident in Kashgar where terrorists opened fire in a farm market killing 18 persons with reports of four terrorists also being killed. Kashgar is the first major large town north of Kunjerab Pass and the Gilgit-Baltistan region of POK.  China has established an alliance with the SCO to fight terrorist forces in northwest China; it also will have to re-work with Pakistan to do so in southwest China, giving new meaning to the “strategic alliance” between China and Pakistan.

With these recent remarks by Major General AS Bajwa, Pakistan could be binding China in restating to India that come-what-may if Pakistan is pushed too hard China is set to intervene, may be by force in the Ladakh region. It is a possibility that needs to be taken cognisance of. The incidents on the LAC during the visit of Chinese President Xi Jinping is now being explained away by saying that like in India, different departments in China have different understanding of the boundary issue. Implying, that the PLA has its own perception of the LAC which is at variance to that of the government! Could the PLA orchestrate an incident which draws in and ties down significant diplomatic and military effort to ease India’s military and diplomatic pressure on Pakistan? It is likely possibility.

One thought on “The case of the ‘All Weather Friends’”