The Brexit conundrum and the limited options for Theresa May 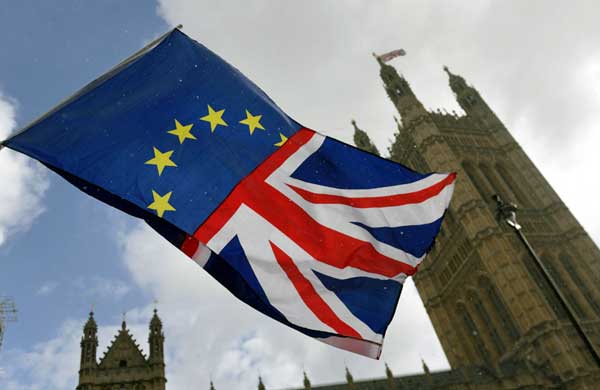 The time is running out for the British Prime Minister Theresa May as the March 29, 2019 deadline for Britain to leave the European Union(EU) is approaching. Her Brexit deal has fallen on the floor of House of Commons. She has, however, managed to survive a ‘No Confidence Vote’ after her Brexit deal was defeated by a record margin in Parliament with a overwhelming 432 MPs voting against it.

The United Kingdom (UK) had joined the European Communities (EC) in the year 1973 later endorsed by a referendum in 1975. But a lot of water has flown in the river Thames since then. The sporadic demand of withdrawal from European union has been a routine feature in every election campaign since 1980s. In the 2015 Parliamentary Elections, the Conservative Party had included in its manifesto to hold a national referendum and, hence, in order to live up to the campaign promise, the Conservative Prime Minister David Cameron held a referendum on 23 June 2016 asking , “Should the United Kingdom remain a member of the European Union or leave the European Union?” Around 72% of the UK voters participated in the referendum that resulted in a narrow but a stunning victory to ‘leave’ with 51.89 % votes as against ‘remain’ getting 48.11 % only. The remaining 0.08 % were invalid votes.

As per a study conducted by London School of Economics, the ‘leave’ campaign had the backing of the majority of whites, and those holding a socially conservative political belief of opposing cosmopolitanism and immigration. The older and less educated people were seen in favour of ‘leave’ campaign.

The premiership of Theresa May, after she took over after the resignation of David Cameroon, stands testimony to a tireless effort on her part to find a deal with European Union (EU) before Britain’s scheduled exit. She had negotiated and won the approval of European Union States on the Brexit deal of 611 pages that was signed off in an EU summit on 25 November, 2018 but could not muster support in her own country.

The Brexit deal contains a ‘Withdrawal Agreement’ outlining the UK’s actual exit from the EU and a ‘Political Declaration on a Future Framework’ covering the shape of a future relationship with EU. Since the deal , though approved by EU countries , has been rejected by the UK Parliament , the UK will leave the EU on 29 March 2019 with a ‘No Deal Brexit’.

Is referendum a correct form of democracy?

The British referendum on 23 June 2016 and its subsequent developments betrays the fact that referendums are not the right way to decide a complex issue. It makes no sense to leave a critical and sensitive issues to the people to decide who have no idea of the pros and cons of a matter or a situation. The direct democracy of the likes of referendum etc has its limitations. The people would vote in a referendum impetuously, insensitively, uninformed, on the basis of their demography, locality, personal interests, devoid of any national perspective and for a short term gain. Therefore, the representative democracy, elections of MPs/MLAs and Parliaments are mandatory institutions of paramount importance that offers an opportunity to chosen men of a structured discussion and debate before deciding an issue. The paradox of June 2016 UK referendum is that the Parliamentary elections, held after the ‘leave’ victory in the referendum, brought more MPs to House of Commons who are now on the ‘remain’ side making the Brexit deal to go through all the more difficult.

Why the Brexit Deal was defeated in British Parliament?

There were certain contentious issues that did not go down well with the House of Commons, particularly the issue of the Irish border. The draft Brexit deal envisages a July 2020 decision on what would have to be done to make sure the border stays open after the post-Brexit transition. The UK and Ireland are currently part of the EU single market and customs union, so products do not need to be inspected for customs and standards. The draft deal does not want the return of a “hard border” after Brexit. But any such step is likely to result in a separate status to Northern Ireland within EU which is not acceptable to the rest of the UK.

Secondly, the restriction on the freedom of movement of EU citizens was a key demand for many who voted ‘leave’ but the draft deal says that will happen at the end of the ‘transition period’. The draft deal guaranteed the existing rights of the millions of EU citizens living in the UK and the Britons living in elsewhere within EU. So on the ground, the ethnic and demographic situation remains as it is within UK. Future immigration rules were also not included in the Brexit deal. This was not liked by the ‘leave’ supporters.

Thirdly, the EU has a clear position that it would not allow British seafood a tariff-free access to EU markets unless it is in exchange for a reciprocal agreement of EU fishing fleets operating in British waters. But the draft deal says that the EU would apply tariffs on fish until a separate deal was struck on access to EU fishing in Britain’s waters. This clause was seen as to deceive the fishermen community and rightly so, the MPs from the coastal Britain were all up against it.

As per the draft Brexit deal, Britain will leave the EU on March 29 but remain inside the bloc’s single market and bound by its rules until the end of December 2020. This too means that in the field of trade and commerce, nothing was changing between UK and EU at the time being.

The Britain can go for a re- negotiation of deal with the EU states and that would require the consent of all the EU countries. This looks very unlikely. Further to be able to renegotiate with EU, there would be a requirement of an extension of Article 50 of European Union Act, that is extending the deadline of British exit from EU beyond March 29, 2019. Article 50 of the Treaty of European Union( Also known as Treaty of Lisbon) gives any EU member state the right to quit unilaterally and outlines the procedure for doing so. Under this article the British Government can obtain an extension from the European Union provided all the 27 EU States agree to that. There is a broad consensus building in UK that they should go for an extension of time of exit from EU to allow them to work out some new formulae.

The ’No Deal Brexit’ is the worst option. It will put the wheel of economic and public exchange between UK and EU countries dysfunctional coming to a sudden halt. The worst affected would be the trade. In absence of any deal, the trade between UK and EU will then have to be regulated under World Trade Organisation (WTO) rules, something neither the British nor the EU traders are used to.

The best option could be going for the second referendum, but that would necessitate legislation of a new act by the British Parliament to seek referendum on the same issue twice. In that scenario too, the extension of Article 50 is necessary otherwise Britain would be exiting the EU without any deal. Meanwhile the EU Court has pronounced in a recent judgement that Britain may unilaterally cancel the Brexit and this would not require the approval of 27 EU States. It means, if at all the second referendum takes place and there is a ‘No to Brexit’, it will have no complication or any issues with EU countries and everything will be back to normal. Let’s hope a better sense prevails.