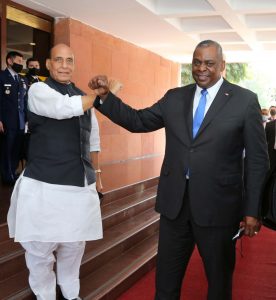 The Union Minister for Defence, Shri Rajnath Singh with the US Defence Secretary, Mr. Lloyd Austin after bilateral talks, in New Delhi on March 20, 2021.

When US Secretary of Defence Lloyd Austin visited India in March 2021, all he had to say about the Chinese invasion in Eastern Ladakh (April-May 2020) was a quip to the media saying “we never knew India and China were so close to war”. This was despite the India-US intelligence sharing arrangement. Not only did China move two motorized divisions to eastern Ladakh, the PLA had constructed a new road leading up to five kilometer short of Galwan. The least that the US could have done was to warn India of movement of the PLA formations but it chose to keep quiet.

Speaking at the Shangri-La Dialogue in Singapore on June 11, 2022, Austin said China is taking aggressive and illegal approaches to the territories it claims in the South China Sea and advancing its illegal maritime plans. “Further to the West, we see Beijing continuing to harden the position along the borders it shares with India,” he said. Some other highlights of his talk included:

Austin talked about aggressive Chinese moves in the region, American support for the ‘One China’ policy, multiple exercises by US and allies in the region, and US resolve to deter aggression.

The question and answer session post Austin’s address witnessed Bonnie Glaser (US) questioning deterrent steps required if China attempts to seize Taiwan with President Biden said he would defend Taiwan if attacked. Austin gave a roundabout answer saying “unilateral change to the status quo would be unwelcome and ill-advised”. He then said America remains committed to the ‘One China’ policy but would provide Taiwan with military means to defend itself.

Jeffrey Urdiniao (Philippines) said China built artificial islands and militarized them (stationing bombers and fighters) in South China Sea despite frequent US warnings of consequences; so  what will be different in the Biden administration’s approach because the current policy is not working or changing the behavior of China?” Austin’s fuddled response was, “Some of the consequences ….that allies and partners grow closer together and work together in a more deliberate way to …. protect their interest and their territory on waters….like-minded countries bond together to create new capabilities…. much more united region….focused so much more on a free and open Indo-Pacific…”.

Lin Kook (Singapore), referring Japanese Prime Minister Kishida cautioning that “Ukraine today may be East Asia tomorrow”, said complacency should be avoided because China is like Russia and will act like it.  Austin’s response was centred around a powerful global response to the Ukraine conflict and international rule based order.

From the above, a number of issues merit closer scrutiny. Foremost is reiteration of ‘rule based international order’ by Austin and US officials is a joke considering America’s ‘blackest of black’ history; running rogue over decades and centuries. Besides, calling the Indo-Pacific America’s centre of gravity is fine but what is the response to Chinese aggressive moves and the US supporting the ‘One China’ policy – coalitions and more coalitions while sitting on the fence to promote American interests and let nations fend for themselves? Why the dither to add South Korea to the Quad, which appears willing – scared of Beijing?

Chinese defence minister Wei Fenghe has accused Washington of trying to hijack Asia-Pacific countries under the garb of multilateralism, turning them against China. he says China will not flinch from war if Taiwan takes a decisive step towards independence. Obviously, America will fight China in the same manner it is fighting Russia today – using Ukraine as its proxy. What is meant by “America stands by its friends” – selling arms, like to Ukraine? If the US considers India as the stabilizing force in the region, why doesn’t it support ‘One India’ rather than random comments about PLA activities across the Line of Control?

Austin’s emphasis on emerging technologies is interesting. China just launched the world’s first artificial intelligence-operated drone carrier. On December 4, 2021, General David Thompson, Deputy Commander of the US Space Force for Space Operations, said “China is developing its space capabilities twice as fast as the US. Beijing is capable of surpassing the US in space capabilities by the end of the decade.” A recent article in the Wall Street Journal says proliferation of PLA bases is being matched with an ever-growing Chinese navy. The US is heading in the opposite direction, with 297 ships and plans to fall to 280 by 2027. China has 355 and is headed to 460 by 2030. Beijing relies on smaller vessels, but it will soon launch an advanced aircraft carrier that will let it project air power abroad.

American policy in the Indo-Pacific remains more rhetorical while China has merrily gone about its business, recently signing economic and security deals with Solomon Islands and Samoa and discovery of a Chinese base coming up in Cambodia. Much before the US started bandying about the centrality of ASEAN in the Indo-Pacific, China had hijacked Cambodia and Laos to break the cohesion of ASEAN.

In the West, America continues to expand coalitions and partnerships. The European Commission President Ursula von der Leyen, referred to as the Nazi Babe by some, has assured Ukraine’s comedian-President Volodymyr Zelenskyy that decision on Ukraine’s admission to the EU will be taken within a week. This will help Joe Biden tell the EU to pay for Ukraine’s reconstruction, much like Donald Trump said “NATO must pay more”.

Biden’s aim is for the Ukraine conflict to reduce Russian military capability to the extent it cannot be a threat to any country, even as Russia is going about achieving its aims notwithstanding the long-range weapons supplied by the US and Britain. Henry Kissinger recently wrote an op-ed in the Sunday Times saying, “It will be necessary to find a place for Ukraine and also for Russia if we do not want Russia to become China’s outpost in Europe.” But the US appears busy in deflecting Biden’s demonstrated dementia with propaganda that Vladimir Putin is suffering from cancer and Xi Jinping is afflicted with cerebral aneurysm.

Washington is ecstatic over the US arms industry raking in billions and calculating how much America will earn from reconstruction of Ukraine. But Biden’s Ukraine policy is in shambles. American scholars, diplomats and former military and intelligence officials have been pointing out the foolishness. Now General David Richards, Britain’s former Chief of Defence Staff, says; Western coalition has no strategy at all regarding the conflict in Ukraine and future relations with Russia; NATO countries are making tactical mistakes without any consideration to long-term consequences; there is no coordination between Western allies;  neither Washington nor London are considering how they will build relations with Moscow after Ukrainian conflict ends, thus, pushing Moscow towards a strategic partnership with China.

The ‘Ukraine Bungle’ after the rout from Afghanistan has lowered credibility of the Biden administration further. The country has become a laughing stock with Trump being accused of attacking Capitol Hill and Biden causing energy and food shortages worldwide with poorer countries being the worst hit and record high inflation in the West. By forging stronger China-Russia bonds, Washington is scripting its own doom.