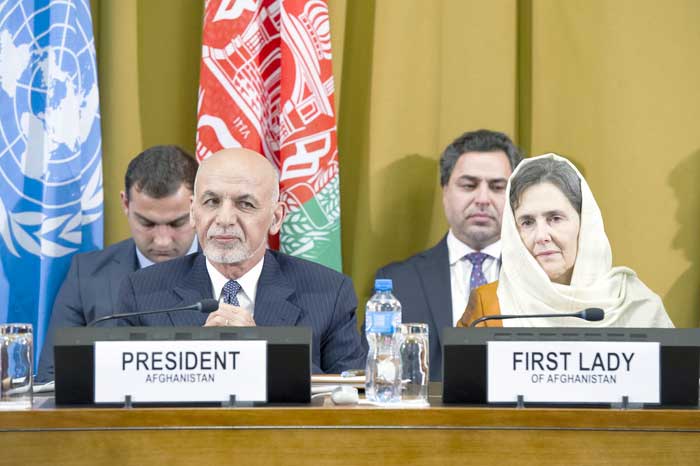 The United Nations and the Afghan Government have come together to collaborate on the Geneva conference which was held from 27-28 November 2018. The Geneva conference was the third high-level international conference on Afghan peace since 2001.  It was a ministerial level conference between the Afghan government and international supporters and stakeholders with a sole focus on peace and development in Afghanistan. The conference presented an opportunity for the government to emphasize on their development and reform agenda and gave a brief on its commitments for development priorities until 2020. Furthermore, it provided a platform for the Afghan government to put forward its concerns and for the world to renew its commitment and solidarity with the Afghans in search of peace and security. President Ashraf Ghani spoke about the investment opportunities in Afghanistan mainly on the sectors of energy, construction and infrastructure.

The idea of holding the Geneva conference emanated from the Bonn conference, which was held in 2011 in which the international community agreed on a ‘transformation decade’ for the country. In addition, in July 2018, the international community and the Afghan government convened the 21st joint coordination monitoring board meeting (JCMB) to discuss progress and the way forward in implementing the government’s reform agenda and the work to be addressed before holding the Geneva conference on Afghanistan. Moreover, Afghanistan was hoping for abundance of global assistance for the country to achieve self-reliance by 2024.  It is believed that the 2018 Geneva conference was focused on policy and strategy other than the Tokyo (2012) and the Brussels (2016) conferences, which were seen as the pledging conferences.  The conference came at a point when the United States is trying to hold peace talks with the Taliban. This, in turn, provides a renewed focus on pushing peace process forward, owned and led by the Afghans themselves.

The fundamental goal of the conference was to show solidarity with the Afghan government and citizens for their peace efforts. The Afghan delegation presented its growth strategy, which ranged from maintaining security, building infrastructure to combating corruption and female empowerment. This conference also offered an exclusive opportunity for the civil society to convey the discontent among general population about the worsening socio-economic conditions in Afghanistan. While addressing the conference, President Ghani said, ‘the unrestrained war unleashed upon the Afghan people, society and state is taking a huge toll, making peace and security our top national imperative’.

Well aware of the situation in Afghanistan, the Afghans have also emphasized the need for the constructive contribution from the international community. Any hope for return of peace in the region was reignited when US envoy, Zalmay Khalilzad held talks with Taliban in November 2018 to renew the peace process. Unfortunately, talks had no concrete conclusion or a breakthrough. It is widely believed that the Geneva summit would give an opportunity to the Afghan government to rely on international community to support ‘Afghan led and Afghan owned’ peace process. The Taliban’s main aim is to drive out the international forces from the country and establish their own legal system based on the strict Islamic jurisprudence.

Through this conference, the United Nations focused on the continuation of their persistent support and commitment to the development of Afghanistan, aiming to end a 17-year long war, which is rather a far-fetched dream. UN Secretary General Antonio Guterres said, ‘our hearts go out to all Afghans who have been affected by conflict, trauma and suffering’. He hoped that this conference would prove to be an effective platform to generate efforts to achieve stability in the region. Moreover, the UN Secretary General’s special representative for Afghanistan, Tadamichi Yamamoto, called for National Unity Government to take firm steps towards fighting corruption and ensuring the transparent presidential elections in 2019.

One of the major formal outcomes of this conference was the expectation of renewal of Afghanistan’s commitments to international partners, which is named as Geneva mutual accountability framework (GMAF). The chief executive Abdullah Abdullah brought out the issue of Afghan migrants and internally displaced persons. Afghans have grown up knowing conflict and this is the reason that there is a large number of Afghan migrants. People in Afghanistan only want violence to end and peace to prevail, for them to feel secure in their own home. The conference also brought out the issue of the situation of the Afghan women, which further implies that the decisions on the future of Afghanistan shall be made with the participation of all the citizens and, women should also be directly involved in the peace process. “Not only does peace last longer when women lead and participate in peace processes, but also women have a right to participate in negotiating peace in Afghanistan,” said Aleta Miller, the UN Women Country Representative for Afghanistan.

The year 2019 will mark the four decades of instability in Afghanistan. US envoy Khalilzad hopes to encourage Pakistan to cooperate with the Afghan peace process in his latest trip to Islamabad. If Pakistan decides to withdraw support and pressurizes the Taliban to join peace talks, it could trigger trends towards cooperation. However, the Geneva conference noted that much has to be done in areas of security and to push peace talks forward. The conference also emphasized the Afghan government’s use of billions of dollars in foreign aid for health care, education, humanitarian support since 2016. Despite the Geneva conference being considered as a chance for Afghanistan to offer a comprehensive strategy for self-sufficiency and to review the country’s progress, it needs to invigorate its efforts to work on the stability of the region from the ground level.