Ten thousand Chinese teachers for India: that’s good news. In the years to come, it will be more and more important to know Chinese, whether the rise of China is peaceful or not. 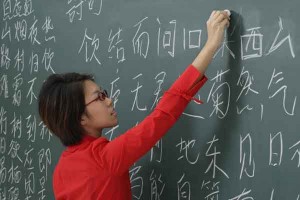 The initiative taken by Minister of Human Resource Development Kapil Sibal and his Taiwanese counterpart is therefore excellent.

A few months back, I had said the most positive aspect of Premier Wen Jiabao’s visit to India (in December 2010) was the opening of a school to learn Chinese in Delhi.

It reminds me of the story of a senior Indian Officer who was taken prisoner of war in Tibet/China after the October 1962 debacle.

One thing that he noted was the proficiency of the Chinese in Indian languages:

It was a real surprise for us when one day a Chinese woman came and recited some of Bahadur Shah Zafars poems, much to the delight of us all, but particularly so of Rattan [another Indian officer prisoner of war]. This lady and Rattan did have an exchange of couplets of Zafars poems written while he was pining away in Rangoon for his homeland after deportation by the British from his last Mohgul kingdom in Delhi following the so-called mutiny of 1857. The Chinese had certainly prepared for this war most diligently because they had interpreters for every Indian language right in the front line. This Urdu-speaking woman must have lived in Lucknow for a long time.

The same officer recounts another story worth reproducing:

There was a beautiful demonstration of the high calibre of the Indian soldier under adverse conditions. After we had been in the camp for about a month, we were taken out of our confinement for a walk. This was at our insistence on wanting to exercise ourselves and to get out of the dark and dingy rooms. We were thrilled to be out in the sun. Inspite of protests from Lt Tong [Chinese guard] not to do so, we sat down against a wall to sun ourselves. As luck would have it, though we could not see over the wall, we heard voices in Hindi from the other side. Fortunately, Lt Tong did not understand Hindi otherwise he would have forced us to get up and move away. What we heard from the other side made us feel very proud to belong to the Indian Army. It was a Hindi-speaking Chinese talking to some jawans, obviously from 9 Punjab judging from their manner of speaking. The talk was going in the usual way about how India had attacked first. A jawan told the Chinese that his company was sleeping when the Chinese attack came, so how could India have started the war? The Chinese tried to explain that he (the Indian soldier) was only thinking of his sub-unit but India had attacked elsewhere and the Chinese had to take action in self defence in his sector. The Indian jawan was obviously fearless and outspoken and said, “I do not know what you are talking about but the whole of my battalion and the `burgerade’, (as a Punjabi soldier would pronounce the word ‘brigade’) were sleeping when you attacked first”.The Chinese tried to talk of other sectors but this jawan was not taken in. So, the Chinese then said, “your reactionary government of Nehru has made friends with America. Every day big American planes are landing in Tezpur bringing weapons including automatic rifles. So obviously your Nehru does not want to be friends with China. These Americans are nothing but ‘paper tigers’.” The Chinese use of the term `paper tiger’ for the Americans was frequent (from Maj. Gen. K.K. Tewari, A Soldier’s Voyage to Self Discovery, 2002).

The Indian soldiers may have not been well prepared for the conflict, but they did not lack courage.

It reminds that India has to ask Taiwan and not China for Chinese teachers. This shows a deficit of trust vis-a-vis the PRC. It is true that the percentage of spies should be less if the teachers come from Taipei than Beijing.