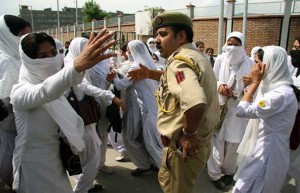 On December 09, 2018 two teenagers Mudasir Rashid Parray, 14, and Saqib Bilal Sheikh, 16 were killed in a gun battle with the security forces. It shook the Kashmir valley and question was raised, what prompted these children to join the terror ranks? It was not the first instance of teenagers joining terror ranks, but what was different was refusal of these young boys to surrender or return back to lead normal life. Abdul Basit, a resident of South Kashmir said, “There was an option to arrest or motivate them to surrender. It shows that the state is at war with the people.”[1]

First question that comes up is, why these children joined terror ranks at an age when they were supposed to be going to the school and playing with the children of their age group.

But why did the people like Abdul Basit not make an effort to bring back these misguided youths who have joined terror ranks? It is easy to blame the government and security forces for their own failure. In fact after the operation it was reported that the soldiers even expressed shock that these were young children. But these children fought doggedly holding on for almost 18 hours. This question also needs to be answered here that why forces did not give them chance to surrender or arrest.

This incident may be pointing a finger at the security forces and the government, why the lives of the children could not be saved. But the issue is not so simple. First question that comes up is, why these children joined terror ranks at an age when they were supposed to be going to the school and playing with the children of their age group. Owais Farooqi, a journalist based in North Kashmir said, “Children are growing in a hostile environment wherein killings, violence, and humiliations are happening every day.”[2]

Some experts believe that the children of war cherish the desire to seek self-determination that is motivating them to join terror organisations. The glamour and idolisation of terrorists is also one of the major factors that is acting as glue for these young children to gun culture. Sheikh Showkat Hussain, a political commentator from Kashmir says that, “It’s a social phenomenon that is passing from one generation to next. No one is forcing them to pick up arms.”[3]

But then another question comes up, what is the role of parents, teachers, civil society and religious leaders under such circumstances? Are they not responsible for shaping the future of the children? Why should they not own the responsibility to prevent children from the path of violence instead of blaming government for every ill within the society?

Parenting is not the responsibility of the government. It is the responsibility of the parents to ensure that the children are insulated from the toxic surroundings and made to realise what is in their best interest. It is not possible that parents or the siblings do not know what the children are upto. Under noxious surroundings the parents have to be more vigilant to ensure that the children do not become victims of radicalization or motivated by terror ideologues to pick up arms. Good teaching is at the core of counter-radicalisation,[4]teachers in the schools and colleges can identify gaps in intervention and prevention or radicalisation.

Similarly, the teachers invariably know what their pupils are up to. How often do they bunk classes and where do they spend their time. If there is a communication between parents and the teachers, the menace of children going astray to a great extent can be curbed. However, if the teachers themselves are party to the crime, in that case it is a societal problem that society needs to fix within.

Where is Kashmiri society? What role is it playing to break the cycle of violence? Similarly, what role is being played by religious teachers and seminaries? Are they not responsible to guide the youth and prevent them from taking the path of violence? Are they not supposed to make people and children aware of their responsibility as a citizen and true Muslims? Instead of asking youth to come out and indulge in stone pelting and then create conditions where security forces are compelled to act in self-defence, why civil society is not holding these radicals accountable for murder of youths? Why is the civil society quiet about such contempt by the religious leaders and separatists? The civil society and religious organisations have played a dubious role because no one has asked them the question what they have done to prevent Kashmir become next Syria or Afghanistan.

…if teachers and religious leaders themselves act as recruiter, in that case society is doomed and the blame cannot be put on the state and security forces.

In fact Mudasir and Saqib Bilal were not killed by security forces but these young children were failed by their parents, teachers, civil society and religious leaders who could not understand the predicament of the impressionable minds. Thus the blame cannot be shifted to the security forces and the government. The cycle of violence, and taking the children off the street is the sole responsibility of these four key institutions.

One must ask the questions from the religious leaders, teachers and elders of the society, how many terrorists they brought back or created environment for them to surrender? They cannot sit on the sidelines and pass judgment on the actions of security forces for their own failure? There is no evidence of any one of these institutions having stood up against the terror ideologues or radicals to stop radicalisation of their children. Who can pick up early signs of radicalization? There is no simple model of easy-to-spot signs of “radicalisation”.

However, if someone can spot radicalisation or change in behavior of a child, it is parents, teachers and the Mollavi. It is really not possible that all of them fail to identify early signs of radicalisation. But if teachers and religious leaders themselves act as recruiter, in that case society is doomed and the blame cannot be put on the state and security forces.

It is an investment to reclaim a radicalized youth than to eliminate him. As part of standard operating procedure, it has been sincere endeavor of the security forces to get surrender of the terrorists. Without exception the local commanders regularly interact with the parents, mollavis and elders to ensure that the young children are encouraged to return back. Even mothers and sisters are repeatedly being asked to contact their sons and brothers to return back with an assurance that they would not be harmed if they shun the path of violence. However, either due to fear or stigma of parents of surrendered Jihadi more often hold the parents back.

The government and security forces cannot replace or assume the responsibilities of parents, teachers, religious leaders and the civil society.

Thus it is high time that the government, parents body, religious leaders and civil society elders sit down together to fix this downslide and make collective efforts to keep the children off the streets and insulate them from toxic environment.

Research on education in conflict zones has shown that schools can play a vital role in combating extremist ideas. But in order to do this pupils need to engage across communal boundaries and learn how to challenge ideas. Difficult conversations need to take place and teachers need to feel confident in leading them.[5]

There is a need for brave teachers, parents and religious leaders who can prevent children joining the terror ranks.

[4]Anthony Bergin, Good teaching is at the core of counter-radicalisation, ABC News, June 03, 2015.

[5]Teachers on the frontline against terror: what should schools do about radicalisation? The Conversation, June 30, 2015.

One thought on “Teenage Terrorists of Kashmir: Collective Failure of Parents Teachers & Society”