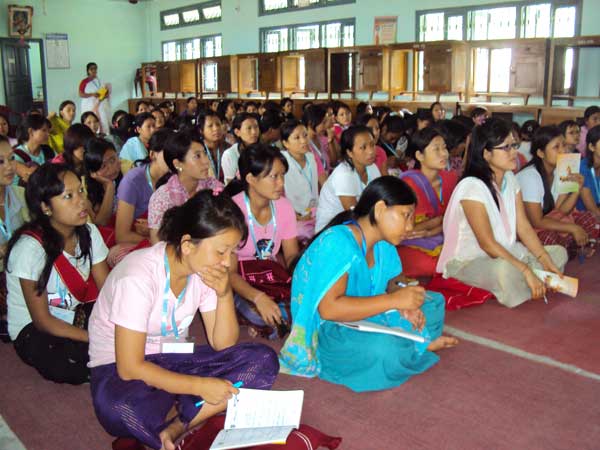 A youth camp of 645 young college students of some 28 colleges and technical institutions of Arunachal Pradesh was held at Itanagar. The Camp was conducted from 11-16th October 2010. It was inaugurated by Mr. Bosiram Siram, the Honourable Cabinet Minister for Education of the State of Arunachal Pradesh.

I was invited to speak to the students of this Youth Camp. It turned out to be a most memorable and unforgettable experience. I went to teach, but was left speechless and deeply moved by the burning patriotic fervour and tremendous enthusiasm of these tribal youths from the Adi, Apatani, Monpa, Mishmi, Nyishi, Tagin and so many other tribes, who had come from all corners of this border state.

All of them were fluent in a pure and Sanskritised form of Hindi. They were well informed and deeply aware of national, regional and global issues.

The Army Headquarter must expedite the raising of these Arunachal Scout battalions, for in the heightened threat profile, they have a very significant role to play.

They have an innate flair for community singing and their melodious chanting of Sanskrit hymns from the Vedas and Upanishads left one spellbound. In fact, it moved one to tears to see their love for their country and culture. Who says that India ends in the North East? Frankly, it begins there.

As part of the workshop, we interacted more intimately with the young and enthusiastic college students in group discussions. What one group of students from Tawang said, took our breath away. The young people of Tawang had decided to boycott all Chinese goods.

They were agitated that some Marwari traders were resisting this boycott for the purposes of economic gains/profits. They were claiming they brought these cheap goods from legitimate channels and hence, should be allowed to sell them. The students felt this keenly as a betrayal.

China had evil designs on their beautiful state and this was their forthright response. They were not enamoured of China or its totalitarian state model. Some of them were quite keenly aware of how Tibetan Buddhism had virtually been destroyed, how the Dalai Lama and thousands of Tibetans had to flee their homeland forever, simply to preserve their culture and their way of life.

The sad saga of Tibetan resistance to Hanisation was fresh in their memories. The Hans in Tibet now outnumber the local people. A century down the line, Tibet would cease to exist as a unique cultural and linguistic entity.

The response of the young people of Tawang was a page straight out of the history of the Freedom Struggle. In a poignant statement (so very reminiscent of Gandhiji’s approach in our freedom Struggle), they had decided to boycott Chinese goods in Tawang.

The message was loud and clear – they saw them as prospective colonizers of their sacred land; as aliens and invaders who would destroy their culture and efface their unique identity.

…the Arunachal Pradesh Scouts will give as good an account of themselves in battle, as the brave Nunoos of the Ladakh Scouts. In Siachen and Kargil, the Ladakh Scouts have become a byword for bravery, grit and sheer tenacity.

What else moved these young people? “Why is height such a disqualification for joining the Army?” One young man after another asked me this agonizing question. Their tremendous zeal and enthusiasm for joining the Army was so patently visible. Also apparent was their keen disappointment over being rejected on the basis of not being tall enough.

One patiently tried to explain that 1.5 cm worth of concession in height stipulation was in vogue for the people of Arunachal Pradesh. However, the palpable disappointment on their faces was so visible. As a Military Commander, I would have given my right arm to have such motivated and enthusiastic young men in our fighting units.

If there was one thing that they were so keenly looking forward to, it was the raising of two battalions of the Arunachal Pradesh Scouts. Seeing the burning zeal and commitment of these young Apatani, Monpa, Tagin and Mishmi boys, I felt the Indian Army would do itself the greatest favour by expediting the raising of these Arunachal Scout battalions.

I cannot understand where is the hold up. I am told these battalions are in the pipeline and will fructify soon. I am certain, that as and when that happens, the Arunachal Pradesh Scouts will give as good an account of themselves in battle, as the brave Nunoos of the Ladakh Scouts. In Siachen and Kargil, the Ladakh Scouts have become a byword for bravery, grit and sheer tenacity.

Having seen these young boys from Tawang, I cannot help feeling they will be as good, if not better than our Ladakh Scout units. The Army Headquarter must expedite the raising of these Arunachal Scout battalions, for in the heightened threat profile, they have a very significant role to play.

As the helicopter took off from Itanagar, the haunting strains of 645 boys and girls, chanting Sanskrit hymns from the Vedas and the Upanishads, lingered in my ears. It had been a beautiful and unforgettable experience.

I could not help thinking that what we were seeing was the beginning of a remarkable Indian revival; a great civilizational renewal and it was starting from the Eastern-most corner of India. With such dedicated boys and girls, the sun of an Indian renaissance will truly rise from Arunachal Pradesh and spread to the rest of our land.

God Bless these children and their beautiful chants of faith and confidence in being the proud inheritors of an ancient Indian tradition of excellence. It restores my faith in the manifest destiny of the Indian people. The decision of the youth of Tawang to boycott Chinese goods is a clarion call that should raise the rest of the country out of its slumber.