Take the war to the enemy 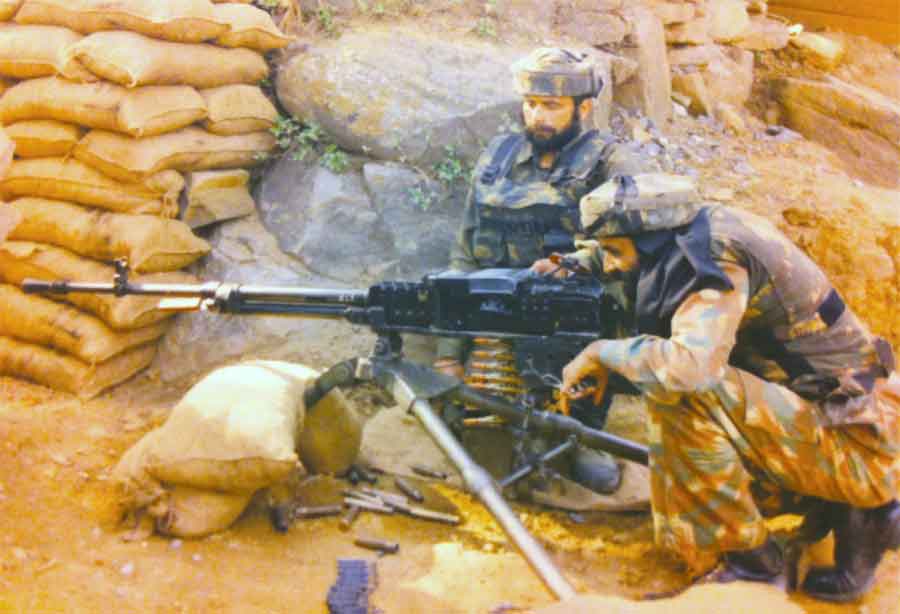 Pakistan’s superior psychological warfare machinery further tied down the already overstretched Indian security forces in knots. Airports and railway stations are the new fortresses that are heavily guarded. Next will be Metro stations or shopping malls. The list is endless. This is what the enemy wants — tire and dull the edges of the security forces of India by making them run hither and thither.

Imagine, if ten trained terrorists from Karachi can hold the financial capital of India to ransom for days, what will happen if 500 pour in from different points into the country? They can literally bring the entire nation to its knees.

This remains the single important reason why intelligence and police machinery of the Union and the states have collapsed. Perpetual red alerts, 24×7 for the past three decades, have reduced them to dysfunctional entities with no declared objectives to achieve. The ease with which Parliament or Mumbai were attacked stands witness to the fact. Worse, our leadership’s response to the threat posed was too shameful to comment upon.

New Delhi is walking into the trap by superficially trying to guard every inch. Neither feasible nor a method recommended. The Indian leadership that inducted the security forces in a marshy land of insurgency and terrorism for more than two decades without any clarity in political or military objectives is adding to the confusion. The recent failure in Poonch speaks volumes about the utter ‘lack of direction’ that the response of the state has acquired over a period of time.

Forces that are inducted into battles always need clarity of purpose, military objectives unambiguously spelt out, and swiftness in conduct of operations to avoid demoralization. Otherwise, battles cannot be won and there is likelihood of the forces landing in disarray. It appears to be now happening to the Indian security apparatus on the ground.

Imagine, if ten trained terrorists from Karachi can hold the financial capital of India to ransom for days, what will happen if 500 pour in from different points into the country? They can literally bring the entire nation to its knees. After Mumbai, ISI brought Guwahti to a halt in the northeast, and in Poonch, a few terrorists forced deployment of 1500 army personnel for an eight day running gun-battle in the dense forest. Merely thirty terrorists between themselves held up vast swathe of territory and a huge chunk of the security apparatus from Mumbai in the west to the northeast and Kashmir! The cost to the state in its ever-expanding security apparatus is huge. Worse, the demoralization setting in the forces for want of clarity of purpose will in the ultimate analysis add to the threat to the territorial integrity of the Union.

To say that the threat from radical Islam was not known despite the collapse of the intelligence machinery is not true. The very fact that the Prime Minister and his colleagues are compelled since many years to move under heavy security blanket in their own capital city with policemen lined-up all along the roads is a shameful admission of the existing threat to the Union. Couple this fact with the increasing frequency of attacks by the Islamic terrorists in recent times and the entire threat perception becomes crystal clear.

The very fact that the Prime Minister and his colleagues are compelled since many years to move under heavy security blanket in their own capital city with policemen lined-up all along the roads is a shameful admission of the existing threat to the Union.

To tie up security forces in knots internally to deal with the externally sponsored, trained, and petro-dollar financed terrorism exported by the Pakistan army and the Inter Services Intelligence is bound to deaden their morale and will to fight. While there is definitely an internal dimension to security, to put the forces within on a self-destructive directionless path is exactly what the enemy wants!

Either the political set up in New Delhi has not understood this raw truth in war fighting or is too scared to take the war back to enemy territory. This war must be fought decisively in Pakistan before it engulfs the Union of India in its entirety.

Pakistan is in cahoots with other dictatorial regimes on our borders. China wants to tie down India to retain its top-dog status in Asia. Maoist Nepal favors China. Bangladesh, another laboratory of radical Islam, is in connivance with these dictatorial regimes. The subtle alliance of China, Pakistan, Bangladesh and Nepal Maoists pose a combined threat to the territorial integrity of India. Of course, overtly these regimes pretend to work in isolation of each other so as not to alarm New Delhi.

To avoid destruction of our forces by deployment in unending internal circuses, and before war fatigue sets in, we need to take the war imposed by radical Islam to the enemy territory. Unless the source of supply is disabled, this war cannot be won. The core group orchestrating this drama is the Pakistan army and the ISI. These external links are required to be put in disarray. This can only happen if the war is re-exported to Pakistan.

If the poisonous flow from the external channels is not stopped, Indian Muslims too will be radicalized, which is the primary aim of Pakistan. Similarly, a backlash from the majority that is responsible for the liberal philosophy of India can wreck the democratic set-up. Non-governance is no longer an option available to the prime minister. Mumbai and other attacks mounted by terrorists on other Indian cities, could not have taken place without local support. For the police or intelligence agencies to profess otherwise is untruthful.

Another falsehood perpetuated by the eternally helpless breed of Indians is that a stable Pakistan is in India’s interest. It is not, stable or otherwise. Pakistan is a failed State. It is on the brink of disintegration. It simply needs to be helped to remove itself and the map redrawn. Otherwise, the cost to India will keep increasing disproportionately.

To take this war to the enemy, New Delhi needs a deliberate, graduated and escalating response with a clear political and military objective to help Islamabad unravel:

To avoid destruction of our forces by deployment in unending internal circuses, and before war fatigue sets in, we need to take the war imposed by radical Islam to the enemy territory.

Instead of being at cross-purposes with the Indian media, Asia’s largest, harness its resources to conduct unprecedented psychological warfare. In times of war, the media is a weapon, a platform to be used intelligently to secure the national interests without attempting to hinder its freedom.

Equip the intelligence agencies with clear directives and resources to conduct deniable acts in enemy land similar to Islamabad’s terrorist acts, thus raising the cost to the enemy and making it prohibitive for Pakistan. This will hasten the disintegration of this tottering state. Two can play at this game with equal finesse.

Let Indian pressures build up from the east and west on Pakistan so that our embassy and other establishments are not targeted in the future.

The Indian Administrative Service has for too long  pretended to be the superior service without any skills. This service should actually be the national repository of highly skilled personnel. It is not. Hence, essentially, it neet to undergo a total revamp. Only fifty percent of the recruitment should be done direct at a young age. After three years of service in the district, these young civil servants must graduate in a one-year executive MBA course from top IIMs in India to hone their management skills. The balance of the fifty percent of the recruitment should be derived by lateral induction from the military, the police, revenue and financial services, intelligence agencies and any other field that will add to the knowledge base and in offering quality governance. This will not only enrich the IAS but also end the segmentation and compartmentalization where the left hand does not know what the right hand is doing. Just as we need a re-integrated population base in the Valley and the northeast for consolidation of  multi-cultural India, in the IAS as well, we require intermingling of specialist skills from various professions!

To defend the taxpayers’ millions of dollars invested in Afghanistan’s reconstruction program, move two integrated divisions with substantial air element in the area, in consultation with Kabul. Let Indian pressures build up from the east and west on Pakistan so that our embassy and other establishments are not targeted in the future.

The Bush administration’s flawed strategy that Western forces without India’s support will win in the Afghanistan-Pakistan region is misguided and counter-productive. They cannot win without New Delhi’s direct involvement. The Obama administration urgently needs to change this policy in Washington’s interest as they are in the midst of Huntington’s Clash of Civilizations. It is radical Islam versus the Rest. Choices are limited — either you swim across or sink!

Similarly, New Delhi should learn to fight its own war instead of expecting others do its dirty work. Therefore, simultaneously equip and marshal the military forces on a war-footing, removing all deficiencies including the human resources, as war at an appropriate time of our choosing remains an open option. Limited war is a misnomer. Hone the military machine for an all out war, if and when necessary.

We should stop tying up our forces internally in an endless no-win game. This will lead to rendering our security apparatus blunt and ineffective…

Pakistan is aflame with internal contradictions. The stage is getting set for disintegration. Balochistan wants independence from Islamabad. So do Sindh, FATA and NWFP. The recruitment for both, the army of Jihad and the Pakistan army is primarily sourced from Pakistan’s Punjab. In many cases while one brother joins the army, the other joins the Jihad factory. Thus, a deep connectivity that cannot be rooted out exists between the Pakistan army and the forces of Jihad. Similarly, the deep mistrust between Punjabi-mussalman dominated Pakistan and others is irreparable with the result that all Pak nukes perforce have to be kept within the province of Punjab. Besides, the Americans clearly appear to have joint control over the nuclear arsenal. Therefore, India and other threatened states essentially require neutralizing a geographically small territory of Pakistan, i.e., Punjab to stabilize the region.

We should stop tying up our forces internally in an endless no-win game. This will lead to rendering our security apparatus blunt and ineffective, and may well result in their disintegration. The helplessness of the under-trained and under-equipped police was on display during the attack in Mumbai. Therefore, instead of permitting our forces to disintegrate in the long term, it is sensible to take this war to Pakistan and make them pay the price.

It is time India woke from its slumber.

15 thoughts on “Take the war to the enemy”