The test was carried out at the DGA’s missile test range in Biscarosse by a production Rafale fighter deployed by the DGA’s flight-test center in Cazaux. The AASM was fired from an extreme off-axis angle (90°) at a range exceedin g 15 kilometers. 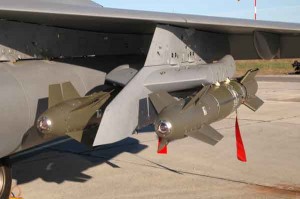 The impact was at a very low angle, against a moving target represented by a laser spot generated by a ground illuminator mounted on a turret, to simulate a vehicle moving at a speed of 80 km/h.

Using its algorithms for detection and slaving of the trajectory to the laser spot, plus its excellent maneuverability, the AASM hit its target to within less than one meter. This firing test demonstrates the AASM Laser’s ability to offer 1-meter accuracy against highspeed, agile land or maritime targets. Coupling this performance with its standoff firing capability, the AASM is unrivaled in the market for tactical air-to-ground weapons. It perfectly meets the precision and opportunity strike requirements highlighted by recent operations.

The inertial/GPS/laser-guided version of the AASM is fitted with a semi-active laser seeker, and features algorithms to track fixed or highly mobile targets during the terminal phase. It will enhance the operational flexibility already offered by the AASM family, including two versions that have been qualified for firing by the Rafale multirole fighter: inertial/GPS and inertial/GPS/infrared.

The laser terminal guidance version of the AASM will enter volume production for the French air force and navy starting at the end of 2012.