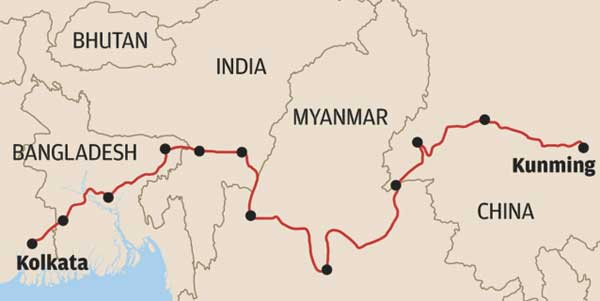 The modernisation of the PLA during the last two decades in tandem with its economic growth has increased China’s confidence in its capability to protect the country’s economic and strategic interests worldwide.

China’s economic prosperity has enabled it to emerge as the global leader not only in manufacturing but also in consumption of raw material. This has triggered China’s appetite for energy and natural resources enormously, setting it on a global quest to meet its needs. And South Asia’s natural resources are likely to be increasingly exploited to meet China’s needs.

The global economic downturn four years ago has had its adverse impact on China’s export based economy slowing down its double digit growth rate. China has taken a number of corrective measures including improving internal consumption and opening up new markets of Asia, Africa and South America. China is also increasing its trade and investment in these new markets. The modernisation of the PLA during the last two decades in tandem with its economic growth has increased China’s confidence in its capability to protect the country’s economic and strategic interests worldwide.

China’s increasing strategic presence in South Asia has to be viewed in this global environment. China’s moves would undoubtedly contribute to optimize the rapid growth of the vast underserviced South Asian markets while increasing the import of Chinese products. However, these developments would progressively reduce India’s dominant influence in the sub continent and Indian Ocean Region (IOR) with the progressive increase in China’s strategic reach to the Indian Ocean littorals.

These activities have increased ever since President Xi Jinping and Premier Le Keqiang came to power in March 2013. They are functioning under the guidelines set by the Chinese Communist Party (CCP) 18th National Congress held in November 2012. In accordance with these guidelines, Xi Jinping’s development targets for China are:

The PLA Navy is emerging out of the South and East China seas to meet its aspirations to become blue water naval force by the next decade.

Xi has set about clean up the public image of the CCP and the PLA launched the ongoing large scale anti-corruption drive to weed out and prosecute corrupt party bosses and army officers.

Xi is also paying special attention to bring the PLA’s professional competence on par with the modern armies of the West. The modernisation of the PLA is focused on intense training for joint operation skills in a C3IS networked system.

Increasing attention is being given to improve PLA Navy’s fleet operation skills with the addition of an air craft carrier, and submarine and surface ships. Thus the PLAN is emerging out of the South and East China seas to meet its aspirations to become blue water naval force by the next decade.

China has tried to rework its strategic equation with the U.S., European Union, Japan, ASEAN region and India in keeping with the changing global environment.

PLA’s progress has enabled President Xi to assert China’s power in support of its territorial claims in South and East China seas and India. This has caused concern not only among China’s Asian neighbours, but also to the U.S. as it poses a direct threat challenge to the U.S.’ allies and poses a challenge to America’s domination of the Asia-Pacific region.

The emergence of China as a major power has increased its profile in the international arena including the UN. The U.S. has made extremely cautious in dealing with China. Countries like Japan, India, Korea, Vietnam and Russia, who have unpleasant historical experiences with China have also become equally cautious.  China has tried to rework its strategic equation with the U.S., European Union, Japan, ASEAN region and India in keeping with the changing global environment. These developments also have strategic connotations for India.

China’s South Asia connectivity projects underway also have a broader context to the ambitious China Western Development (CWD) plan started in 2000. It involves six provinces (including Yunnan) and five autonomous regions including Tibet and Xinjiang bordering India. As per 2002 estimate this backward region forms 71% of China’s area but contains only 28.8% of its population contributed only 19% of China’s economic output as of 2009.

The multi-faceted CWD plan involved development of transport, hydropower plants, and telecommunications infrastructure, improve ecological protection, promotion of education and retention of talent within the region for exploiting the abundant natural resources.

China’s influence will further increase in South Asia on the completion of the four road links and port infrastructure it is building. These are designed to improve China’s physical and maritime access to Pakistan, Nepal, India and Sri Lanka.

The 1956 km long Qinghai-Tibet rail link between Xining and Lhasa was completed and now trains regularly run from Beijing, Chengdu, Shanghai, and other important cities to Lhasa. They have increased PLA’s strategic mobility to the sparsely populated areas of Xinjiang and Tibet which have been facing unrest among Uyghur and Tibetan ethnic minorities. Similarly China’s logistics and military capability have been augmented with the road communication to the Sino-Indian borders improving the access to support China’s territorial claims in India.

These developments carried out under the 12th Five Year Plan (2011-2015) is giving form to the country’s vision to economically integrate its backward western regions with the hope of neutralising separatist separatist influence.

China’s influence will further increase in South Asia on the completion of the four road links and port infrastructure it is building. These are designed to improve China’s physical and maritime access to Pakistan, Nepal, India and Sri Lanka. China also has plans to construct railway lines from Xinjiang and Tibet to provide rail connectivity from China to South Asia.  China has also started promoting the 21st Century Maritime Silk Road to ensure the port infrastructure it has created in Pakistan, Sri Lanka and Bangladesh are made commercially viable. Chinese projects to construct pipelines for transporting petroleum resources using some of these ports would also increase China’s strategic sustainability free of choke points in sea lanes of communication in Southeast Asia.

The PEC now under construction with China’s aid and assistance is an ambitious development programme  that connects Gwadar port in Southwestern Pakistan with Kashgar in Xinjiang autonomous region by road, rail and pipelines for transporting petroleum resources. It consists of three segments –

Among South Asian nations, India’s relations with Nepal are perhaps the most complex, subjected to periodic crests and troughs. Nepal is sandwiched between the two Asian giants India and China. This makes it vulnerable to political changes in either country. In a way Nepal may be called “India-locked” as former Nepalese Prime Minister Bhattarai once described as the country’s socio-economic interactions have been almost exclusively with India. For some years now, Nepal had been trying f to free itself from India’s overwhelming influence. Geographically Nepal remains the soft underbelly of India’s strategic security because of its domination of the fertile Gangetic plans of India linking Eastern India.

Nepal had requested China to extend the rail link to Kathmandu. When China fulfils this project, it would significantly improve China’s strategic access to India’s most populated regions in the North.

China does not have the historical socio-political baggage India carries in its relation with Nepal. China has used Nepal’s desire to follow an independent foreign policy to step up its influence after the fall of monarchy in Nepal. China has now mustered Nepal as a partner in its ambitious plans to extend its strategic land and railway links to South Asia.

The Friendship Highway links Lhasa to Zhangnu on China-Nepal border leading to the Sino-Nepal friendship bridge at Kodari in Nepal. This 800 km long road also forms part of the China National Highway 318 from Shanghai to Zhangnu. From Kodari the Araniko Highway provides road access to Nepal’s capital Kathmandu.

In 2007-08, China began constructing a 770-kilometre railway connecting Lhasa, the Tibetan capital, with the border town of Khasa in Nepal which was completed last year. Nepal had requested China to extend the rail link to Kathmandu. When China fulfils this project, it would significantly improve China’s strategic access to India’s most populated regions in the North. Chinese are also involved in other communication projects now underway beyond Kathmandu.

Among them, China’s plans to build a road link between Kathmandu and Lumbini, an important Buddhist pilgrimage site located very close to Indian border, is the most important one. The Chinese government-backed Asia Pacific Exchange of Cooperation Foundation (APECF) agreed to provide $ 3 billion assistance for the Lumbini Development Project (LDP). The APECF had also to begin a survey for construction of a direct fast railway link between Kathmandu and Lumbini as part of the LDP. Though the funding got mired in controversy and stalled the project, it is likely to be revived when the concerns of India, Japan and South Korea are resolved on its impact on the holy seat of Lumbini.

One thought on “Strategic perspectives on China’s South Asian connectivity”