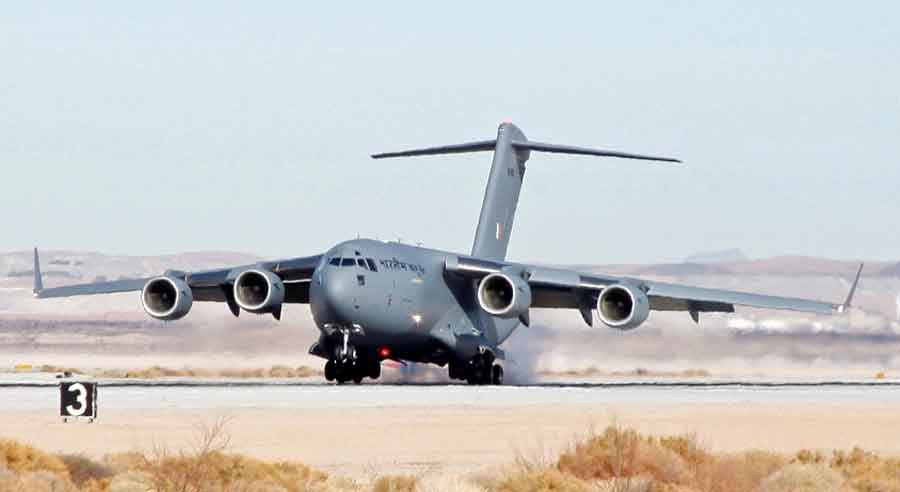 India’s security challenges along with the growing economic needs and interests thereon will result in a continuous shift and changing profiles of threat and power equations. Its area of interest will expand way beyond the borders right up to Antarctica in the South, Africa to the East, Central Asian Region (CAR) in the North and South China Sea to the South East. Therefore, the nation’s strategic airlift capability supported by sea controlling Navy and long reach fighter aircraft will be imperative to support India’s futuristic security needs.

India surges ahead in underscoring its strides into the Asian age with a fast growing economy at an astounding rate of nearly eight per cent. As per the report of February 09, 2015, published in the Indian national daily ‘The Hindu’ India is set to grow 7.4 per cent and cross the $2.1-trillion mark this year against 6.9 per cent in 2013-2014. India grew 7.5 per cent in the October-December quarter, according to the estimates released, overtaking China’s 7.3 per cent growth in the same quarter, to become the fastest growing major economy in the world.

Concurrently, India is also strengthening the fundamentals of its strong armed forces by aiming at self-reliance. Virtually at the threshold of swinging into a modernising overdrive through the ‘Make in India’ mission, India has set the tone for some serious business. Strong economy and enhanced economic progress would entail trained and well-equipped armed forces not only to protect its territorial integrity but also her economic interests worldwide.

Ensuring impregnable land borders along with a credible blue water capable Indian Navy combined with the continental reach of the Indian Air Force will enable India to protect and project sovereignty in the Indian Ocean Region (IOR) and beyond. The role of India’s armed forces in future will extend thereon beyond the role of defending traditional land borders and Sea Lanes of Communications (SLOC), Exclusive Economic Zone (EEZ) and into domination of the Indian Ocean and its littorals. Joint Force tasking will be the order of the day and that will involve protection of Indian economic interests on lands or at sea that could well be far beyond the Indian subcontinent.

The security challenges that a resurgent India will face in the 21st century are diverse. Alongside a conventional and a nuclear threat from Pakistan to its West and a rising and assertive China to its North and the East, India will continue to grapple with internal security threats and cross-border terrorism. Hence, dealing with homeland security would assume equal importance along with the strengthening of our defences all across at sea, on land and aerospace frontiers.

The contemporary definition of ‘national security’ thus has expanded beyond protection of borders. It includes socio-economic factors that influence the well-being of the nation and its diaspora in the extended neighbourhood. In a country as diverse as India, maintaining law and order as part of internal security is a great challenge wherein intermittent spurts of violence may require quick deployment/reallocation of forces within the country at a very short notice. Apart from the primary role, the armed forces will continue to play a crucial role during disaster management. Timely relief efforts in case of natural or man-made disasters to mitigate the adverse effects of the calamity as also towards rehabilitation, the military machinery will have to keep itself always geared up.

Energy security requirements dictate that India’s strategic calculus encompasses the IOR from the Gulf of Aden to the Strait of Malacca or the South China Sea. India needs to work with the international community for protecting and securing the Sea Lanes of Communications and her vital economic and energy interests. Globalisation necessitates India to protect its inter-linked interests with its regional partners. Also, India has emerged as a capable and responsible regional power that may be called upon to play a significant role in responding to existing and emerging challenges for the stability of the IOR and the South Asian region. These may include power projection, as it did in the case of Maldives (Op Cactus). Not only will this require swift response, it may also entail logistics support to sustain forces for significant length of time. With a large number of expatriates spread across the globe, India has to be prepared to evacuate its citizens from global hot spots, if necessary, as it has successfully done in the past and recently successfully carried out the evacuation of 4,000-odd Indian citizens stranded in Yemen.

The world order in the twenty-first century is entering a phase of multi-polarity. India and China have already signalled the coming of the Asian Age, emerging as the fastest growing economies of the world. A transformation from developing countries to the developed ones would mean a huge requirement of natural resources, the engines of economic power. These countries will be the world’s largest consumers of oil and natural gas, essential for propelling their economies. The quest for securing natural resources has already driven them beyond their territorial limits into the darkness of the African continent, desolate regions of Central Asia and the contentious South East Asia.

The expanding sphere of conflict in the Arab world extending from Morocco to Afghanistan has recently added Yemen to the list. The nature, shape and scope of this conflict may be difficult to predict accurately but the trends suggest it is fast transcending in to a major regional inferno. This is likely to have an adverse bearing on India’s energy security. It may well force a country like ours into seeking military options in protecting her vital interests if the turn of events threatens her economic stability.

India’s security challenges along with the growing economic needs and interests thereon will result in a continuous shift and changing profiles of threat and power equations. Its area of interest will expand way beyond the borders right up to Antarctica in the South, Africa to the East, Central Asian Region (CAR) in the North and South China Sea to the South East. Therefore, India’s strategic airlift capability supported by a sea controlling Navy and long reach fighter aircraft will be imperative to support her security needs in the future.

War related, peace keeping or humanitarian aid missions will be the starting point for choosing the national or multi-national military capabilities. Therefore, the strategic airlift remains a critical supporting capability that should be achieved, maintained and improved. This will ensure the ability to deploy and sustain military forces across possible distant battlefields. The combat effectiveness, protection, sustainability, and mobility of our military forces are highly important objectives, and that is why the enabling capabilities of long range air transport are so critical.

India has to be prepared to evacuate its citizens from global hot spots, if necessary…

Large range of possible operations in different regions will allow India to make a credible contribution to regional stability. Over the time, our armed forces need to remain inter-operable with those from friendly foreign countries. They will also need to be deployable, sufficiently self-reliant, versatile and adaptable. Our international interests require that we must retain the ability to contribute with combat capabilities when required. The general result should be a projected force structure that retains and enhances its current mix of capabilities, enabling it to operate in distant places.

Generally speaking, the term ‘capability’ is used to describe the personnel, equipment, platforms and/or other material that affect the capacity to undertake military operations. More specifically, ‘capability’ is “The power to achieve a desired operational effect in a nominated environment, within a specified time, and to sustain that effect for a designated period. Capability is generated by some fundamental inputs such as organisation, personnel, collective training, major systems, supplies, facilities, support, command and management.”

Airlift capability represents, “the total capacity expressed in terms of number of passengers and/or weight/ cubic displacement of cargo that can be carried at any one time to a given destination by available airlift.” It consists of two distinct types, strategic and tactical airlifting. Typically, strategic airlifting involves moving materiel, weapons and personnel over long distances (across or off the continent or theatre), whereas a tactical airlift focuses on deploying resources and material into a specific location with high precision.

Military strategic transport aircraft are distinguished by their load capacity (cargo and passengers) that they are able to carry and by the distance (range) they can cover. Strategic airlifters are generally larger and can fly longer distances than tactical ones. Aircraft which perform this role are considered strategic airlifters such as Lockheed C-141 Star-lifter,  Lockheed C-5 Galaxy,  Boeing C-17 Globemaster III,  Ilyushin Il-76 Candid  or Antonov An-124 Ruslan  in contrast with tactical airlifters such as the C-130 Hercules,  Lockheed Martin C-27 Spartan  and Transall C-160,  which can normally only move supplies within a given theatre of operations.

The C-141 Starlifter fulfils the vast spectrum of airlift requirements through its ability to airlift combat forces over long distances, inject those forces and their equipment either by air, land or airdrop, re-supply employed forces and extract the sick and wounded from the hostile area to advanced medical facilities.

The C-141B is a stretched C-141A  with in-flight refuelling capability. Stretching of the Starlifter consisted of lengthening the plane 23 feet, 4 inches (53.3 centimetres) which increased cargo capacity by about one-third – 2,171 extra cubic feet (65.13 extra cubic metres). Lengthening of the aircraft had the same effect as increasing the number of aircraft by 30 per cent. The C-141 was the first jet aircraft designed to meet military standards as a troop and cargo carrier.

The C-141 has an all-weather landing system, pressurized cabin and crew station.

The Starlifter, operated by the USAF Air Mobility Command, can airlift combat forces, equipment and supplies, and deliver them on the ground or by air drop, using paratrooper doors on each side and a rear loading ramp. It can be used for low-altitude delivery of paratroopers and equipment, and high-altitude delivery of paratroopers. It can also airdrop equipment and supplies using the container delivery system. It is the first aircraft designed to be compatible with the 463L Material Handling System, which permits off-loading 68,000 pounds (30,600 kilogrammes) of cargo, refuelling and reloading a full load all in less than an hour.

The C-141 has an all-weather landing system, pressurized cabin and crew station. Its cargo compartment can easily be modified to perform around 30 different missions. About 200 troops or 155 fully equipped paratroopers can sit in canvas side-facing seats, or 166 troops in rear-facing airline seats. Rollers in the aircraft floor allow quick and easy cargo pallet loading. A palletised lavatory and galley can be installed quickly to accommodate passengers, and when palletised cargo is not being carried, the rollers can be turned over to leave a smooth, flat surface for loading vehicles.

In its aero-medical evacuation role, the Starlifter can carry about 103 patients, 113 ambulatory patients or a combination of the two. It provides rapid transfer of the sick and wounded from remote areas overseas to hospitals in the United States.