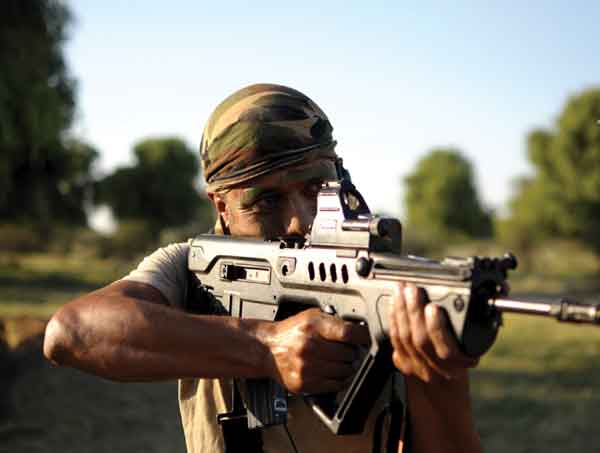 As per media reports, Army’s move to source fabric for its combat uniforms from the private sector because of huge price differential between the uniforms procured from Ordnance Factories and those available locally with the “same cloth”, has Ordnance Factory employees up in arms.

The Army letter also says that if procured from private vendors in the “same volume” as through Ordnance Factories, the price of each combat uniform set will likely cost Rs 1,200-1,300. This implies saving of Rs 2850-2950 per combat uniform set.

However, according to media, the All-India Defence Employees Federation has written to the Chief of the Army Staff saying that if the Army starts purchasing cloth directly from private sector, there is no guarantee that required standards would be met. The letter states that Ordnance Factory employees purchased several samples of Army Logo Cloth from different shops in Delhi Cantonment and all samples failed chemical as well as physical tests.

Most surprisingly, this letter goes on to say that the MoD has “assured” Ordnance Factory employees that combat uniform would not be declared a “non-core” item and there was no justification for the Army seeking a no-objection certificate. This, despite the Army when asking for the no-objection certificate clearly stated that the “same cloth” is available with private vendors.

If the MoD is arbitrarily taking the decision that Army cannot seek no-objection certificate, doesn’t it confirm the MoD-DRDO-OFB cabal that is pocketing huge profits both over and under the table in the name of defence? And, what is the crap about combat uniform cloth cannot be declared non-core item when it is available across the country with private vendors? All this is not to discount the biggest joke of quality of products being bandied about, of which the users should be concerned, not those who are engaging in money-making without accountability.

If the Army is not “justified” to seek an annual saving of Rs 1,42,50,00,000 – Rs 1,47,50,00,000, just for one solitary item without loss of quality, then the Ordnance Factories need to be shutdown and the concerned MoD officials sacked. Of course, MoD will probably tell the Army Chief to “lump” the costs but it is high time that Defence Minister Nirmala Sitharaman takes stock of the situation. She may have joined the BJP in 2008 but wouldn’t it surprise her to know that when the contract amounting to some Rs 100 crore was awarded for supply of the 50th Anniversary Independence Medal to all security forces of India (not Armed Forces alone), MoD demanded one fifth the price under the table before awarding the contract to private sector? That is why all categories of medals are available in the bazaars, marketed by the same sources – perks of paying the bribe.

The same is followed in the case of particular combat uniform cloth, as all other items. And this has been going on decade after decade.

What the Defence Minister must critically examine is that if the Army is being fleeced of Rs 1,42,50,00,000 to Rs 1,47,50,00,000 annually just for solitary item of combat dress, what is the overall amount in lakhs of crores if all items are taken into account, who is pocketing the money individually or otherwise, and how is this system allowed to continue, which amounts to not just fleecing the Armed Forces but more like waging economic terrorism while subjected to two successive negative budgets including the current one?

Is it that the ‘cabal’ cannot be dislodged because enormous amounts are also offered for elections irrespective of which government is in power? After all, money for elections is the primary reason for corruption in India, as pointed out by the 1993 Vohra Committee Report. More significantly, shouldn’t this business of ‘core’ and ‘non-core’ items be seriously reviewed, which requires commonsense, not palming it off to another committee.

The combat cloth in question is produced by private mills, not Ordnance Factories, and where private sector is coming in for manufacturing of aircraft and helicopters, why this resistance to stitching combat uniforms by private sector? The best kept secret is that the bulk stitching of combat uniforms is also outsourced by Ordnance Factories, which can be verified from Ordnance Factory, Kanpur. So, can you have a more institutionalized corrupt set up – buy cloth, outsource stitching, and charge the Army four times the price?

An interesting post on Facebook reads, “The lack of development in Indian Defence Sector can’t be blamed on no presence of joint ventures but on an organization called DRDO. You would be surprised to the level of incompetence of this organization. The government never felt the need to allow privatization because of the presence of an organization solely to carry out defence research. Whenever a requirement was established by the forces, the government would give DRDO the responsibility to develop that product.

Unfortunately, the folks at DRDO never develop anything. Most of their products have been develop through down collaborations in which Indian component were bare minimal. They eat away tax payers’ money and live maintain lavish lifestyles (having personally known a few).  Many in the DRDO have lobbied against complete privatization since they will lose out on their relevance should this happen”. In this context, the 2012 article ‘The secret world of DRDO’ (http://corruptionindrdo.com/the-secret-world-of-drdo-the-new-indian-express/) also needs to be critically examined by the Defence Minister for corrective action notwithstanding the requirements of political statements.

To give due credit to the present government, it has shown inclination for privatization, even as some private think tanks known for biased leanings hollering about the dangers of privatization, as if this was going to be executed overnight. Some minor tinkering by way of disinvestment has also been announced, like 10% in HAL, but it doesn’t amount to much change. Sure the government is contemplating major changes in the OFB, which administers 42 armament and ammunition factories. Some noncore areas of weaponry to the private sector, including ammunition production have been opened up, and now the plan is to identify some factories and tie up these with private-sector defence companies; the four units identified for the public-private partnership (PPP) model being Small Arms Factory, Ordnance Factory Tiruchirappalli, Rifle Factory Ishapore and Ordnance Factory Korwa. The majority of the products that are being produced by the OFB are of Russian origin, but it is mostly of assembly nature with very little technology absorption. As such, the level of indigenization is very low.

But the above intended moves for privatization are being vehemently  opposed by the governmental defence employees. Three defence employees unions, the All India Defence Employees Federation (AIDEF), Indian National Defence Workers Federation (INDWF), and the Bharatiya Pratiraksha Mazdoor Sangh (BPMS) are preparing for massive demonstrations in Delhi on December 28, followed by indefinite strike, a decision to the effect having been adopted on October 12, in a joint declaration by the Struggle Committee of Defence Civilian Employees to Save Defence Industry, a forum consisting of AIDEF, INDWF and BPMS.

The joint declaration has also criticized: government’s decision to give licenses to 222 private companies for defence manufacturing; ease the license policy with 100% FDI being allowed for products including those being manufactured by Ordnance Factories; “arbitrary decision” to outsource 143 items being produced by Ordnance Factories, and; decision to stop  production of military vehicles at the Vehicle Factory Jabalpur.

The Defence Minister reportedly has already been informed of the impending strike through a letter. The letter states that if decisions taken by MoD regarding 41 Ordnance Factories, Army Base Workshops under Corps of Electronics and Mechanical Engineers (EME), Depots under Ordnance Services Directorate and Military Farms are implemented, there will be far-reaching consequences; implications being most adverse for the 216-year old Ordnance Factories and its employees as well as the other defence establishments.

The government will need all its acumen to handle these protests and indefinite strikes. These protestors can hardly be lathi-charged by Delhi Police, as military veterans were subjected to on 14 August 2015 and 30 October 2017. Besides, these protestors would have backing (however indirect) by the above mentioned cabal resident in the MoD-DRDO-OFB.

As significant is the fact that the impending indefinite strike has been planned in conjunction with other Indian workers going on indefinite strike with district-level mobilizations in its run up set to begin in January 2018. It needs no intelligence to guess that these mass protests will likely be with state elections during 2018, and general elections of 2019. That foreign forces, many inimical to India, will be party to the skullduggery is unquestionable.