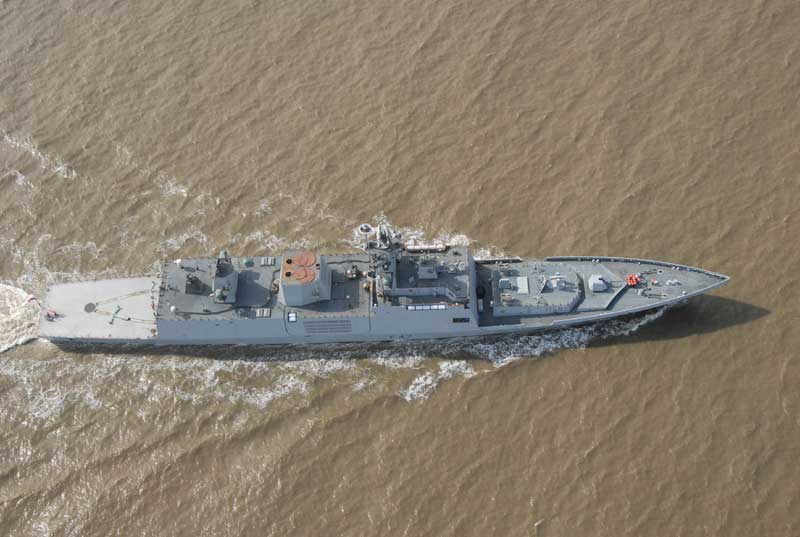 Providing stealth features in the design of a warship will entail additional costs. It has been reported that Visby stealth Corvette costs 50 per cent more than a conventionally built Corvette of the same dimensions. The projected cost of the future US Navy DD(X) Zumwalt is $2.8 billion which represents a significant increase. However, the DD(X) will offer full-spectrum signature management to cloak it from a variety of detection and targeting methods. In spite of the higher costs, stealth features are now considered amongst the key requirements around which a warship will be designed and built.

There has been a significant shift in Warship Design in the past two decades to incorporate stealth. For example, the Shivalik Class frigates in India, Type 45 destroyers in United Kingdom, La-Fayette Class frigates in France, Visby Class corvettes in Sweden and many more. On the other hand, in case of DD(X) Zumwalt Class destroyers in the United States, the very cost of stealth led to decisions in favour of a more traditional tried-and-tested warship. It may be appreciated that a stealth warship cannot provide intimidating power projection off the coast to potential enemies if they do not find/detect that you are there. Moreover, stealth cannot guarantee platform safety and integrity, once the first salvo is fired. We cannot forget the threat from small stealthy fast boats manned by pirates/terrorists as in the instance of the damage done to the destroyer USS Cole.

Nevertheless, there is growing demand to evolve stealthy warships to enhance their survival. The primary aim of stealth is to reduce platform susceptibility, increase survivability and therefore, to prevent damage and reduce demands on defensive systems. Low signatures make the detection of a ship more difficult to locate and lends it more reaction time.

The primary aim of the stealth technology is to render the warship invisible to enemy detection systems such as radar and magnetic sensors by reducing levels of reflected radiation and at the same time, lowering the warship’s own emissions. The various signatures and cross-sections include radar, thermal, acoustic, magnetic, communications, optical & bioluminescence and research is discovering more. Radar cross-section can be reduced by use of radar absorbent materials, use of low probability of intercept transmission, remove corner reflectors, break-up of superstructure and meta-materials.

The basic principle of a radar is very simple. Visible light (wavelength 400 nm to 700 nm) is part of Electromagnetic Spectrum covering waves such as X-rays, Gamma rays, ultraviolet radiation which all have more energy than visible light and also waves of greater wavelength such as infra-red, radar and Very Low Frequency (VLF) waves used to communicate with submerged submarines. If these electro-magnetic waves are sent in the form of short pulses which strike an object with flat surface, some of the wave energy will be reflected back to the radar receiver. If the elapsed time from the transmission of a short radar pulse to the time the echo is received is measured, the wave speed allows the contact range to be calculated. All electro-magnetic waves travel at the same speed as the speed of light in vacuum i.e. 3×10 (8 times)m/s. If it is 2ms, the range will be 300km. The size of the target’s image is measured by its RCS and is expressed in square metres. However, this area does not equal its geometric area.

A perfectly conducting sphere of projected cross-sectional area of one metre square i.e. 1.13m diameter, when measured in a test rig will have an RCS of one square metre. Those materials should be incorporated into warship superstructure and outside surfaces which have a very low radar reflection coefficient such as plastics, carbon composites or GRP. RAMs, usually foams which can be overlaid with specified paints, are also included wherever possible. RAM is normally composed of a combination of dielectric and ferromagnetic materials. Dielectrics can be thought of as slowing waves down whilst, ferromagnetic materials will absorb them. RAM has both narrow and wide band absorbing features. Ship geometry is of vital importance. Dihedrals and trihedrals (where two or three surfaces meet together at 90 degrees) must be eliminated at all costs. Both of these geometries will strongly reflect radar energy over a wide angular range directly back to the search radar.

The USA is developing Adaptive Water Curtain Technology (AWCT) to deflect and scatter enemy radar waves from the searching radar system thus reducing the ship’s RCS. The AWCT system consists of highly conductive sea water pumped up and sprayed in a fashion that effectively creates an angled radar reflective spray curtain around the ship for a short period of time. The use of many adjustable nozzles could allow the overall shape of the curtain to be controlled and permit windows of opportunities to operate the ship’s own radar and sensors, and fire various guns and missiles between descending screening curtains of water. The existing pump technology for the control of multiple pumps after some adaptation could be capable of generating a faceted variable angled curtain that could help to reduce RCS and thus defeat the threat of dangerous sea-skimming anti-ship cruise missiles.

For a modern warship, the importance of minimising emitted sound cannot be underestimated…

Ships radiate or lose heat from their exhaust plume, funnels, vents, open hatches, recently fired guns, recently embarked helicopters and other features. These platform emissions are radiated into the environment and by virtue of the atmosphere’s transparency, these heat wavelengths may be detected over very great distances. Thermal heat sensor systems operate passively and provide very little warning. The present generation of heat seeking missiles is non-imaging. It is, therefore, easy to defeat heat seeking missile with a more attractive source of heat. If there is enough time to deploy the decoy source.

Heat seeker missiles will target the Middle Infra-Red (MIR) band of the electro-magnetic spectrum in the range between three to five millionth of a metre whilst the true thermal imagers watch and identify in the range of eight to fourteen millionth of a metre. New generation of three to five millionth of a metre imagers will render current heat seeking counter measures less effective. Infra-red emissions can generally be divided into two parts: the so called Infra-Red Cross-Section (IRCS) which is the total emitted power from a target, and the Infra-Red Signature (IRS), which is the target’s detailed distribution of heat emitters. If the ship’s IRCS is adequately reduced, it will enhance the overall effectiveness of the decoy systems.

Imaging sensors can, however, see both the IRCS and IRS allowing for the possibility of actual image and target identification. To avoid identification, it is thus vital to reduce both IRCS and IRS. IRCS contributors mainly include gas turbine exhaust plumes usually operating between 300 to 500 degrees Celsius. The exhaust gases leave the ship’s funnel forming a vertical plume which as it expands begins to cool. Plume shapes and temperatures will tend to vary with different engines and operating conditions with different platforms having relatively well-defined visible plume characteristics. Although gases are generally quite poor infra-red radiators, as the plumes themselves contain extremely hot carbon particles which can radiate extremely well, they are easy to detect. Cold air blowers are introduced to reduce the metal uptake temperature. And to turbulently mix hot plume gases with further cold air as quickly as possible so the plume disperses quickly. Engine exhausts are often separated from funnel’s outer casing, to surface temperatures further. It is usually practical to position engine compartments near the waterline, so the sea surface can provide some measure of masking against sea–skimming missiles.