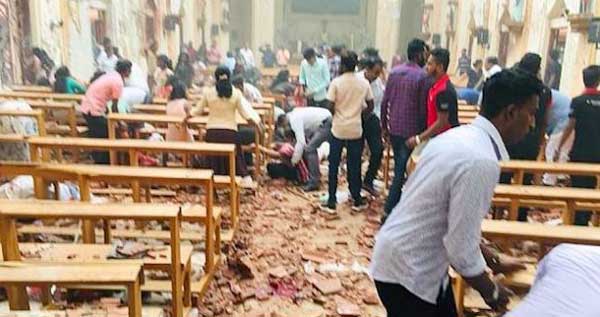 The horrendous Easter Sunday bombing in Sri Lanka have claimed 359 killed till last count including 49 foreigners and some 600 injured. St Anthony’s Church in Colombo, St Sebastian’s Church in the western coastal town of Negombo and a church in the eastern town of Batticaloa targeted were full of devotees on account of Easter Sunday prayers. Similarly, the three five star hotels targeted (The Shangrila, The Cinnamon Grand and The Kingsbury) were full, tourism being in upswing after the 30-year ethnic war with LTTE ended a decade back.

Sri Lanka announced that National Thowheeth Jama’ath (NTJ) was responsible for the attack; NTJ having come to notice only last year when it was linked to the vandalizing of Buddhist statues. As Sri Lanka was blaming NTJ, ISIS was already releasing photographs of Colombo, Negombo and Batticaloa suicide bombers. Sri Lankan Defence Minister Ruwan Wijewardena has announced that these terrorist bombings were in response to the Christchurch massacre on March 15, 2019. The ISIS has eventually claimed responsibility. These Easter Sunday bombings were similar to the bombings of three churches in Indonesia on May 13, 2018 claimed by the ISIS

ISIS perhaps decided to respond to the Christchurch bombings in Sri Lanka instead of New Zealand given the tightened security in the latter, lowering of security in Sri Lanka post LTTE war, and using an unobtrusive terror outfit like NTJ which was not expected to undertake terror attacks on this scale with such coordination. It is unlikely that ISIS did not consider New Zealand but a comparative assessment would have pointed to Sri Lanka for immediate response, not that New Zealand would not have been earmarked for suitable response in the future.

Sri Lankan Prime Minister Ranil Wickremesinghe has said that he and his cabinet ministers had not been informed of the warning. Apparently, only those involved in VIP security were cautioned about the intelligence inputs. 10 days before the bombing attacks, Sri Lanka’s police chief,  Pujuth Jayasundara, had issued a warning top police officers, saying, “A foreign intelligence agency has reported that the NTJ (National Thowheeth Jama’ath) is planning to carry out suicide attacks targeting prominent churches as well as the Indian high commission in Colombo.” R&AW had warned Sri Lanka perhaps after monitoring the larger network of Tawhid Jamaat headquartered in Tamil Nadu, India.

The Sri Lankan administration possibly took the above warnings as routine for religious holidays. For that matter, India had been receiving foreign intelligence inputs since mid-September 2008 about the intended Lashkar-e-Taiba (LeT) attacks in Mumbai, later even about the LeT vessel leaving Karachi for Mumbai. But lack of coordination and urgency facilitated LeT terrorists to launch multiple attacks in Mumbai on November 26, 2008, killing at least 174 people including civilians, security personnel and nine of the terrorists, while one terrorist was captured, 26 foreign nationals among the dead.

The ‘defeat’ of the ISIS has been propagated by the West in recent times. In this context, James B Comey, then Director FBI had said on July 27, 2016, “Eventual victory against the Islamic State could well lead to an uptick of terrorist attacks in the West, not a reduction in them   ….. hundreds of really dangerous people, and they are going to flow primarily to Western Europe, but some could well end up in the United States”. But ISIS cadres have ‘also’ been successfully diverted elsewhere. The fable of al-Baghdadi having been killed many times over and resurrecting has been circulating. But Baghdadi is merrily ensconced in the Anbar Desert under the watchful eyes of those who assisted the rise of ISIS and keeps visiting Syria and Iraq at will. Isn’t it surprising that after the ‘defeat’ of ISIS, it has captured Al-Kawm town in Homs Province of central Syria north of al-Sukhnah and south of Raqqa for the first time in two years?

ISIS may have lost territory but is alive and kicking. On April 20 this year, Saudi Arabia foiled a terrorist attack in Al-Zulfi in Capital city of Riyadh for which ISIS claimed responsibility. ISIS has been attacking armed forces of the Democratic Republic of the Congo (DRC); a recent attack in area of Bovato near the border with Uganda resulted in killing of three DRC soldiers and wounding five.  ISIS recently attacked the Ministry of Telecommunication and information in Kabul. Al-Hawl Camp in Hasaka Province of Syria houses some 70,000 families of ISIS, with substantial presence of ISIS cadres. ISIS cadres have spread to Europe, Central Asia and Afghanistan – participating in the ‘Great Game’ in Central Asia and Afghanistan as hired by their paymasters.

Post IPKF’s return from Sri Lanka in 1990, an ISI colonel posted as deputy high commissioner in Pakistan’s mission at Colombo organized the ‘Osama Brigade’ amongst Muslim Tamils in northern Sri Lanka for terrorist acts in south India. But that was not all. In 2012, Amir Zubair Siddiqi, posted at Pakistan’s High Commission in Colombo was booked by Tamil Nadu police after he sent money from Colombo to a suspected ISI man. Pakistan recalled Siddiqi in October 2012, but quietly posted him back to Colombo after one year. Siddiqi’s name again cropped up after a tip off from Malaysian intelligence enabled the IB to foil an ISI attempt to attack two foreign consulates in south India. It was Siddiqi who trained Tamil Muslim Zakir Hussain and sent him to India to recruit individuals for terror activities. Zakir Hussain was arrested in 2014 by Tamil Nadu police but later released, and has since fled to Malaysia.

Sri Lanka needs to acknowledge that where Pakistan is coordinating the Islamic State of Khorasan Province (ISKP) in Afghanistan, it is very much the coordinating link between the ISIS and the NTJ.  This would be hard to digest because Pakistan won over its confidence by arming Sri Lanka in subjugating the LTTE. But not recognizing the indications would be to Sri Lanka’s disadvantage. The Tamil problem in Sri Lanka too is far from over since Sri Lanka has done little towards devolution of powers to the Tamils it had promised.

The Easter Sunday bombings have shattered the illusion of peace in Sri Lanka. This has been the biggest terror act in South Asia by the ISIS. Sri Lanka’s tourist industry has taken a hit, which will affect its economy and in turn its capacity to pay back China. Most importantly, by selling itself more and more to China, Sri Lanka appears oblivious to the strategic ramifications of the centre of gravity shifting to the Indian Ocean Region (IOR). Whether advertently or inadvertently, Sri Lanka has put itself in cross hairs of geopolitical rivalry of global players. And, it would be prudent to acknowledge that Pakistan can hardly be trusted since it will dance to the tune of both China and the West.

As they say there are no permanent friends and enemies in geopolitics; it is national interests that always matter.  Interestingly, a former Mossad officer had scripted few years back of three camps in vicinity of Tel Aviv; one training NSG of India, second training Sri Lankan Navy personnel on flat bottom boats that Israel was selling to Sri Lanka for operations in lagoons, and third camp training LTTE cadres on how to destroy those flat-bottom boats. Will Sri Lanka become the centre of the new ‘Great Game’ in the IOR? True Pakistan prides itself about the propensity with which it handles terrorist organizations but there are other global players who have played these games since even before and with greater finesse. That Sri Lanka may see more violence in coming months is high possibility.

It has been mentioned in these columns earlier many times that our adversaries are focused on igniting the tinder box in south India, what with Al Qaeda, LeT and ISI footprints in Kerala since early 2000s and ISIS-Al Qaed-ISI lodgment in Maldives, Sri Lanka and Bangladesh.  Move of large number of Rohingya cadres to Tamil Nadu is also part of a larger game plan. India needs to be ready for every eventuality.

One thought on “Sri Lanka’s bloody carnage, ISIS and more”