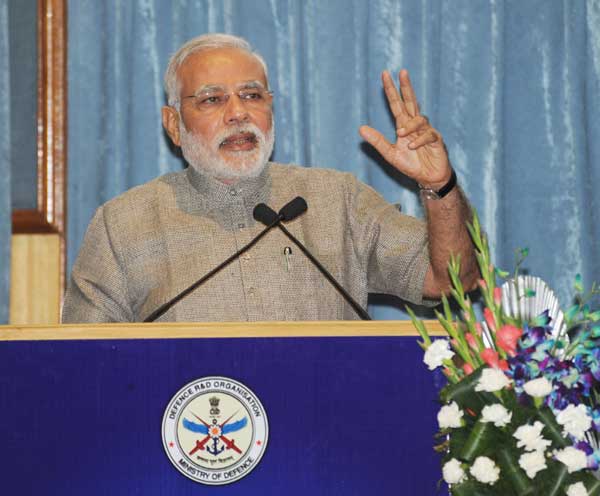 The Prime Minister Narendra Modi has called upon Defence Research and Development Organization (DRDO) to speed up projects and advance delivery schedules. He has opined that India can be world leader in defence technology and show the world way forward.

Those in the MoD, who exercise control over DRDO, are blissfully ignorant of what defence equipment is all about. In weapons, they can’t tell gun from a howitzer and in engines, cam shaft from crank shaft.

These are very high expectations and there is nothing in DRDO’s past performance to generate such great hopes. Infact the record of this organization is extremely dismal and disappointing. There is no accountability and it has never been put through a science audit, inspite of repeated demands for the same

On the urging of Parliamentary Committee on Defence, a revamp of DRDO was carried out. Nothing much happened, except for some cosmetic changes, which are of little consequence. We continue to import even low technology equipment where over 70 percent of weapons and equipment is imported. Think of the out go of foreign exchange and jobs lost.

While the Prime Minister is unaware of the DRDO capabilities and potential, but surely, Arun Jetley, the part time defence minister, who has been in parliament for a long time and is expected to have paid attention to debates on defence matters, ought to know better and therefore should  have briefed the Prime Minister to lower his expectations from this organisation. In the past these very false hopes of delivery by DRDO has kept in limbo, the deployment of private industry in this field.

The DRDO budget has been 5 to 7 per cent of the defence budget with allocations for major projects such as LCA, Arjun tank etc being over and above this budgeted figure. Much of this amount has gone into civil works. If any proof of this lavish expenditure is required, one need go no further than have a look at the DRDO office complex at the rear of South Block and then ofcourse see Sena Bhavan as well.

Those in the MoD, who exercise control over DRDO, are blissfully ignorant of what defence equipment is all about. In weapons, they can’t tell gun from a howitzer and in engines, cam shaft from crank shaft. Projects can hang fire for decades while those responsible for these continue to move up the promotion ladder and so do those of the MoD who control them.

There is little understanding and mutual confidence between the DRDO and the defence services. The Prime Minister is aware of the disconnect and that is why he impressed upon the DRDO to involve user in the development of military weapons and equipment. The DRDO never spells out its technological status in relation to the equipment to be developed. With the result, GSQRs are prepared without proper interaction with the DRDO, but keeping in mind what is already in the market.

The DRDO in stand-alone mode has achieved little and will not be able to meet the future needs of the armed forces.

DRDO never seeks the scaling down of the GSQRs to a level which it can handle projects, in the full knowledge and belief that the project can be dragged on endlessly and that no one will be called upon to account. Once a project is taken on, complete secrecy prevails and service officers posted with these establishments are kept out of the loop.

The DRDO in stand-alone mode has achieved little and will not be able to meet the future needs of the armed forces. It has shown little skill and capability in the field of even reverse engineering of comparatively simple equipment. This is legacy of Nehruvian policies of entrusting all this to Public sector ( DRDO in this case. )  Since then vested interests have opposed any change in this moribund policy.

When USSR broke up, some governments of East European countries offered to shift state of the art defence industries to other countries. India spurned these offers, while China took two thousands scientists and some of the defence industrial units. In India there is a politico-bureaucratic nexus which has successfully thwarted such moves, for obvious reason. There is so much money to be made in imports. Augusta helicopter being, the more recent example.

However government did go in for military technology cooperation with the Russian government and later with some others for joint development of cutting-edge defence technologies. So far this has been a one-sided affair, ending, essentially in transfer of technology and the attendant cost.

If the new government is to make a positive impact on the future indigenous development of defence technologies, production of such equipment within the country and export of the same, it need shed the hope of achieving this with only the DRDO efforts. It needs to consider some of these measures:

If the new government is to make a positive impact on the future indigenous development of defence technologies, production of such equipment within the country and export of the same, it need shed the hope of achieving this with only the DRDO efforts.

If we are serious in attracting high tech equipment manufacturing companies to collaborate with Indian companies then the FDI limit will have to be increased to 51 percent. The FDI limit of 49 percent announced by the finance minister was perhaps on advise of the babus and urgings by other with vested interests. The Prime Minister during his forth coming visit to U.S.A. must throw, open invitation to American defence industry to establish manufacturing facilities in India, in collaboration with Indian companies.

Unless the above listed steps are urgently taken, and the status quo broken, Prime Minister’s expectations of India developing high end defence equipment and becoming self sufficient in this field and being an exporter of such equipment, will remain a distant dream.