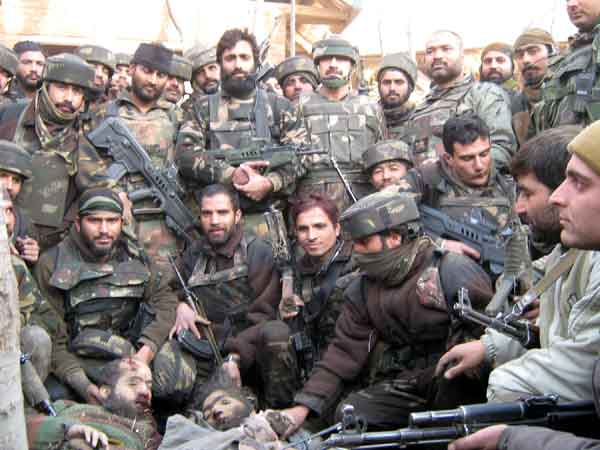 Historically, Indian Special Forces have been used for direct action type of roles during conventional wars. The hierarchal understanding of trans-border employment of Special Forces in India is short distanced physical or direct type of actions executed on a unit/sub-unit basis to achieve battlefield victories. There is no concept of them being used abroad other than in conventional war. While Special Forces should be central to asymmetric response including against irregular forces, asymmetric warfare does not automatically equate to a physical attack. A physical attack is only the extreme and potentially most dangerous expression of asymmetric warfare. The key lies in achieving strategic objectives through application of modest resources with the essential psychological element.

Indian history is replete with examples of special missions – from the Cholas to the Mauryas, from Shivaji to Rana Pratap and Maharaja Ranjit Singh and many others. In the aftermath of the Chinese aggression of 1962, independent India saw the advent of the Special Forces with establishment of the Special Frontier Force (SFF) amply covered in the media including during the 1971 Indo-Pak War and the conflict in Kargil in 1999 . In the Army, the initiative of raising a commando unit was taken in 1965 by Major Megh Singh with the blessings of the then Western Army Commander.

Recently, the Naresh Chandra Committee recommended the establishment of a Special Forces Command…

Over the years, a host of Special Forces have come up in India. Special Forces get mentioned periodically as part of counter-insurgency/counter-terrorist operations or events such as the United States Special Forces (USSF) raid that killed Osama-bin-Laden; but little has happened in India to optimise their potential in furtherance of national security objectives. Recently, the Naresh Chandra Committee recommended the establishment of a Special Forces Command.

The term ‘Special Forces’ is often misunderstood. The word “Special” should be sufficient to understand that such forces are to be employed primarily for strategic tasks beyond national borders. In his book ‘The Idea of Pakistan’, Stephen P Cohen writes “The task of Special Forces is the proxy application of force at low and precisely calculated levels, the objective being to achieve some political effect, not a battlefield victory.” This fundamental concept is ignored in India perhaps because we still do not have a National Security Strategy and have not defined our National Security Objectives, leave aside a national level Concept for Employment of Special Forces.

Ignorance and inability to grasp the strategic environment, its setting and compulsion under which such forces are employed, are evident. The impact of Special Forces operations is not well understood. Either their effects are overstated or fixated on tactical aspects of their missions. Keeping the military out of strategic decision making is one major reason.

Conflicts in the 21st Century

Warfare is no longer confined to the battlefield. Boundaries between war and no war are blurred by asymmetric wars that have no borders, no rules and no regulations. Psychological warfare imposes the largest penalty but affords the highest pay-offs. Successful psychological warfare demands integrated themes and subjects which need to be developed. In addition to causes of conflict such as territory, power and resources (water, energy and minerals) can become major flashpoints.

The impact of Special Forces operations is not well understood…

There is a heightened need for intelligence and deniable covert capabilities that ensure deniability of action for achieving strategic aims, both of which require the employment Special Forces. Transnational nature of threats and involvement of state actors in using sub-conventional conflicts have increased the complexity. Technology empowers terrorists to cause severe damage through cyber, financial and kinetic attacks. Acquisition of WMDs is a major concern. Asymmetric wars, of which terrorism and insurgencies are manifestations, will continue to dominate the conflict spectrum in the sub-continent albeit windows of conventional war under the NBC backdrop will remain.

A two-and-half front war is a reality but the ‘half front’ can enlarge with China-Pakistan surreptitiously fanning insurgencies in India. China-sponsored Nepalese Maoists are linked with Indian Maoists. Also, China is pumping weapons through the Kachen rebels in Myanmar to insurgents in Manipur and Indian Maoists. A namesake democracy in Pakistan and increasing radicalisation plus Chinese presence in Pakistan/POK with China’s support to Pakistan’s anti-India jihadi policy will heighten the threat. Chinese stance on Arunachal and other Indian territories will, in all likelihood, harden with the capability gap widening exponentially between the PLA and Indian Military and the former getting more assertive. 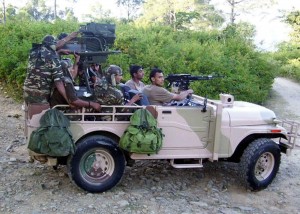 The covert presence of Chinese Special Forces and intelligence agencies in Pakistan, POK, Nepal, Myanmar, Bangladesh, Sri Lanka as part of PLA construction companies is possible. The Chinese “String of Pearls” is being augmented with a “Ring of Islamic Radicalism” courtesy Pakistan’s LeT, latest target being Maldives. Elaborately established terror infrastructure in India by Pakistan over the years will make it more and more difficult to point a finger at the latter.

Growing inter-dependence and inter-linking of terrorist groups and insurgents pan-India and their international links, particularly Islamic radicals and heightened asymmetric war including cyber war, activation of cyberspace and electromagnetic domains should be serious concerns. India must also manage social change ably without which the youth will polarise towards terrorism/insurgency.

Conflicts in recent years indicate that irregular/asymmetric forces have emerged with greater strategic value over conventional and even nuclear forces. We have failed to create deterrence against irregular forces relying only on diplomacy that by itself is not fully effective without integrating the military. Lack of strategic forethought has deterred us from exploiting the strategic potential of our Special Forces. India has suffered intelligence failures over decades. The recent discovery of some 11,000 Chinese in Pakistan/POK was courtesy the New York Times.

If we have Special Forces operatives covertly deployed in areas of our strategic interest, we will not be blind to future threats. The US discovered inadequacy of technical intelligence when Pokhran II surprised them completely. That is the reason they have operatives inside Iran for past several years. Covert Special Forces deployment in areas of strategic interest will significantly enhance our capacity to deal with multiple contingencies. There is urgent need to develop publicised overt capabilities and deniable covert capabilities as deterrence against the irregular war thrust upon us. Plus the will to selectively demonstrate it to ensure its effectiveness is needed. Our Special Forces potential must be optimised and exploited to develop such capability.

Wikipedia lists some 30 odd organisations as Special Forces of India, mostly police organisations but what could be considered as Special Forces actually are 8xArmy Special Forces battalions (two more are to be raised), MARCOS of the Navy (about 700 plus may eventually grow to 2,000, plus case for a Marine Brigade is pending with the government), Garuds of Air Force, 2xSpecial Groups (SGs) of SFF under the Cabinet Secretariat, the Aviation Research Centre (ARC) under the Cabinet Secretariat and 2xSpecial Action Groups (SAGs) of NSG under MHA (5,000 plus+ expansion of NSG is underway). These forces have hardly been strategically used for politico-military missions across the border.

Conceptually, Special Forces should be employed to continuously ‘shape the battlefield’…

Aside from routine UN missions, the only time India used Special Forces abroad was the three Special Forces units as part of the Indian Peace Keeping Force (IPKF) in Sri Lanka. The media often quotes parachute units as Special Forces, which is a misnomer. They are actually infantry battalions that have been trained for being delivered by parachutes. Upon landing, they operate as infantry battalions, holding ground till linked up. The combined strength of our Special Forces is around 20,000, much more than the uniformed strength of US Special Forces (currently 15,000) but not one tenth their capabilities. US SOCOM includes Psychological Operations and Civil Affairs Teams who are not uniformed personnel. With that strength, the USSF is deployed in 200 countries including India and we are milling around with a greater strength within our own country.

Historically, Indian Special Forces have been used for direct action type of roles during conventional wars. The hierarchal understanding of trans-border employment of Special Forces in India is short distanced physical or direct type of actions executed on a unit/sub-unit basis to achieve battlefield victories. There is no concept of them being used abroad other than in conventional war. While Special Forces should be central to asymmetric response including against irregular forces, asymmetric warfare does not automatically equate to a physical attack. A physical attack is only the extreme and potentially most dangerous expression of asymmetric warfare. The key lies in achieving strategic objectives through application of modest resources with the essential psychological element. They are ideally suited to control faultlines of the adversaries without any signatures or with ambiguous signatures.

14 thoughts on “Special Forces in India”