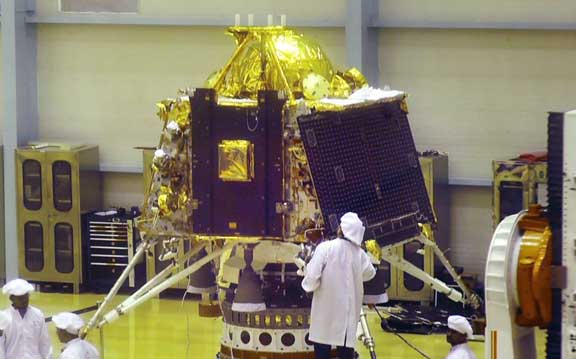 Preparations for space warfare and developing weaponry for it commenced globally decades ago. Its scope included ground-to-space warfare like attacking satellites from the earth – anti-satellite (ASAT) weapons, space-to-space warfare like satellites attacking satellites, as well as space-to-ground warfare for attacking targets on ground with kinetic energy and directed energy weapons (DEWs) on board vessels in space. A prominent example of space-to-ground warfare was China’s port of Tianjin struck on August 12, 2915, by Pentagon’s secret space-based kinetic weapon ‘Rod of God’ dropped from high orbit that instantly destroyed six city blocks on the edge of the city of Tianjin; described in Western media quoting Chinese dissidents as an act of “kinetic retaliation” by the Pentagon in response to China’s sudden Yuan devaluation the preceding day – August 11.

Weaponization of space has been ongoing over past several decades. Soviet Union’s unmanned space station ‘Polyus’ had a weapon platform equipped with a megawatt carbon-dioxide laser and self-defence cannon. But while this was essentially to guard against hostile boarding, America’s Strategic Defence Initiative (SDI) or ‘Star Wars’ program proposed in 1983 was far advanced with ‘kinetic kill vehicles’ or rockets fired from satellites to destroy ICBMs, and satellites carrying lasers to kill ICBMs / enemy space vessels. The SDI lay in cold storage till US President Donald Trump revived the US Space Program.  On June 18, 2018, the US announced plan to create the US Space Command as a new branch of US Armed Forces; the new service to be established by 2020. The erstwhile Russian Space Forces were reestablished in 2015 as a branch of the Russian Aerospace Forces. China’s Strategic Support Force established in 2016 is responsible for ‘space warfare’, ‘electronic warfare’, cyber warfare’, ‘intelligence’ and ‘technical reconnaissance’.

Advent of Electronic Space Warfare began in 1962 when the US exploded a ground-based nuclear weapon in space to test the effects of an electromagnetic pulse (EMP). Many Soviet and US satellites in space got de-activated by the EMP. This led to the ‘Outer Space Treaty of 1987, which banned nuclear weapons in space. Operations in space also concern the advantages of satellite based surveillance, communications, and positioning systems or mechanisms and denying the adversary of such advantages. It is in this context that NASA has recently launched twin satellites to study signal disruption in space. Since most of the global communications systems rely heavily on orbiting satellites, their protection is the reason that would motivate countries to deploy more space-based weaponry, especially in conflicts involving advanced countries having  access to space.

India’s space program over past six decades is acknowledged globally for its various achievements. India’s next lunar mission ‘Chandtrayan 2’ is slated to take off in July 2019. Minister of State (MoS) in the Department of Space (DoS), Jitendra Singh, while speaking to media about India’s space plans over next five years also spoke about India’s next big space mission, the maiden human spaceflight ‘Gaganyaan that is planned to be launched by or before year 2022. Gaganyaan will send two to three astronauts in space. In addition to existing ISRO facilities, a space research centre is being set up on the premises of Central University of Jammu and another space hub in the complex of NIT Agartala, Tripura. There are also plans to set up a hall of space technology in Pragati Maidan in New Delhi, to create awareness in public about ISRO’s space activities. ISRO has cooperative arrangements with many countries. Chandrayan 2 will be carrying NASA’s laser-enabled ‘retroreflector’, in addition to 13 Indian payloads. Now ISRO has announced India plans to launch its own space station by 2030.

India successful demonstrated its anti-satellite (ASAT) weapon capability in March 2019, joining an elite club of four nations with such capability; providing deterrence against adversaries who may want to attack Indian satellites to cripple systems in times of war. In its wake, an important step taken by the government has been to clear setting up of a new organization, called the Defence Space Research Agency (DSRO). As per news reports, the decision on DSRO was taken at the topmost level by the government “some time ago”, which indicates the that this decision was possibly taken before the 2019 general elections – under Prime Minister Narendra Modi during NDA II. The report goes on to say that the DSRO has started taking shape under a Joint Secretary-level scientist. The agency would be provided with a team of scientists which would be working in close coordination with the tri-services HQ Integrated Defence Staff (IDS) officers. DSRO has been entrusted with the task of creating space warfare weapon systems and technologies.

India’s Defence Space Agency (DSA) is already being set up in Bengaluru under an Air Vice Marshal-rank officer and will gradually take over the space-related capabilities of the three services. The DSA has been created to help the country fight wars in the space. How the DSA will fit into the entire gambit of space domain utilization in our country and efficiently perform its role for which it is being raised will unfold in coming years. The DSRO would be providing the research and development support to the DSA which comprises members of the three services.

On May 2-3, 2019, the Directorate of Indian Defence University (IDU), New Delhi, organized a workshop on ‘Space Warfare and Technology’ for senior and middle level military officers; covering Weaponization and Militarization of Space, preparation for Absorption of High-End Technology for Self-Sustenance in Space Operations, Space Innovations and Technology Exploitation, Inertial Navigation Systems and Sensors, legal aspects of military use of space, Building Capacity – Training, Human Resource and R&D, Adversarial Capability in Space Domain & Way Forwards. The speakers included members from the industry, academia, IITs, ISRO, DRDO, think tanks and Services. The workshop was well timed; coinciding with the setting up of the DSA and the three service energizing respective capabilities.

Another significant development is India’s first ever simulated space war exercise named ‘IndSpaceEx’ scheduled under aegis of HQ IDS in last week July 2019. All military stakeholders, including those from the scientific community, are to participate in IndSpaceEx, the purpose of which is to understand possible challenges in space warfare and to counter China’s growing influence in this domain, which poses a major threat to India’s national security interests; assessing the requisite space and counter-space capabilities that are needed by India to ensure our national security interests in this final frontier of warfare. Defence experts suggest that India also needs to focus on protecting our space assets, and that IndSpaceEx could pave way for more clarity on understanding challenges in this domain. Significantly, the US has been running an annual military exercise called ‘Space Flag’ at Peterson Air Force Base since 2017, simulating attacks on American satellites.

On June 11, 2019, India successfully launched the first test flight of its Hypersonic Technology Demonstrator Vehicle (HSTDV) from Abdul Kalam Island in Odisha. The missile is part of India’s efforts to develop a scramjet engine, which is considered the next frontier for future missile, aircraft and spacecraft technology. The test also holds immense learning potential for some programs of ISRO and for further development of the BrahMos-II cruise missile. India has also launched a Rupees 280 crore plan for island security to provide infrastructure and arrangements for computing for all central paramilitary forces. But the DSRO has a vast scope ahead, with directed energy weapons (DEWs) alone comprising lasers, linear particle accelerators or particle-bean based weaponry, microwaves plasma-based weaponry, especially since DEWs are more practical and more effective in a space (free of particle interference) compared to earth’s atmosphere. As important is to develop deniable crippling or destruction of enemy aircraft, drones, vessels and missiles.

India’s is getting focused on space warfare at the right time. China is much ahead in the game but if government maintains the right momentum, creating an effective deterrent should not take much time, including demonstrating its credibility to rogue adversaries, when required. However, two issues need to be borne in mind. First, space includes the domains of cyber and the electromagnetic. China has combined abovementioned five functions in its Strategic Support Force, including ‘space warfare’, ‘electronic warfare’ and cyber warfare’. This makes eminent sense because these functions overlap each other significantly. In contrast, our three newly created organizations (Defence Cyber Agency, Defence Space Agency and Special Operations Division) are separate and headed (one each) by Army, Navy and Air Force; on the concept of ‘equitable’ distribution. This should hardly be the criteria. There is merit in merging the Defence Cyber Agency and the Defence Space Agency and include electronic warfare in the tasking. This needs to be examined.

The second issue is to acknowledge that the sub-conventional character of conflict has gained prominence in recent years. Much that our media focuses on Pakistan and ignores China for whatever reasons, China is and will remain our main adversary in the foreseeable future till it resolves its border with India, of which China shows no inclination. Nepal has recently discovered China is gradually gobbling up Nepalese territory, China’s has consolidated at Doklam in Bhutan, and India has lost some 640 sq km territory to ‘salami  slicing’ tactics of China, which along with China’s illegal occupation of Shaksgam (5,180 sq km) and Aksai Chin (37,555 sq km), totals up to 43,280 sq km.  In this backdrop, space capabilities must be backed up by sufficient conventional and sub-conventional muscle, plus physical manning of borders with adequate infrastructure and logistics.